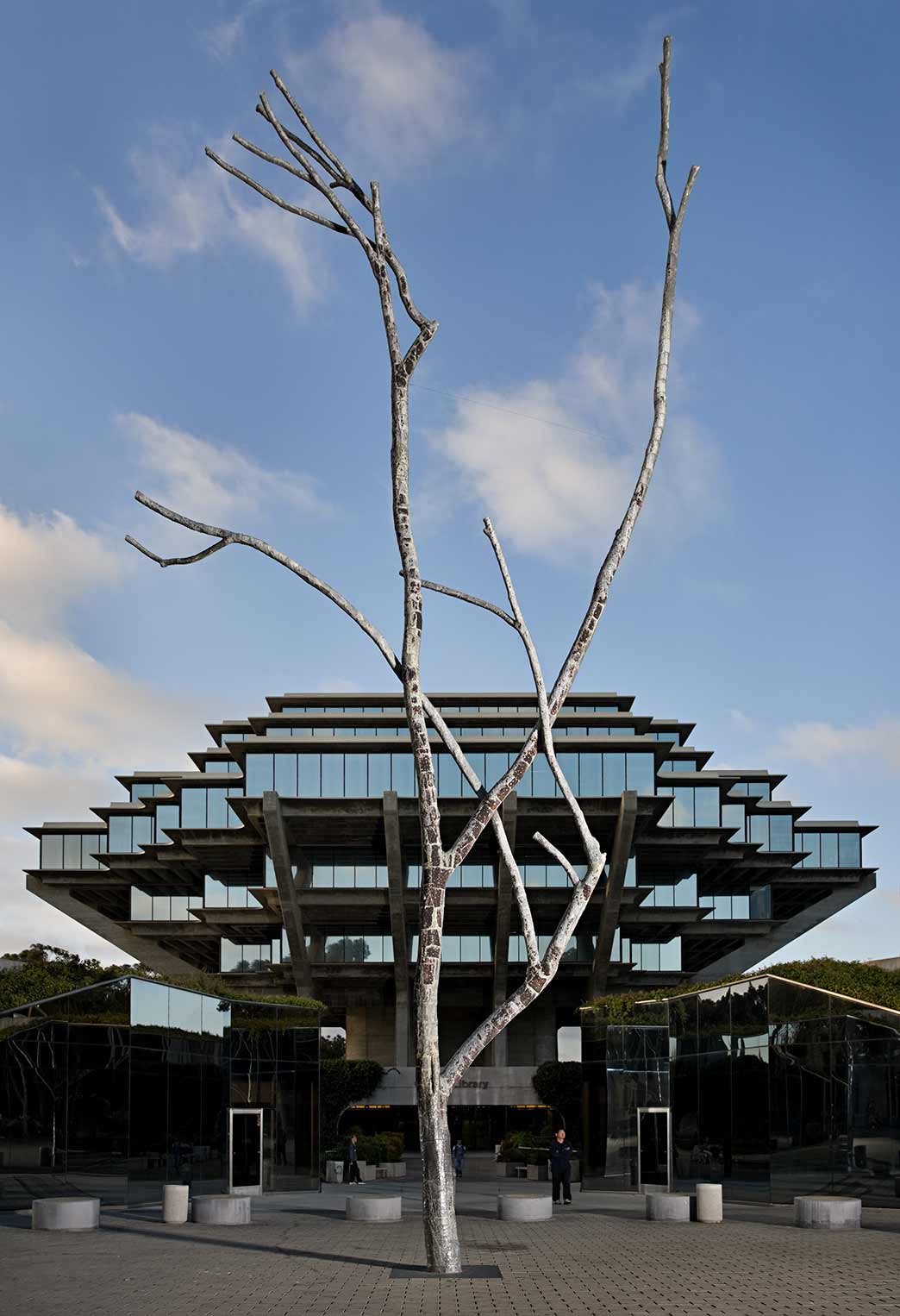 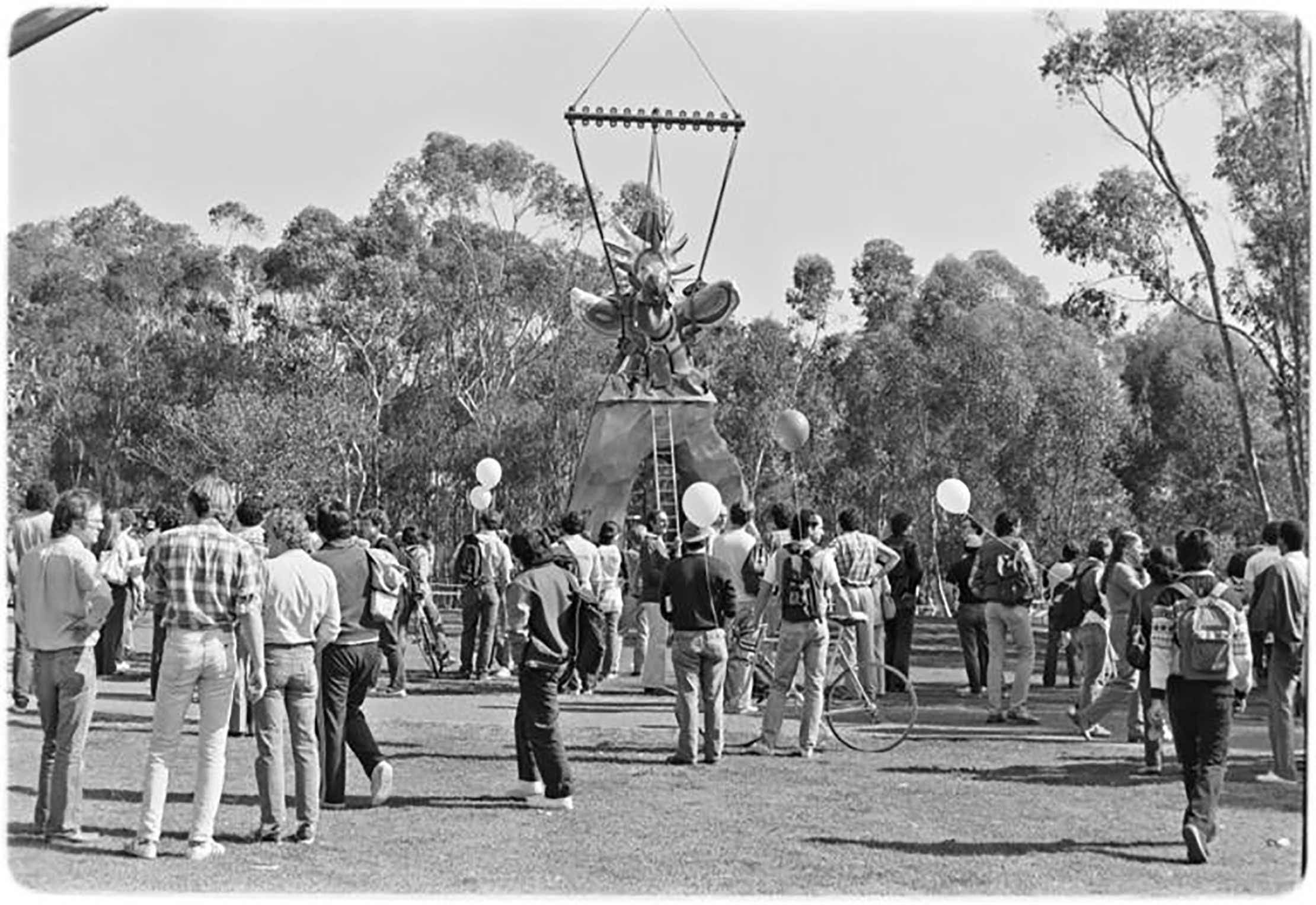 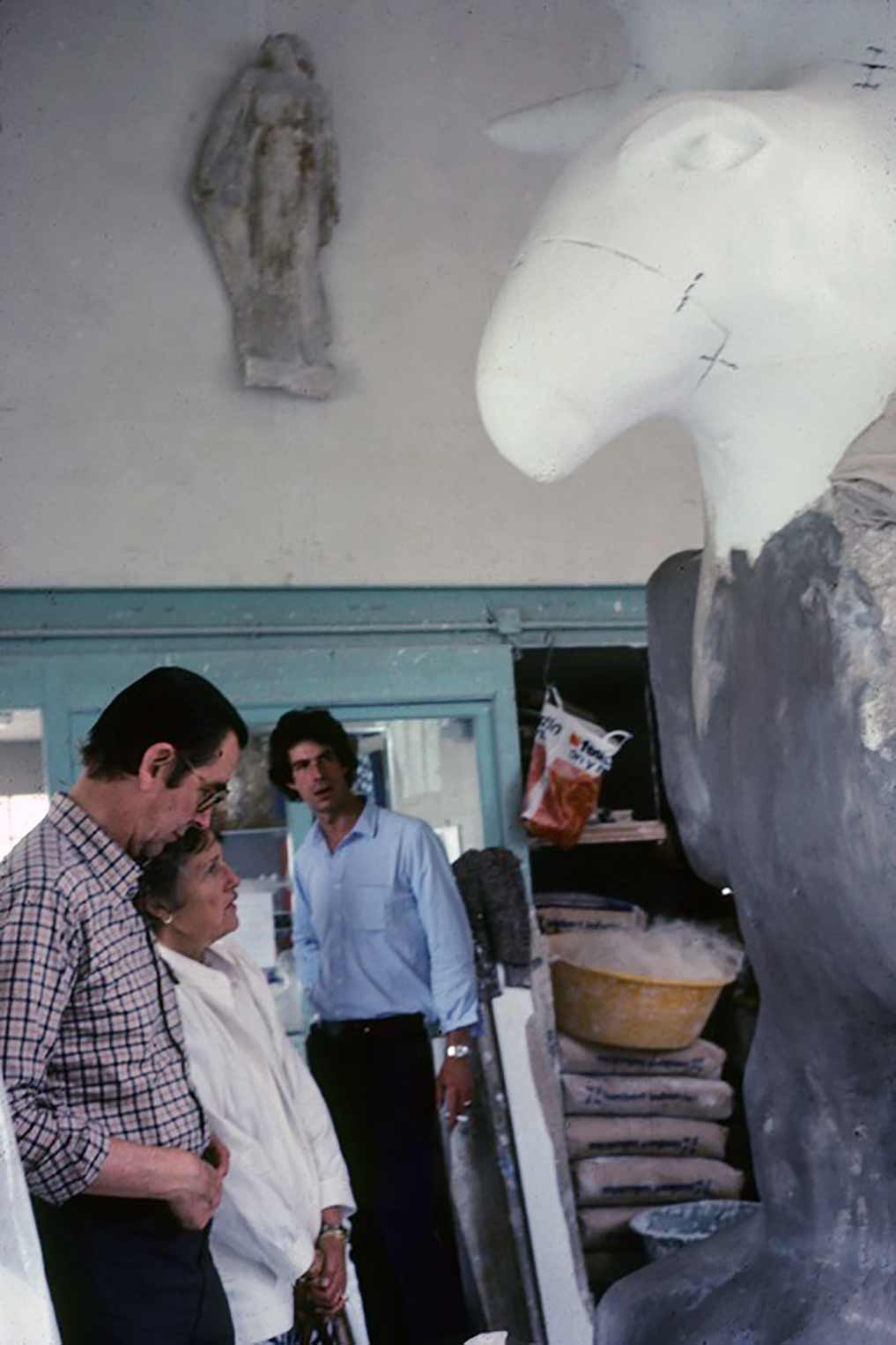 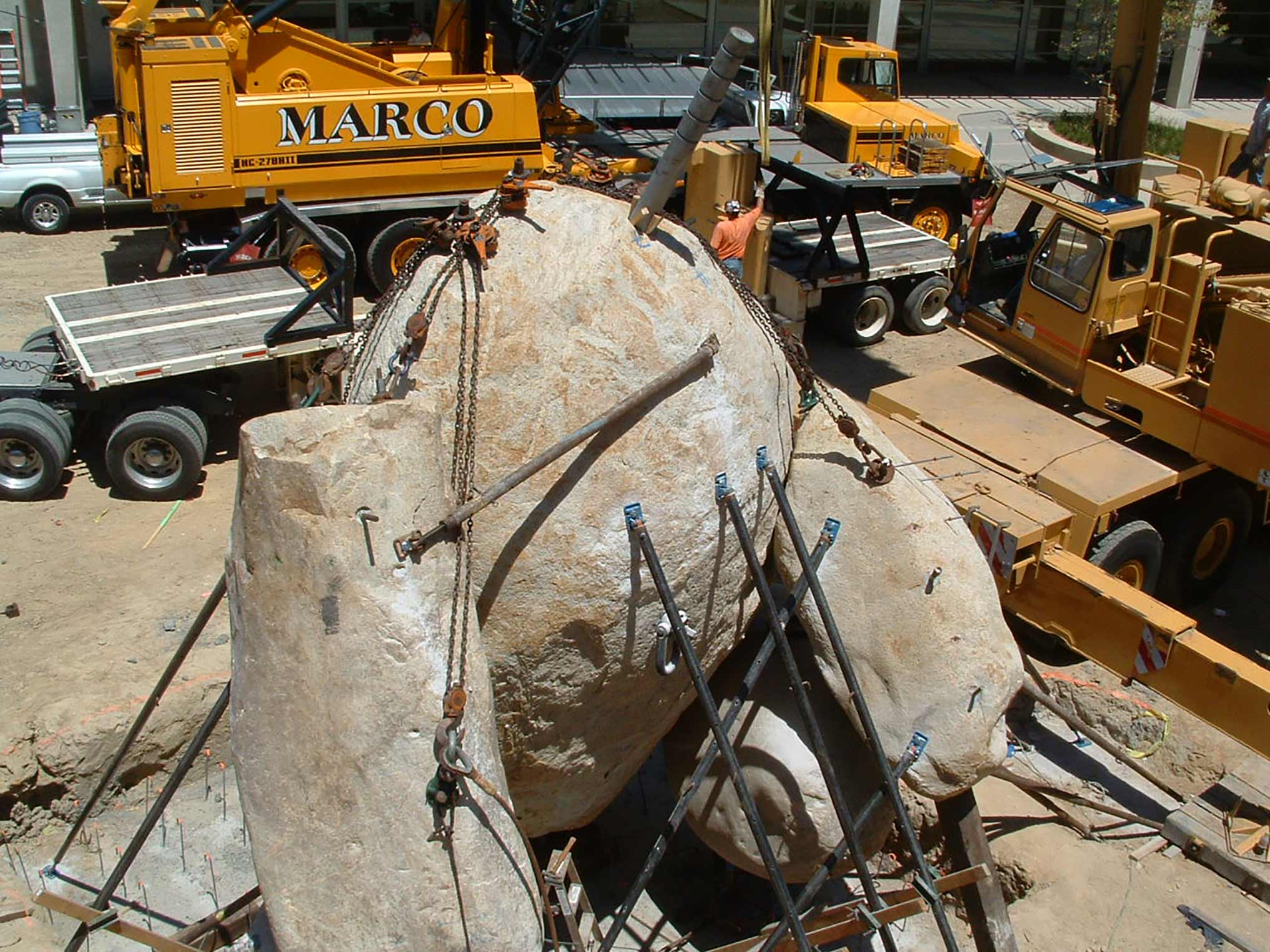 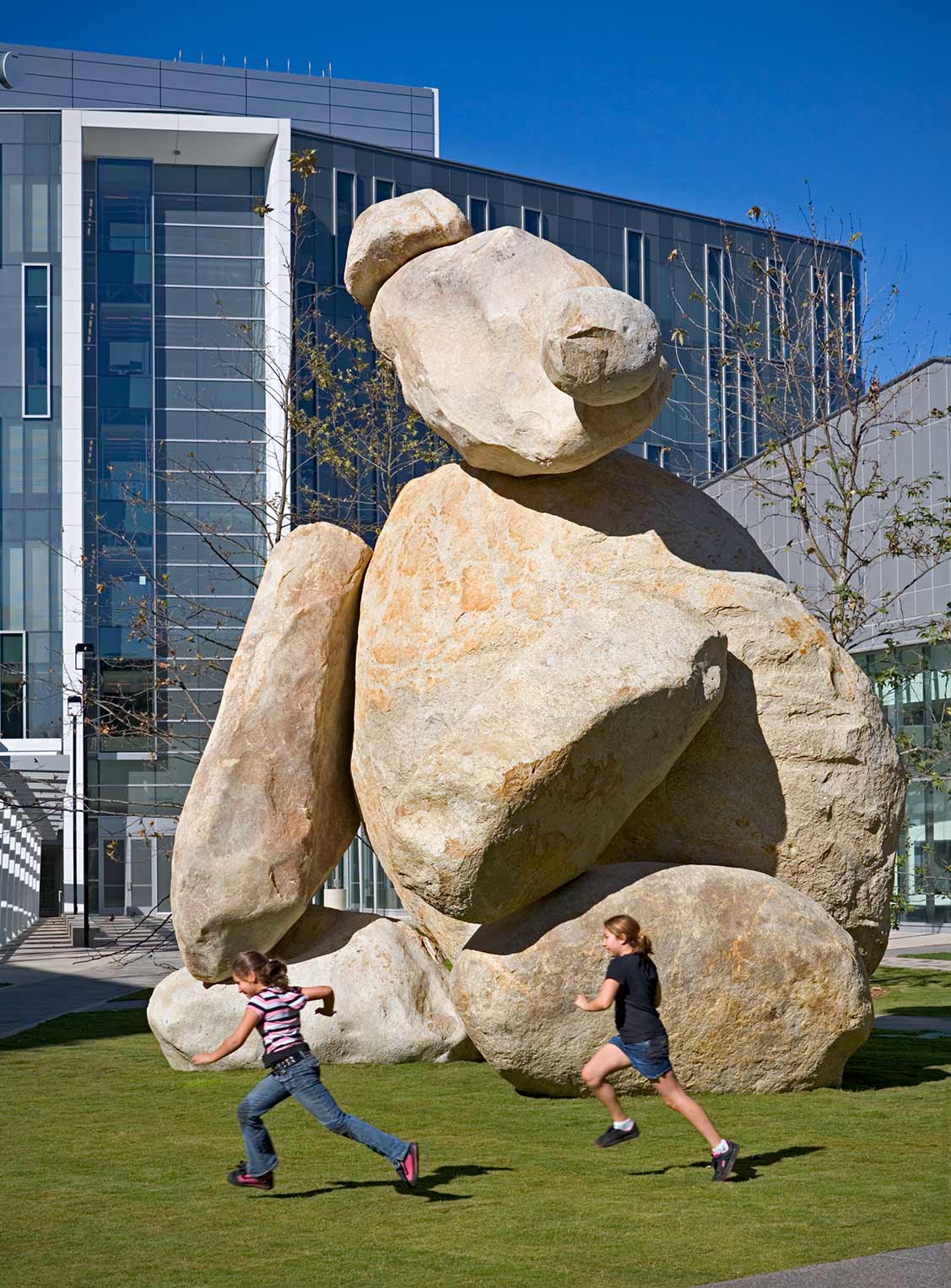 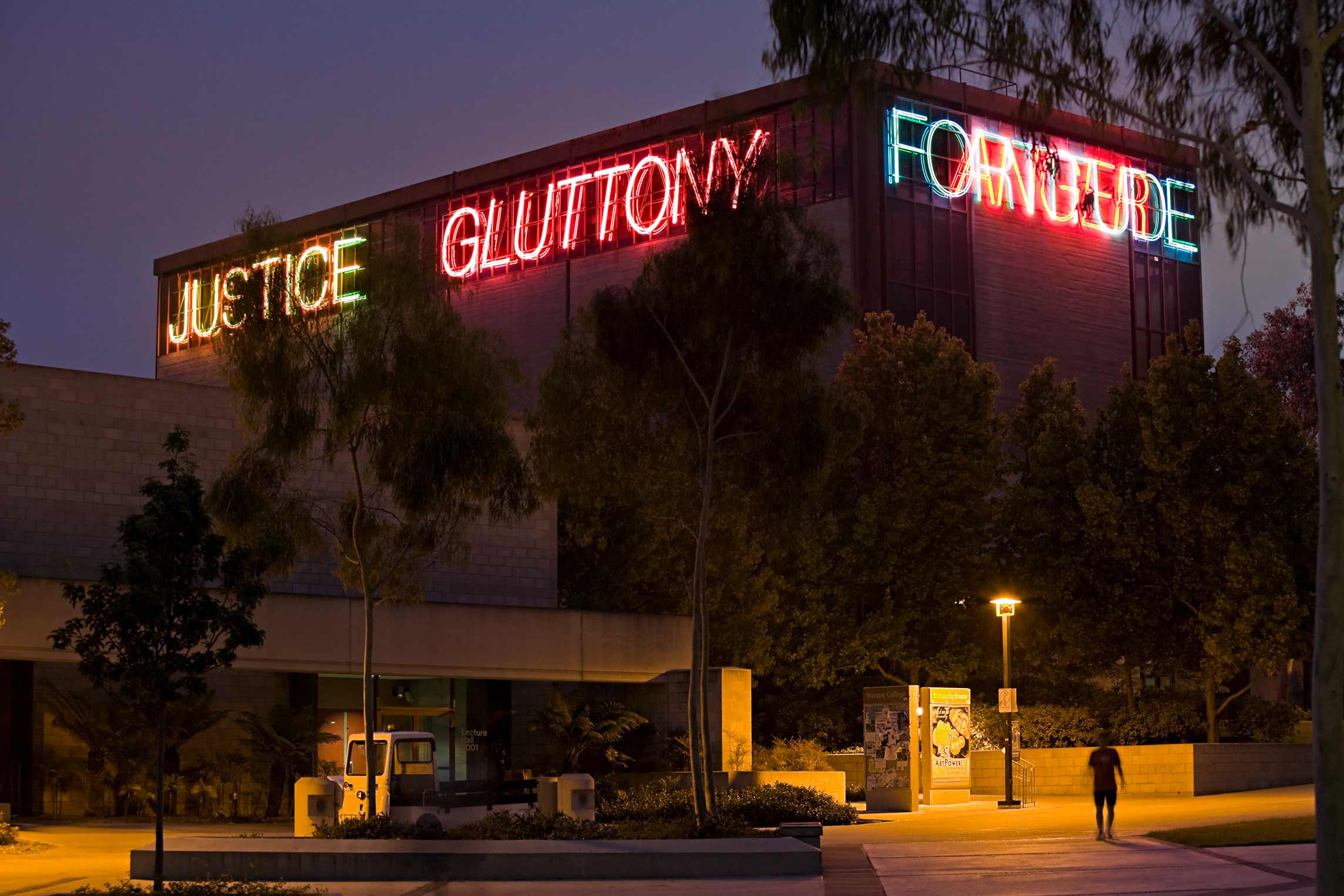 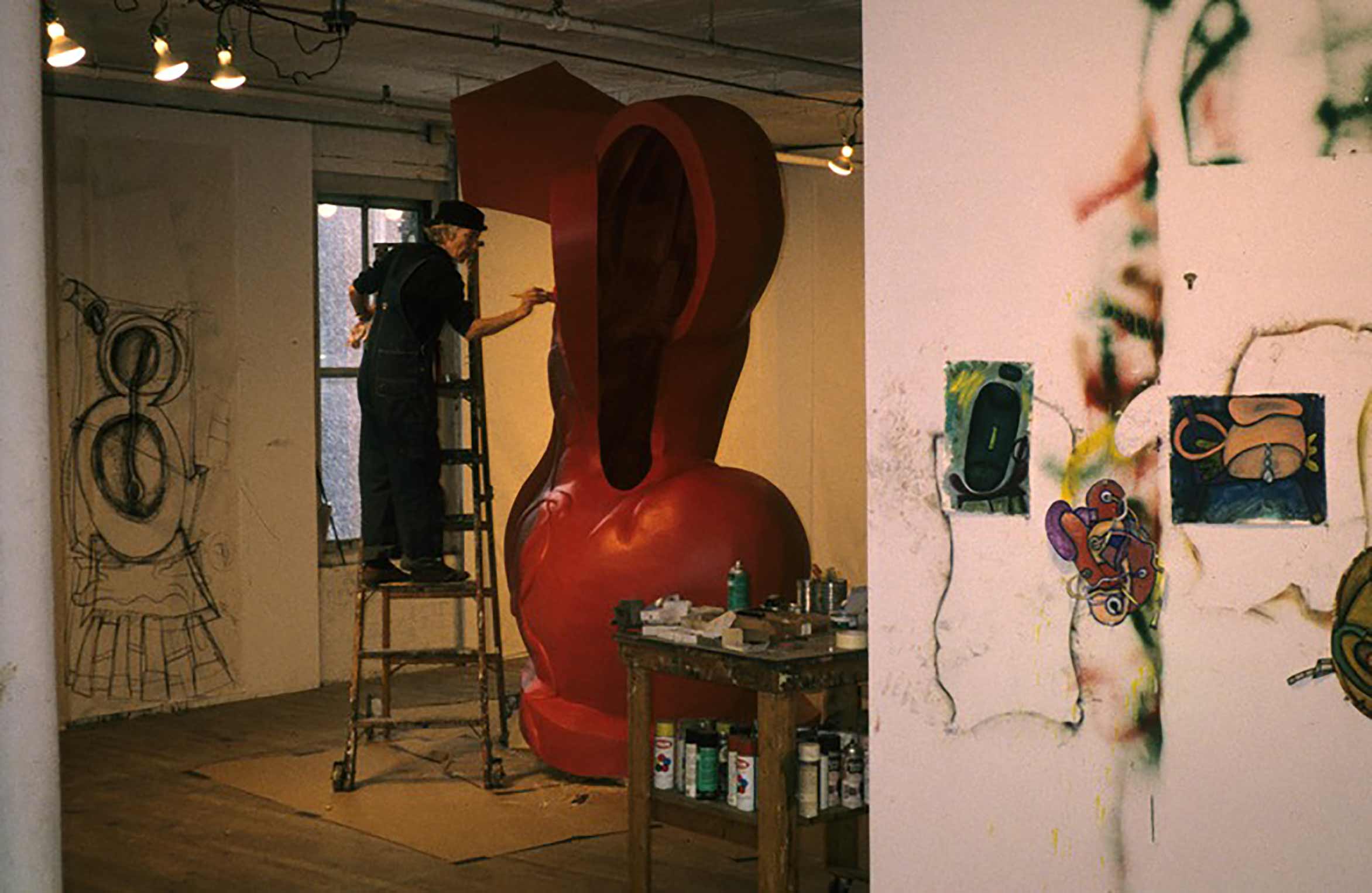 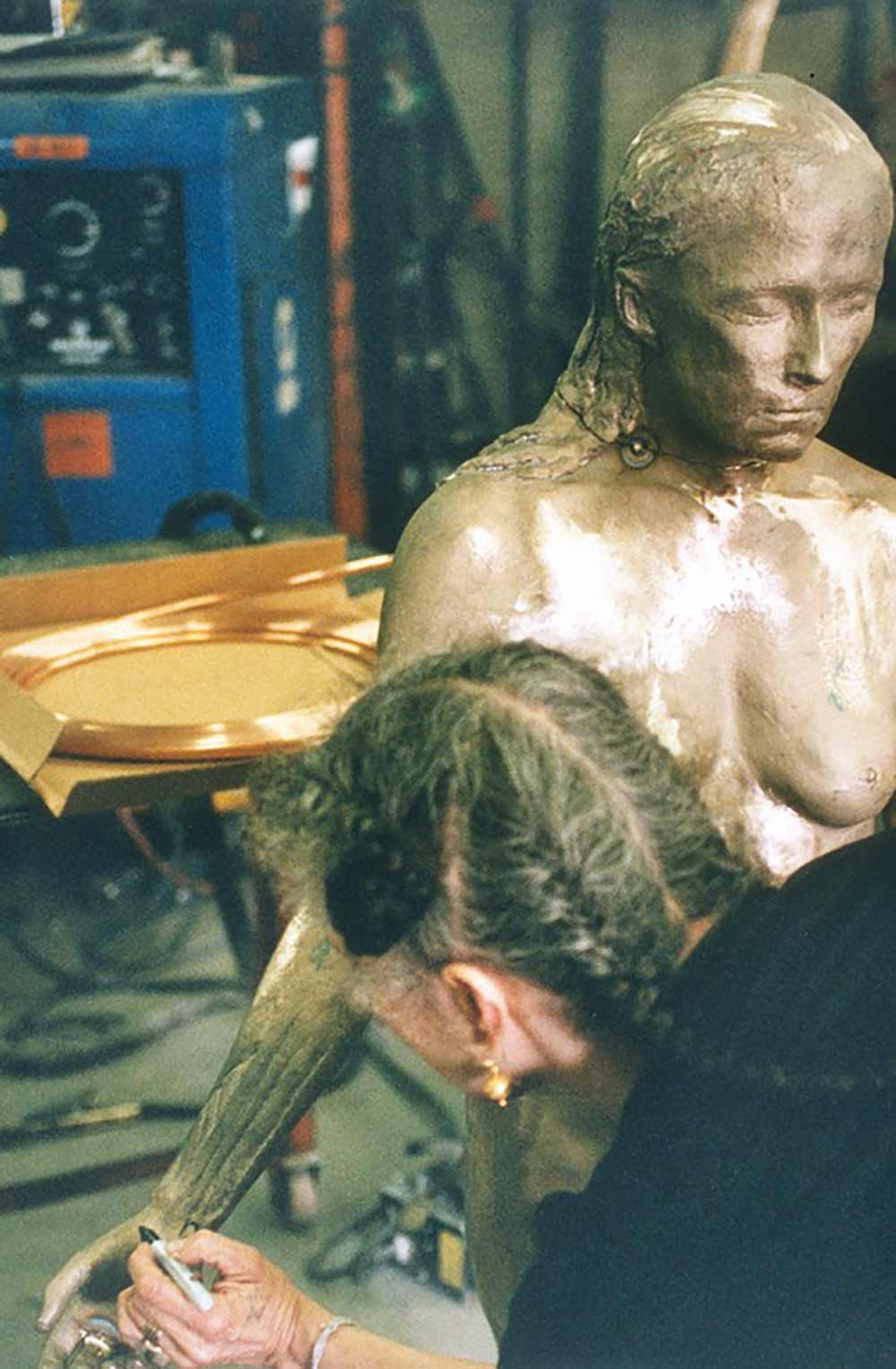 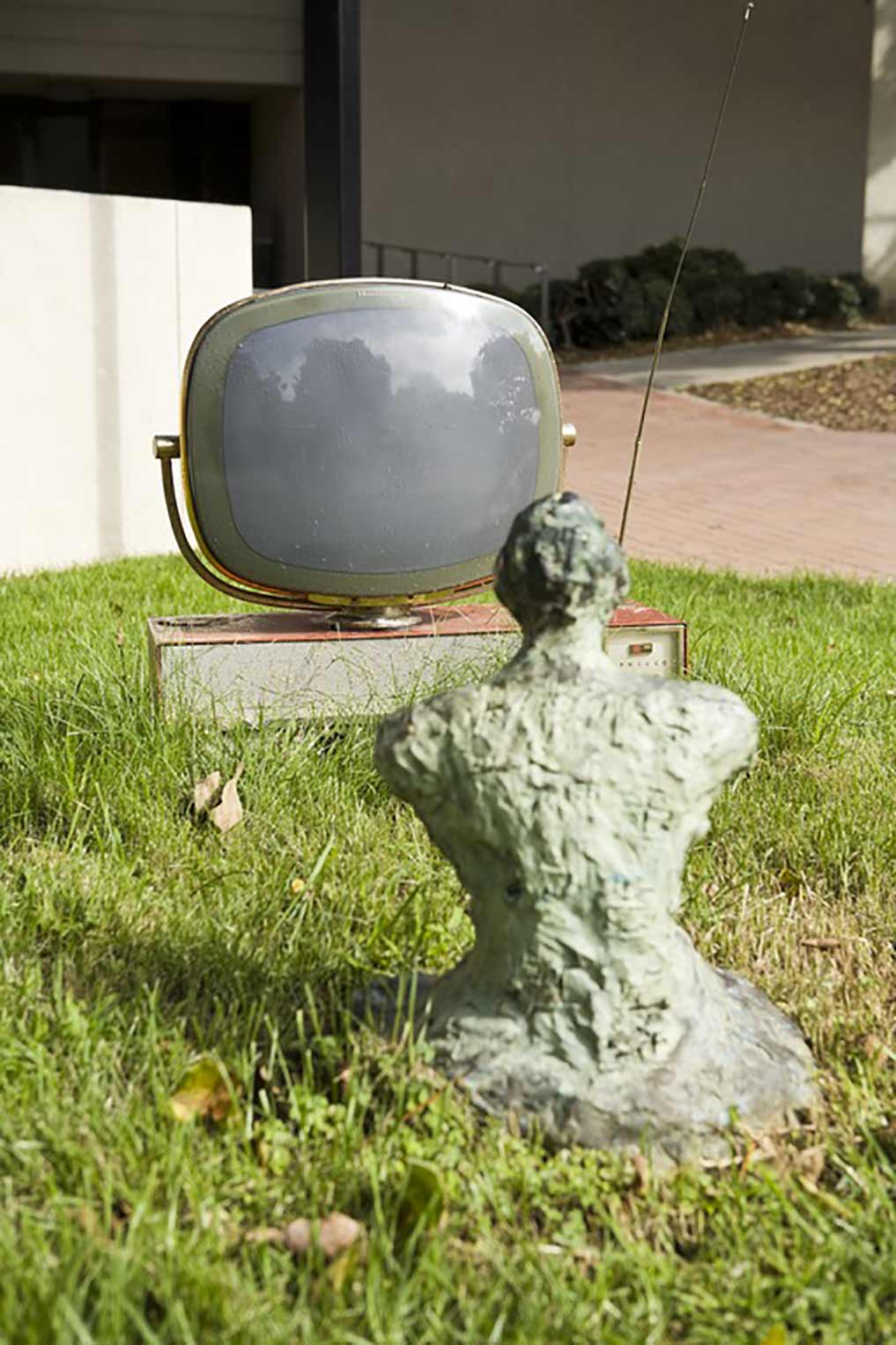 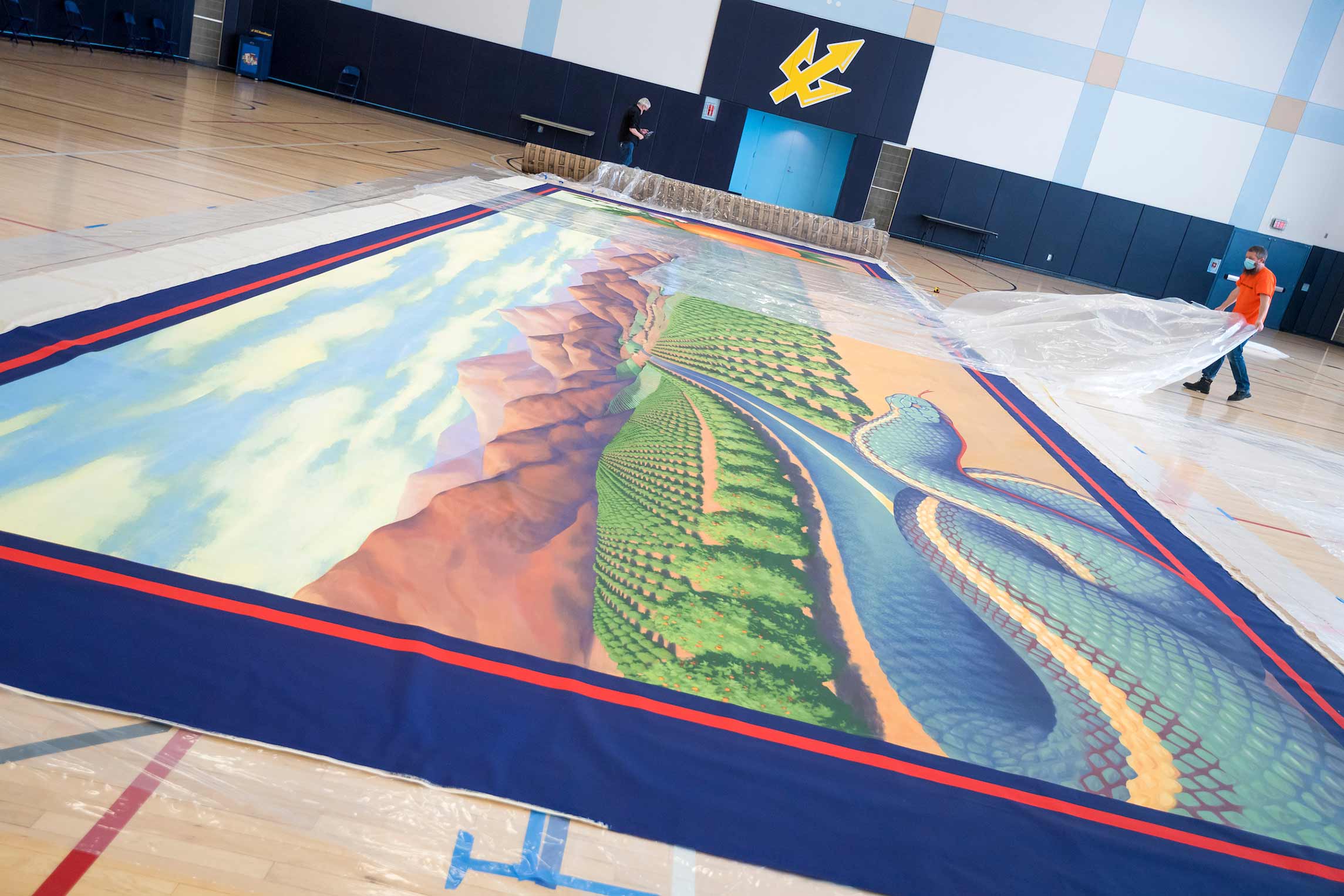 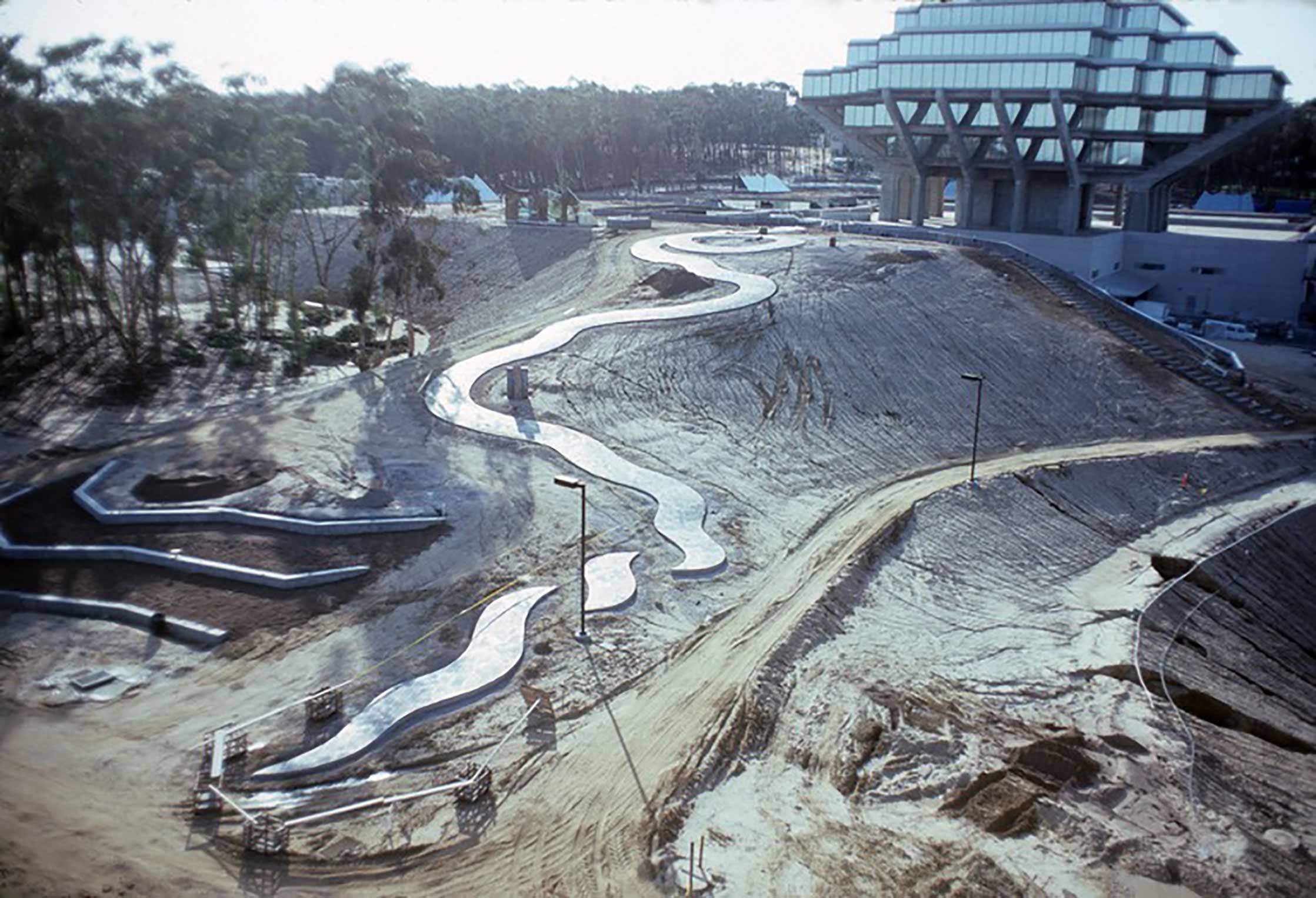 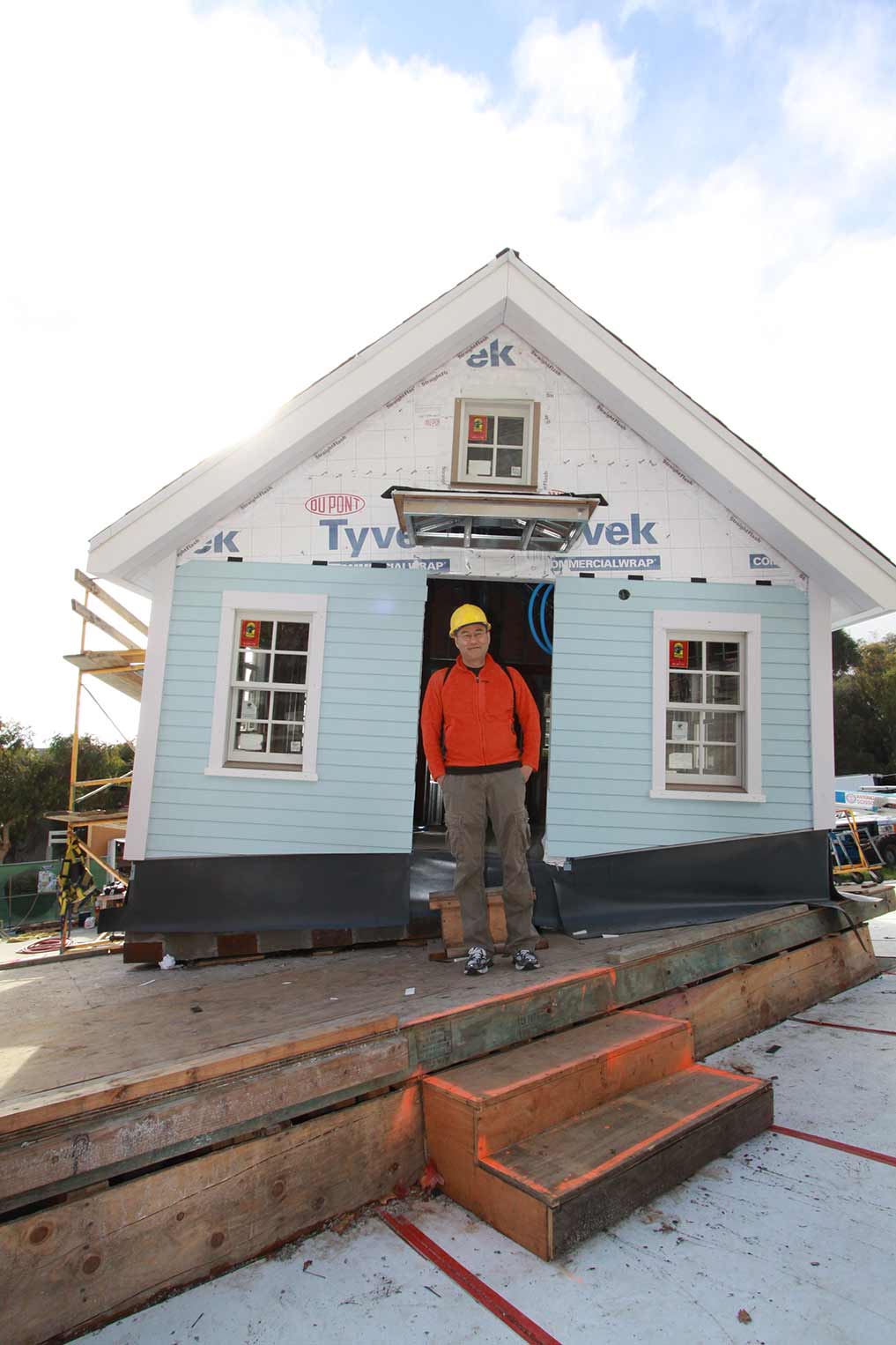 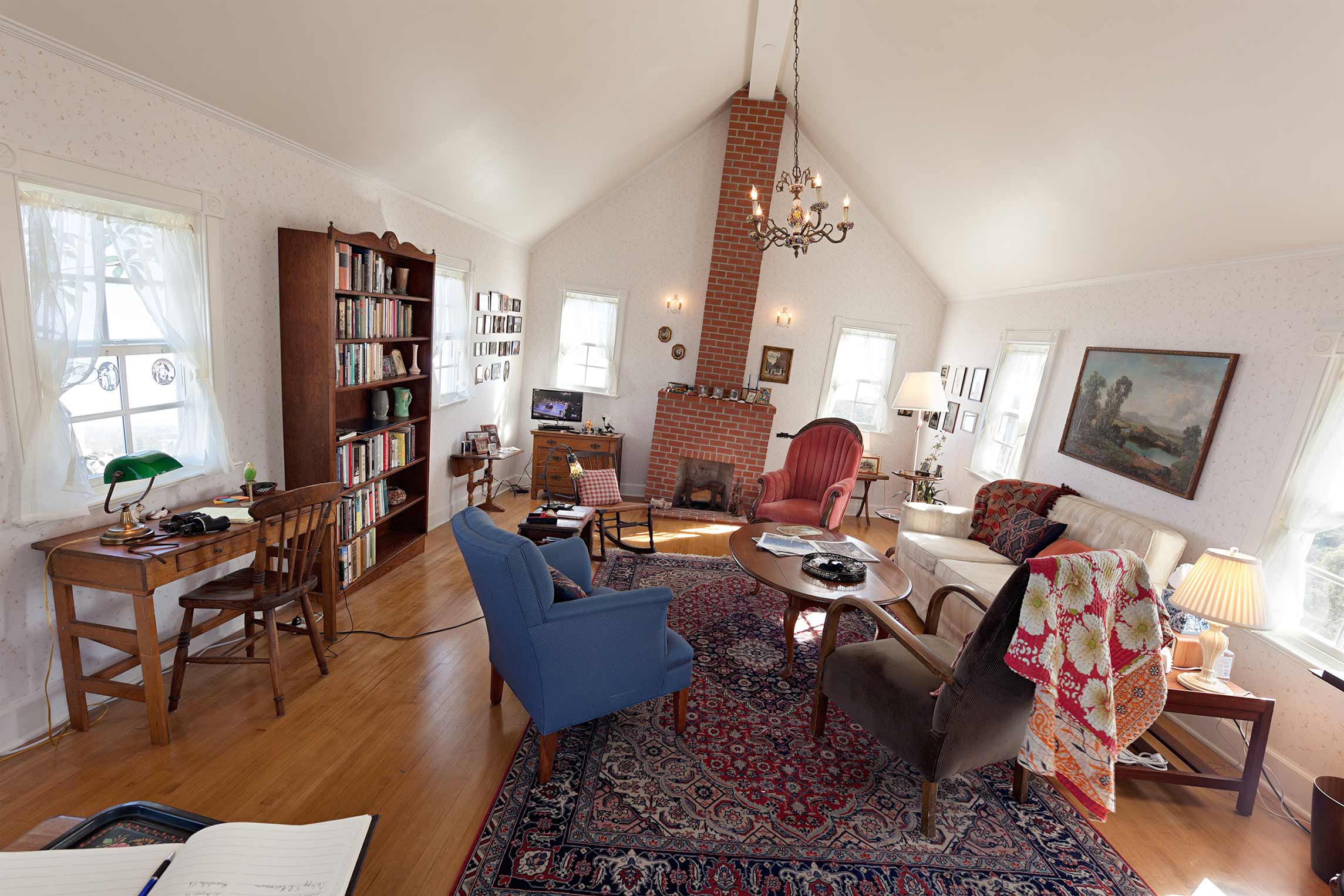 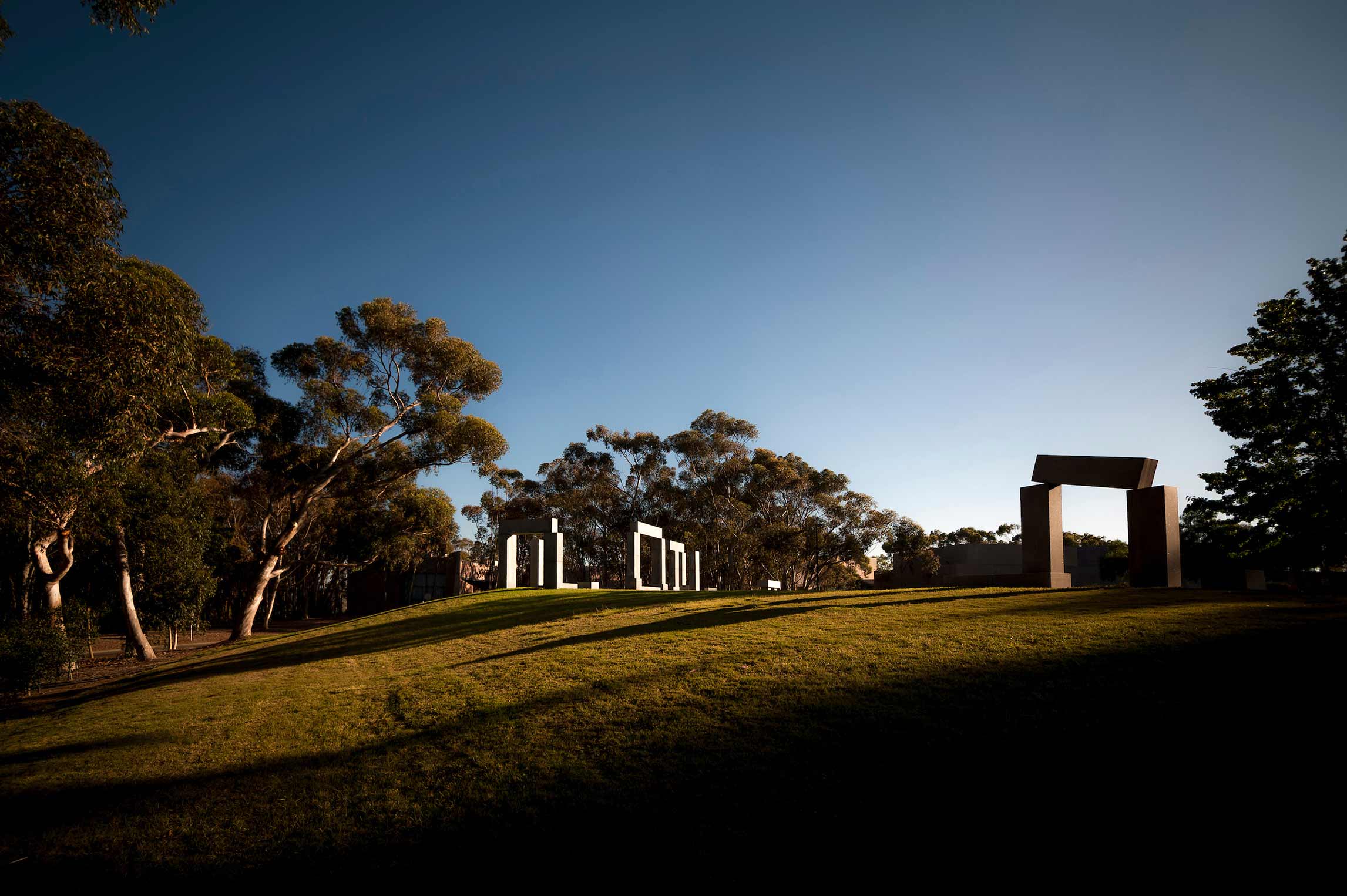 Known as the “silent tree,” this is one of three “Trees” that artist Terry Allen created in 1986. They are covered in sheet lead, a protective skin that is similar in color to the bark of live eucalyptus trees across the campus. Two other “talking” trees can be found in the adjacent grove; one plays music and the other poetry. Photo by Philipp Scholz Rittermann.

On Jan. 27, 1983, a celebration was held for the installation of the Stuart Collection’s first sculpture by artist Niki de Saint Phalle. The 14-foot-tall fiberglass “Sun God” was made in France, shipped to the Port of Long Beach and driven down the coast to land on our campus. Photo by Robert Glasheen, Stuart Collection Photographs, UC San Diego Library.

Tim Hawkinson’s “Bear” was created in 2005 after searching over a year for the perfect boulders to bring it to life. Eight granite stones were found locally and configured together to form a 23-foot bear weighing 180 tons. It greets visitors in the Jacobs School of Engineering on the way to Atkinson Hall. Photo courtesy of the Stuart Collection.

Tim Hawkinson’s “Bear” is an engineering feat that poses many questions. On one hand the sculpture is massive, permanent, and thoroughly engineered. At the same time, its form as a toy bear conveys feelings of softness and childhood play. Photo by Philipp Scholz Rittermann.

Bruce Nauman’s “Vices and Virtues” is meant to provoke new ways of thinking about moral standards, their relationship to each other and how they have changed. Letters are seven feet tall and each pair of words combines two colors with nearly a mile of neon tubing. The work was first proposed in 1983 and was completed in 1988. Photo by Philipp Scholz Rittermann.

You may have seen “Red Shoe” frolicking through the eucalyptus grove near the Theatre District. The 1996 sculpture by Elizabeth Murray sought to enliven a domestic object, and designed an abstract shoe that appears to be running through the forest. Stuart Collection Photographs, UC San Diego Library.

Artist Kiki Smith is pictured working on her sculpture, “Standing,” which was installed at the School of Medicine in 1998. The woman stands atop an 18-foot cast tree trunk, with musculature revealed and palms facing outward. Smith’s work focuses on both the strength and fragility of the human body. Photo by Art Foundry Inc., Stuart Collection Photographs, UC San Diego Library.

Nam June Paik, a Korean American artist, is considered to be the founder of video art. He was drawn to the Media Center at Marshall College, where part of his work (“Something Pacific”) includes three small Buddhas paired with a television—one each from the 1940s, 1950s and 1960s. It is a dramatic comment on how television has defined the American landscape. Photo by Philipp Scholz Rittermann.

John Baldessari’s “READ/WRITE/THINK/DREAM” is hard to miss as you walk through the entryway to Geisel Library. Installed in 2001, there are eight, 10-foot-high colorful glass door panels that mix new colors as they move and overlap. Photos of students standing on books are seen in the windows, while the walls just inside feature images of palm trees and pens, instruments of learning and a tie to the school’s Southern California location. Photo by Erik Jepsen/University Communications

Alexis Smith’s mural, “Same Old Paradise,” had been curled up in a crate for 30 years, waiting for a permanent home. It is now proudly displayed—as the first painting in the Stuart Collection—in the auditorium atrium of North Torrey Pines Living and Learning Neighborhood. Photo by Erik Jepsen/University Communications.

The “Snake Path” that leads to Geisel Library represents a metaphorical road to revelation while also referencing the tempting serpent of knowledge from the Garden of Eden. The work by Alexis Smith was finished in 1992, and coincided with an expansion of the Library. Photo by Mathieu Gregoire, Stuart Collection Photographs, UC San Diego Library.

Artist Do Ho Suh stands in the doorway of his “Fallen Star,” installed on top of the Jacobs School of Engineering Building I in 2012. His work explores the notions of home, cultural displacement, one’s perception of space and how one builds a memory of it. Photo courtesy of the Stuart Collection.

“Fallen Star” is fully furnished, featuring family photographs contributed by campus staff and friends, lamps and chairs, paintings and books--all to reflect a lived-in home. The fireplace emits puffs of smoke and the lights and television turn on and off with a timer. Tours are currently on hiatus but visit stuartcollection.ucsd.edu for updates. Photo by Philipp Scholz Rittermann.

Stuart Collection Director Mary Beebe and Operations Manager Mathieu Gregoire have been with the collection since its inception and will both retire this fall from their roles. Photo by Michael Foster/University Communications.

At 15 by 18 feet, “Fallen Star” is a three-quarter-sized version of a small house in Providence, Rhode Island. Considered an engineering feat, the entire sculpture consists of the house, cantilevered at an angle from the corner of the building, integrated to a structural concrete slab, with a roof garden on the existing building. Photo by Erik Jepsen/University Communications.

“Two Running Violet V Forms” was designed by artist Robert Irwin and installed in 1983. The “fences” are blue-volet and act as a screen to reflect the changes in light throughout the day and year, providing an ever-changing perceptual experience. Photo by Erik Jepsen/University Communications.

Artist Richard Fleischner’s “La Jolla Project” was completed in 1984 as the third work in the Stuart Collection and is located on the Revelle College lawn. Seventy-one blocks of pink and gray granite are arranged in configurations that refer to architectural vocabulary: posts, lintels, columns, arches, windows, doorways, and thresholds. Photo by Erik Jepsen/University Communications.