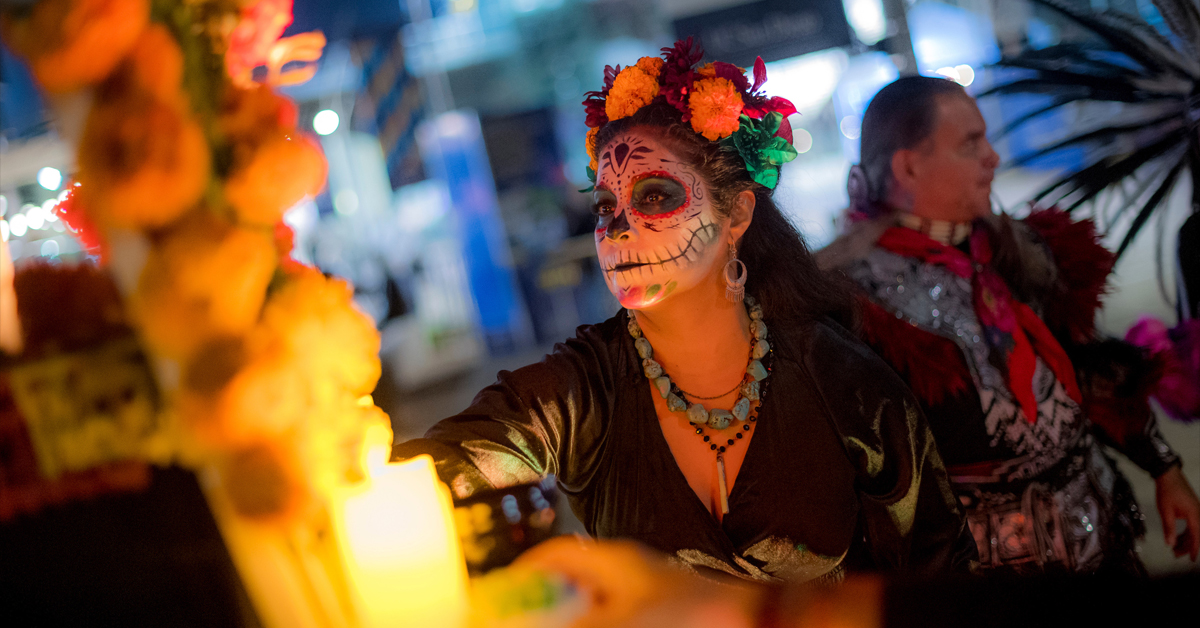 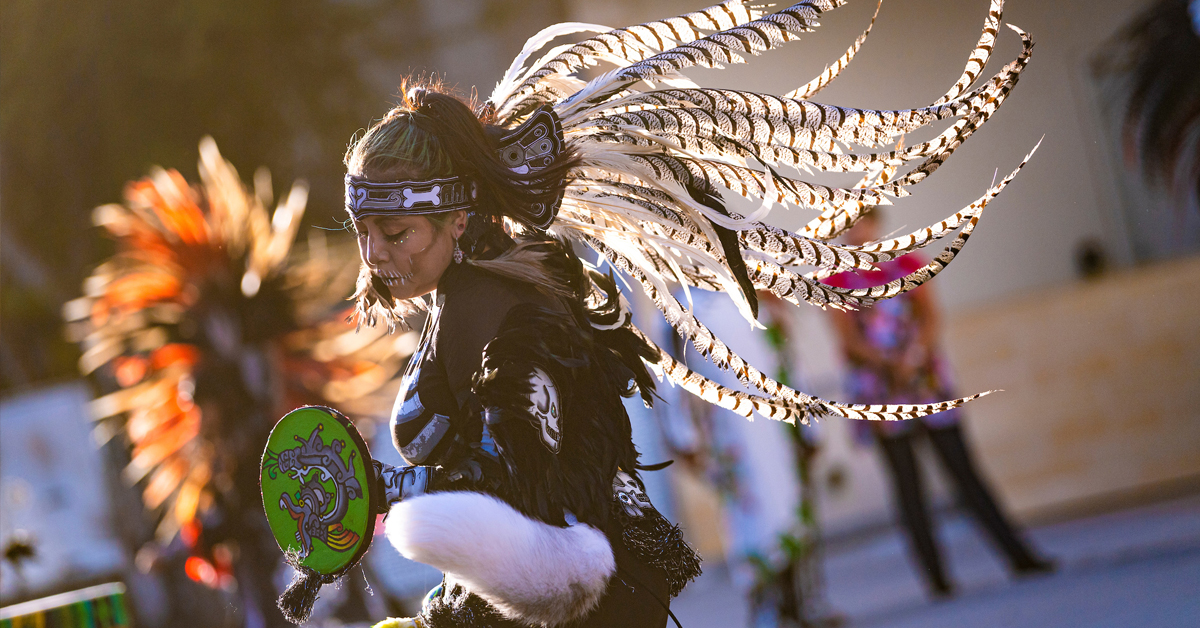 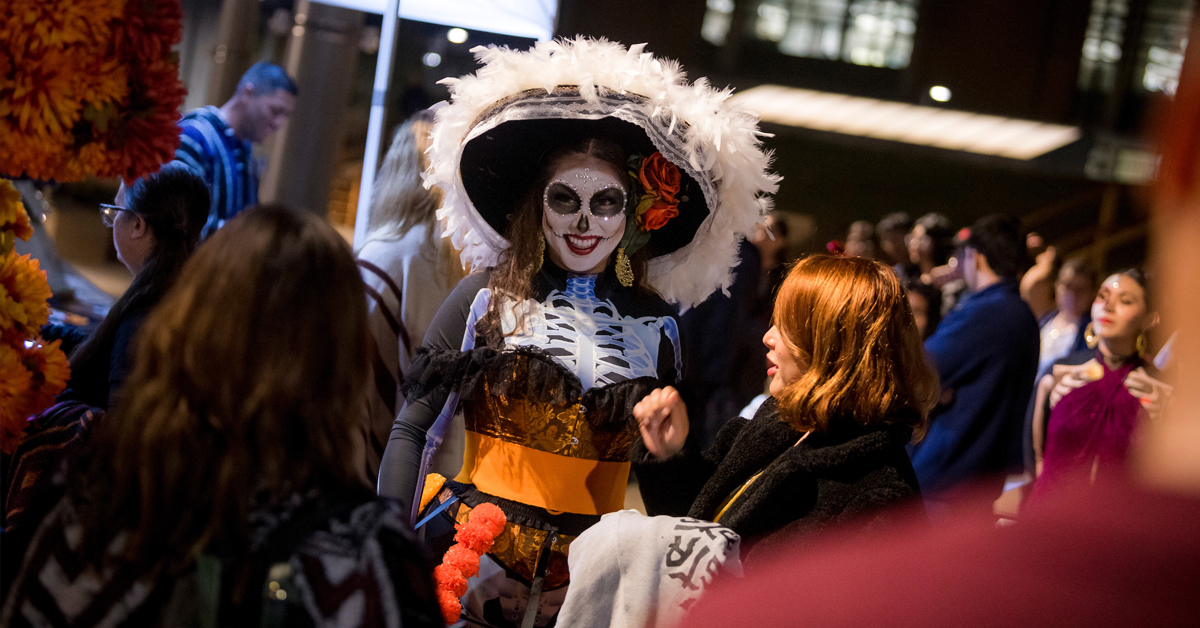 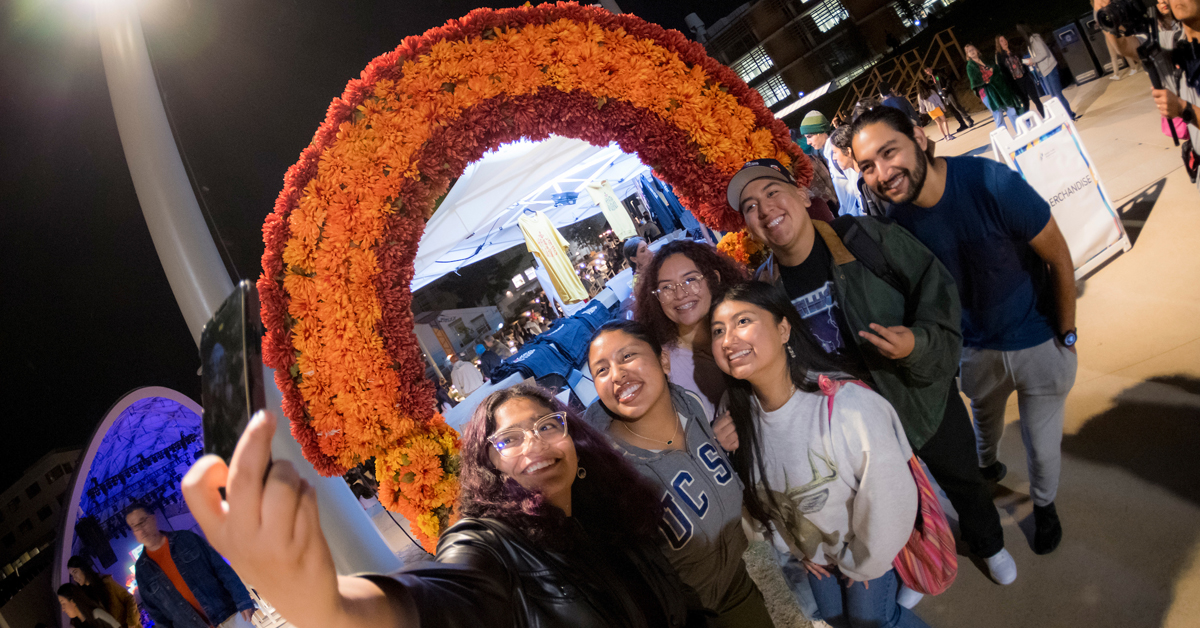 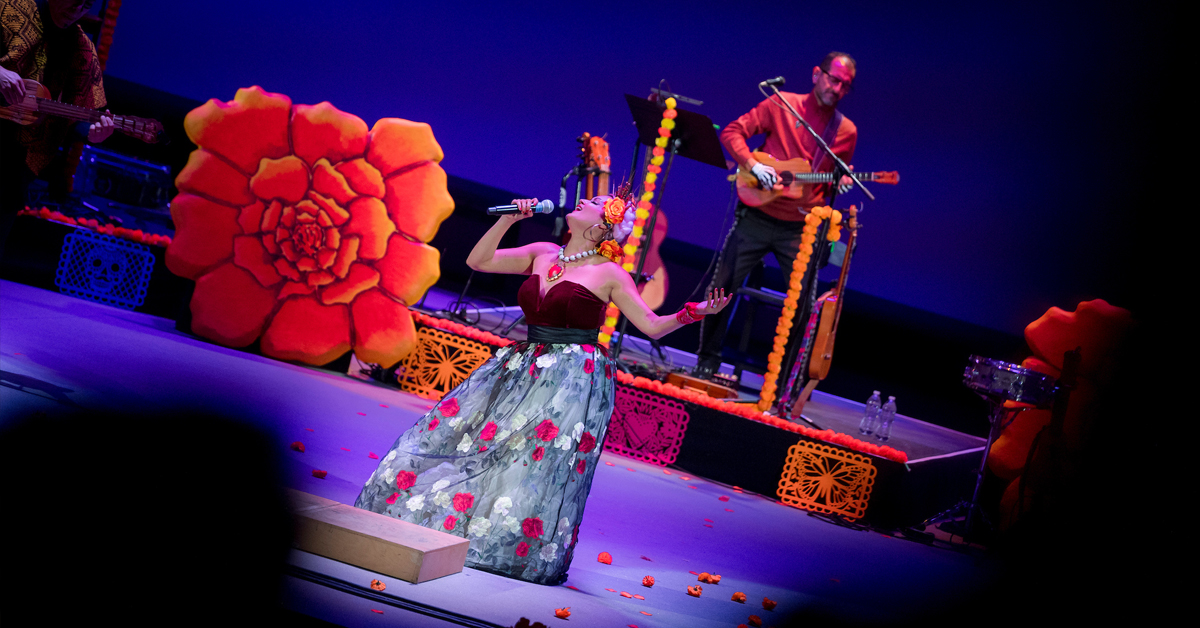 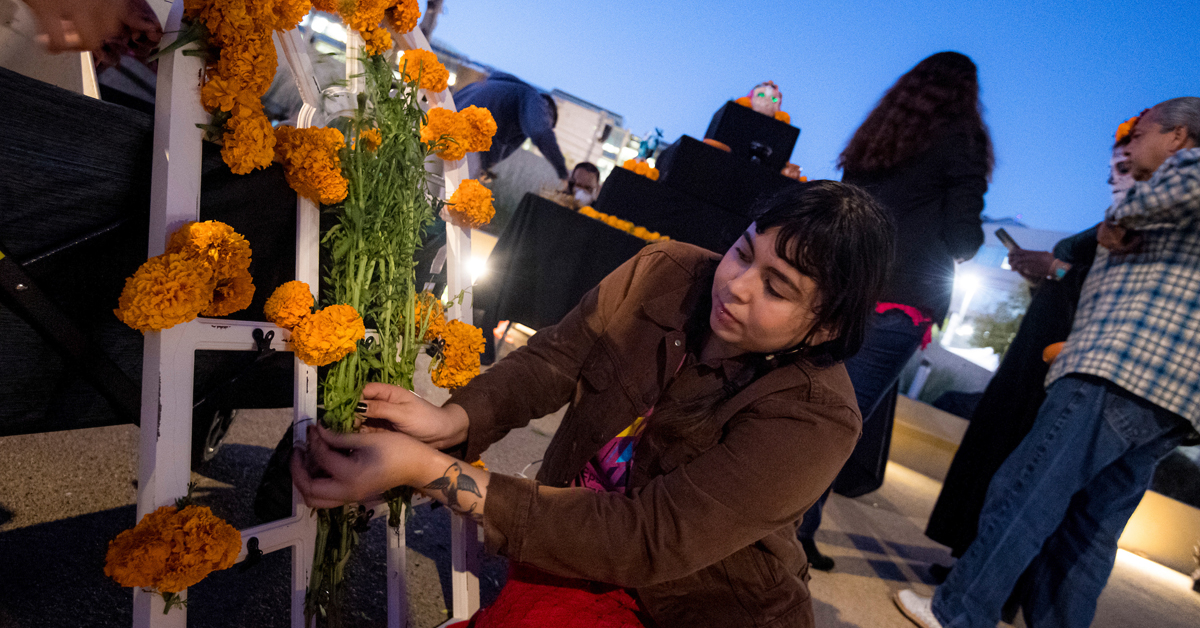 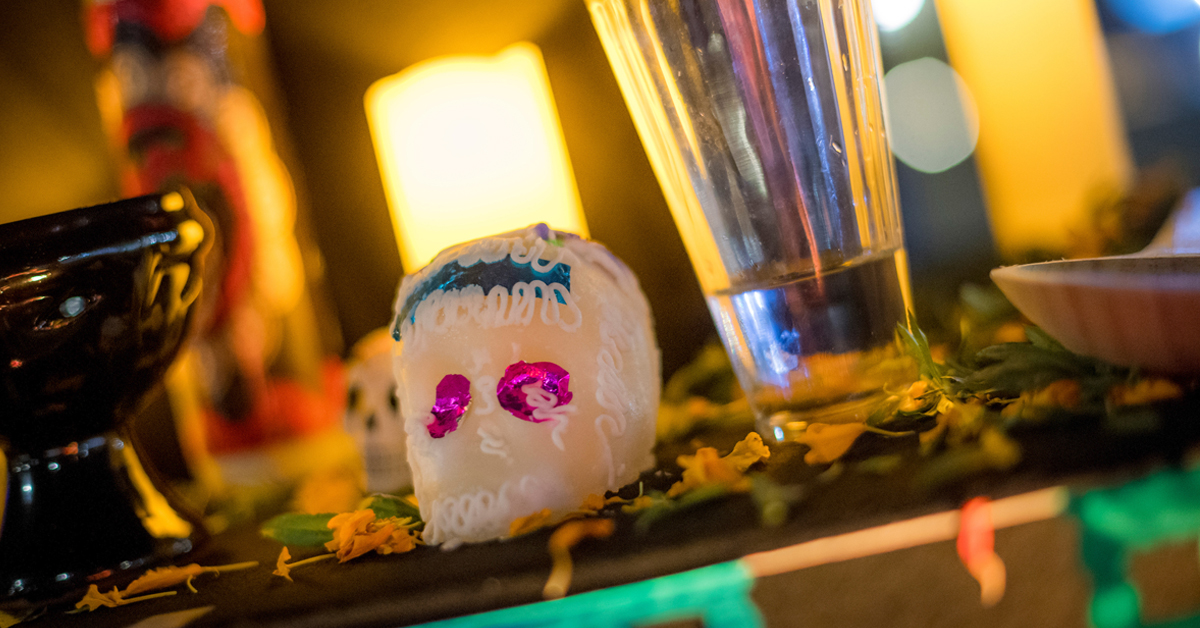 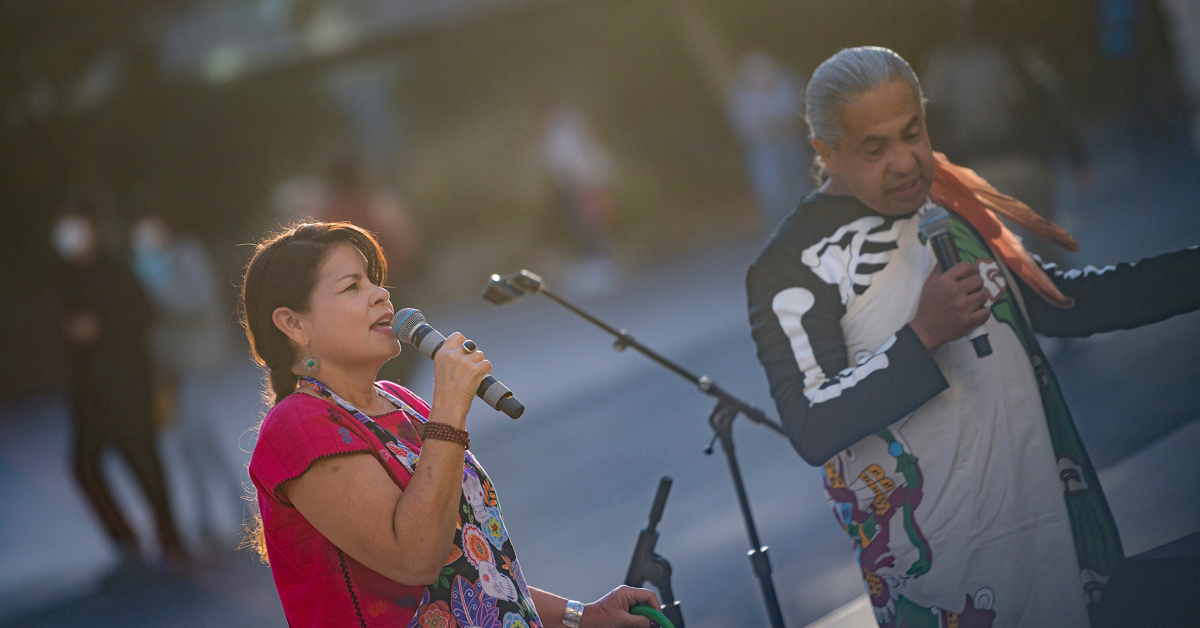 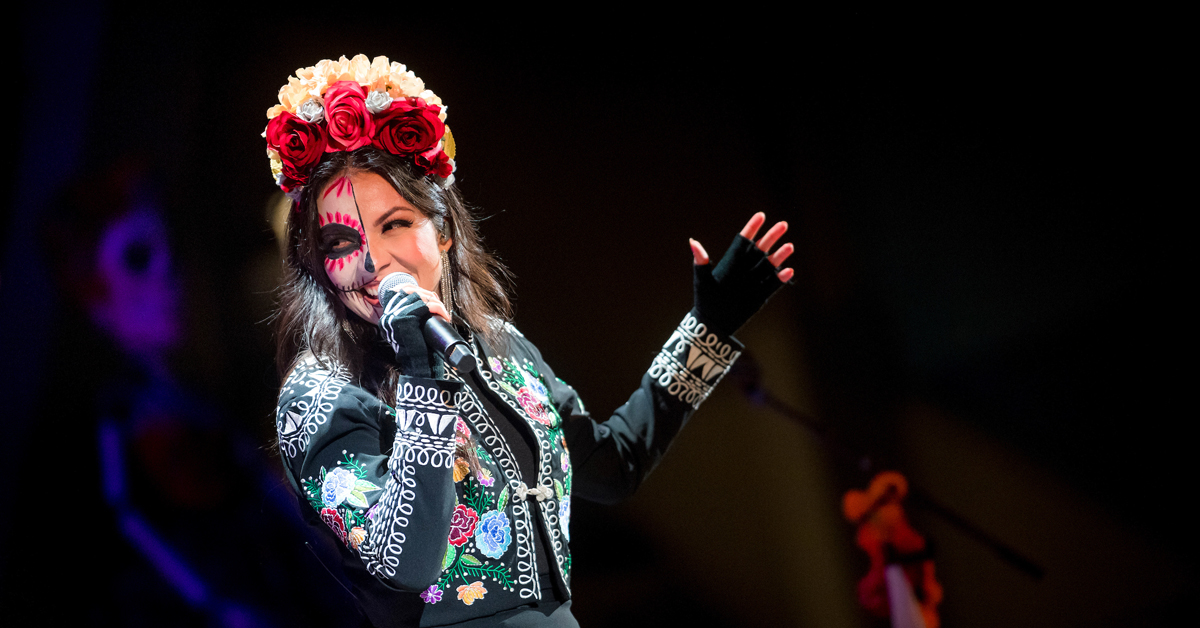 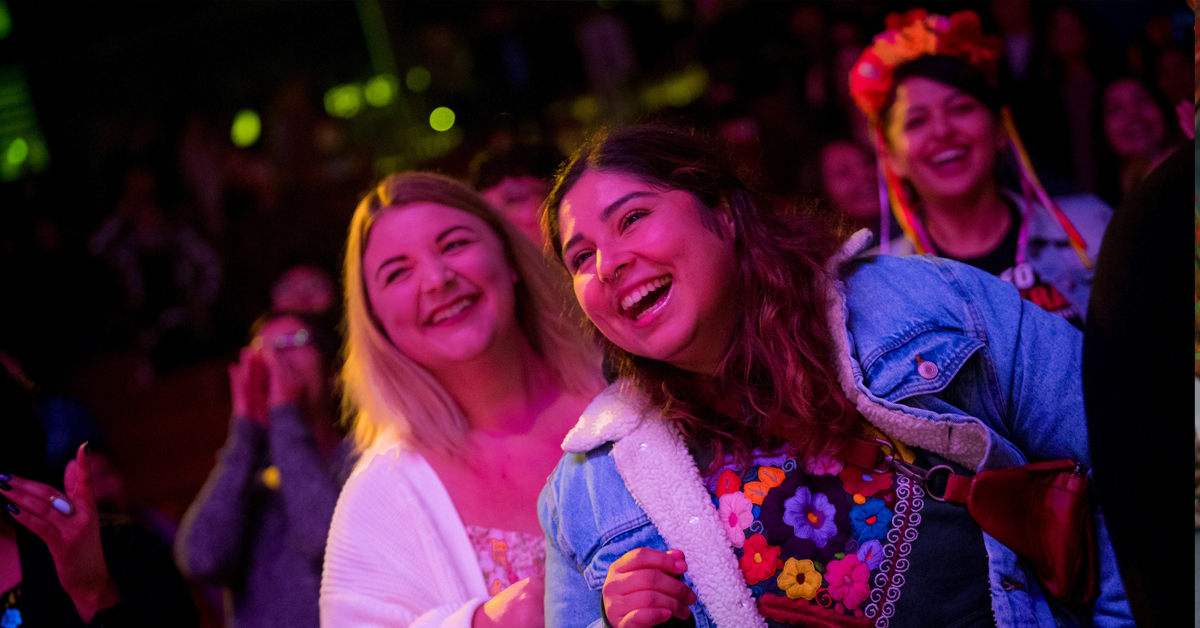 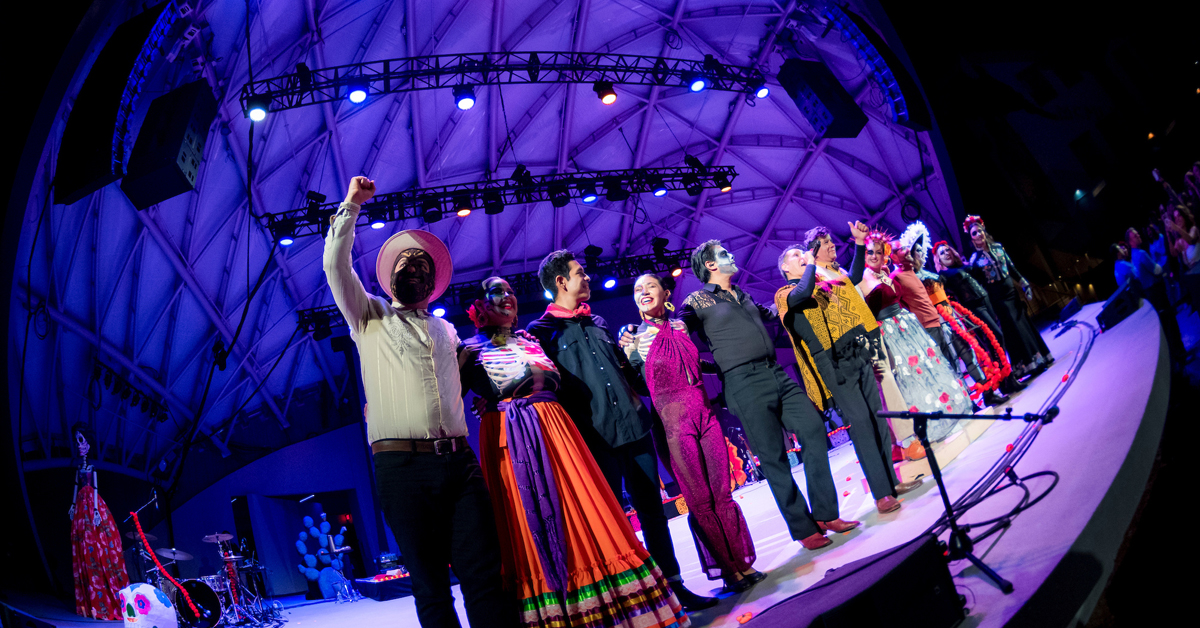 On Oct. 27, UC San Diego students, staff, faculty and community members were invited to join in a storytelling and musical performance event to learn about the Dia de los Muertos (Day of the Dead) tradition. Photos by Erik Jepsen/University Communications.

The educational event included an Aztec dance performance. Dia de los Muertos, or Day of the Dead, is as Indigenous tradition that originated over 15,000 years ago among Aztec people in Mexico as a practice to honor deceased loved ones.

La Catrina makeup is a powerful symbol of the tradition and culture of Dia de Los Muertos, a way to honor life and death.

A large floral arch marked the entrance to the event, held at the university's new Epstein Family Amphitheater.

An important goal for the members of Las Cafeteras is to inspire others to share their story by modeling authentic expression themselves on stage.

Students were invited to join in making an altar, which often includes marigold flowers (known in Mexico as cempaxochitl).

Altars can include photos or personal items from the deceased person, foods that they enjoyed, water or other drinks to quench their thirst as they make their journey, candles and incense as well as grains such as amaranth to give thanks to the four elements.

Toward the end of the performance, Las Cafeteras invited the audience to join them at the stage, which prompted a mass dance party, smiling and clapping.

Las Cafeteras started off as a group of friends at a community center called the East Side Cafe learning the traditional sounds of son jarocho music of Veracruz, Mexico.

On Oct. 27, UC San Diego students, staff, faculty and community members were invited to join in a storytelling and musical performance event to learn about the Dia de los Muertos (Day of the Dead) tradition. The event began with an educational skit by Teatro Izcalli, a San Diego-based Chicana/o comedy group led by alumnus Macedonio Arteaga Jr. and his wife Alicia Chavez-Arteaga, which included Aztec dancing. The evening concluded with a spectacular musical performance by East Los Angeles band Las Cafeteras, with special guest Lupita Infante. Their two-part show encompassed the grief of death and the celebration of afterlife.