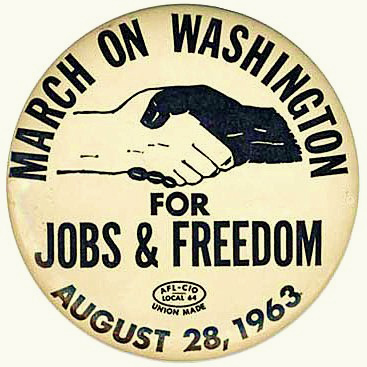 On February 22, as part of its Black History Month activities, the UC San Diego Library will hold a panel discussion from 12 noon to 1:30 p.m. that will include City of San Diego Mayor Bob Filner, a Freedom Rider, and other activists from the Civil Rights Movement of the 1960s.

“On Freedom’s Front Line:  Veterans of the Civil Rights Movement Speak Out,” will take place in the Seuss Room in Geisel Library on the UC San Diego campus. The event will include refreshments and is free and open to the public. However, seating is limited so advance registration is requested:  RSVP:  http://bit.ly/PoliticsOfThePodium

The panel discussion, which will be moderated by UC San Diego History Professor Daniel Widener, will include the following panelists:

James Garrett, an early activist in the civil rights struggles of the 1960s, directed the Student Non-Violent Coordinating Committee (SNCC) offices in Watts and Hollywood (1965).  As a student, he founded the first Black Student Union at San Francisco State University. A retired scholar and legal consultant who holds JD and PhD degrees, he continues to work in human rights organizing and advocacy. 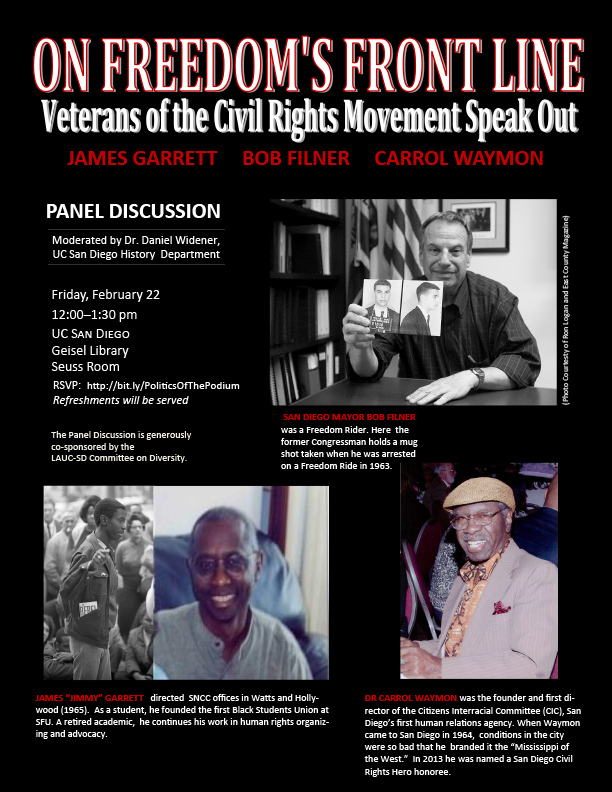 Bob Filner, City of San Diego Mayor, was only an 18-year old student at Cornell University when he joined the Freedom Rides in Nashville. In 1963, he was arrested in Mississippi on a Freedom Ride, and spent several weeks in the Mississippi State Penitentiary. After receiving his Ph.D. from Cornell in 1969, Filner moved to San Diego and embarked on a 20-year long teaching career at San Diego State University. Always the activist, he warned his students that their “grand” thoughts were futile unless they put them into action to help people and improve the world. Filner went on to serve in a variety of elected positions, including San Diego City Council, the U.S. Congress, and now Mayor of San Diego.

Dr. Carrol Waymon was the founder and first director of the Citizens Interracial Committee (CIC), San Diego’s first human relations agency. When Waymon came to San Diego in 1964, conditions in the city were so intolerant that he branded it the “Mississippi of the West.” Among his committee’s achievements: the removal of restricted covenants so that African Americans and other people of color could live anywhere they wanted in San Diego; and writing the first Equal Opportunity ordinances for the city and county, opening up opportunities for employment. In 2013, Waymon was named a San Diego Civil Rights Hero honoree.

The panel discussion coincides with the exhibit “Also There: Unsung Voices from the Crossroads of Freedom & Equality,” which is on display in the West Wing of Geisel Library through April 15. The exhibit celebrates the March on Washington and the stories of many of the organizers and participants in the Civil Rights Movement, many of whom aren’t always recognized in textbooks and in the dominant narratives about those turbulent times.

About the UC San Diego Library

Ranked among the nation’s top public academic research libraries, the UC San Diego Library plays an integral role in advancing and supporting the university’s research, teaching, and public service missions. As the intellectual heart of the UC San Diego campus, the university library provides access to more than 7 million digital and print volumes, journals, and multimedia materials to meet the knowledge and information needs of faculty, students, and members of the public.  Each day, the Library’s vast resources are accessed nearly 90,000 times through the Library’s main Web site. For more information: http://libraries.ucsd.edu/