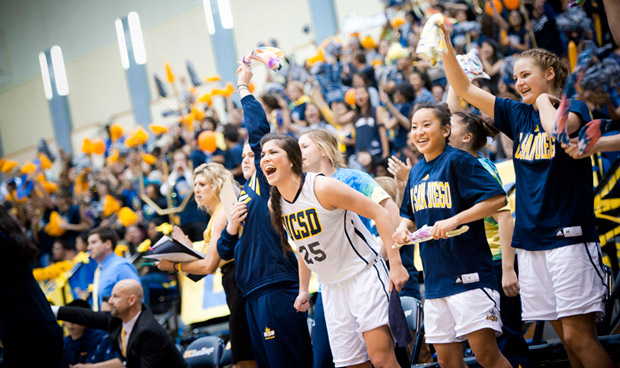 Emily Osga scored a game-high 20 points and Daisy Feder and Lauren Freidenberg finished with 17 apiece as the Tritons kept their impressive streak going with a gutsy performance in one of the conference's toughest arenas to play in.

UCSD saw its 14-point second half lead cut down to three with three minutes to play, but answered with a 7-2 run to put the game away and claim its third CCAA regular season crown in the last four seasons. The Tritons improve to 25-0 overall and 19-0 in the CCAA, sweeping the season series with the rival Otters.

UCSD, which had already locked up the top seed in the conference tournament that begins later this month, has now won 28 of its last 29 CCAA games dating back to the end of last season.

Cal State Monterey Bay falls to 17-6 overall and 14-5 in conference play with the loss.

"It's always tough to play on the road, but tonight was a really good test for us," head coach Charity Elliott said. "The place was packed, the crowd was crazy and Monterey Bay played extremely well. We talked about being mentally tough before the game and I think we were tonight. We made a few key plays down the stretch and that was the difference." 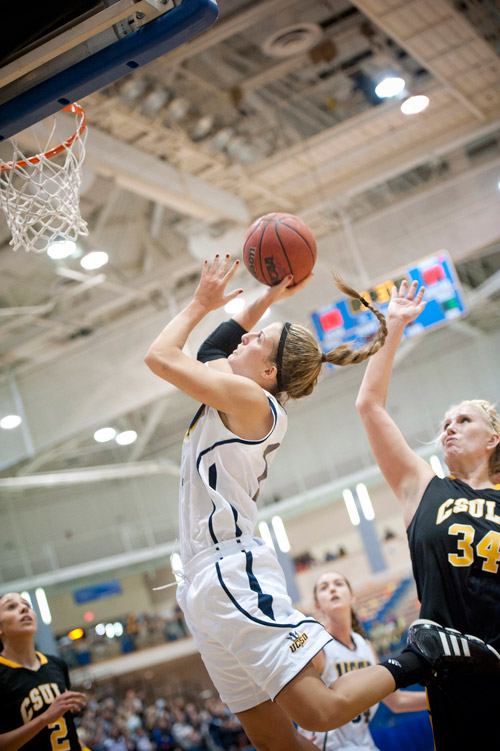 Osga was outstanding for the Tritons, finishing 7-of-12 from the field and a perfect 3-for-3 from the three-point line, while also tallying seven rebounds and five assists. She scored 13 points during the second half, including a huge bucket that put UCSD up by five with under a minute to play.

Feder hit 3-of-7 from downtown and finished 5-for-16 overall, reaching double figures for the 16th consecutive game. While Osga was leading the charge in the second half, Feder got things going early as she scored 12 first half points to stake the Tritons to a nine-point first half advantage.

Freidenberg hit eight of her 13 shots from the field and grabbed seven boards, while Chelsea Carlisle finished with 12 points, four rebounds, five assists and three steals.

"Tonight was just another example of the balance this team has," Elliott continued. "We don't have to rely on any one player to score to win. We have several individuals that can step up and get the job done and to see such a balanced effort in tough environment on the road was really impressive."

UCSD led 63-51 with less than 10 minutes remaining in the second half, but CSUMB answered with a huge 11-2 run over the next seven minutes to pull within 65-62 with three minutes to play. The Tritons missed five straight shots at one point during the stretch, while also turning the ball over three times.

After Erika Ward brought the home team to within three, Osga finally broke UCSD's cold spell two minutes later, scoring out of a timeout to put UCSD on top 67-62 with 51 seconds left. The Tritons got a stop on the Otters' next trip and Carlisle followed with two free throws to push the lead to seven with 35 seconds remaining.

Brandi Stephens came up dry on a three-point attempt the next time down for Monterey Bay and UCSD sank three more free throws in the final 17 seconds to ice the victory. The Tritons held the Otters to just four points over the final 4:51 as the home team's upset bid fell short.

Stefanie Corgel led the Otters with 17 points on 7-of-17 shooting, while Stephens finished with 13.

The Tritons will now face Cal State East Bay on Saturday evening in Hayward. The Pioneers are coming off a 58-52 win over Cal State San Bernardino on Friday.