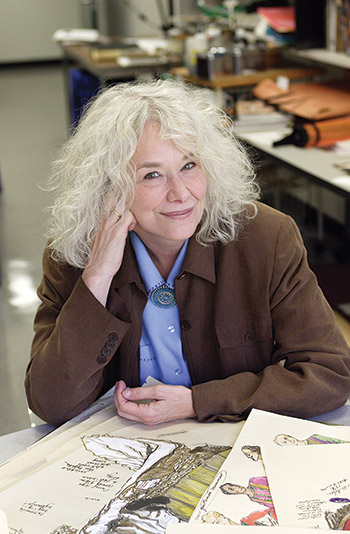 The League of Professional Theatre Women is honoring the work of Judith Dolan, a Tony Award-winning UC San Diego professor of theatre and dance and head of design, with the Ruth Morley Design Award.

Gregory Boyd, artistic director of the Alley Theatre, will be presenting the award in a ceremony March 10 at the Signature Theatre in New York City. This marks the first time the award is being presented to a “non-New Yorker.”

At Houston’s Alley Theatre, where she is currently associate artist, her work includes “You Can’t Take It with You,” “The Seafarer,” “Harvey,” “The Lieutenant of Inishmore,” “Arsenic and Old Lace,” “The Glass Menagerie,” “A Midsummer Night’s Dream,” “Macbeth,” “As You Like It” and Theresa Rebeck’s new play “Fool.”

Dolan has collaborated with Harold Prince on many productions on and off Broadway including “Candide” (for which she won a Tony), “The Petrified Prince” (Lucille Lortelle Award) and “LoveMusik,” with music by Kurt Weill, as well as “Parade” and “Hollywood Arms” (by Carol Burnett and Carrie Hamilton).

Other credits include “Lewis and Clark Reach the Euphrates” and “Travesties,” both directed by Gregory Boyd. She earned an MFA in costume design and a Ph.D. in directing and design from Stanford University.

Read more about the award and the event.