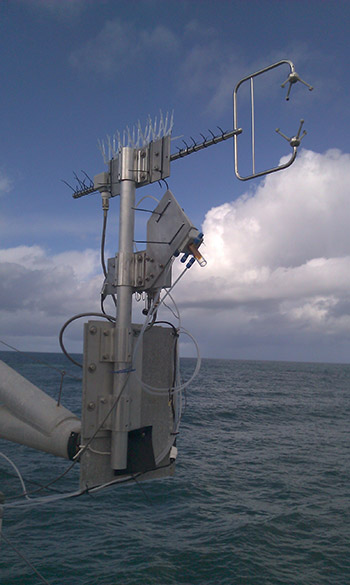 Instruments to sample the air and measure its turbulence deployed off the pier at Scripps Institution of Oceanography. Image credit, Michelle Kim.

The surface of the sea takes up nitrogen oxides that build up in polluted air at night, new measurements on the coast of southern California have shown. The ocean removes about 15 percent of these chemicals overnight along the coast, a team of atmospheric chemists reports in the early online edition of the Proceedings of the National Academy of Sciences the week of March 3.

Nitrogen oxides, formed by the burning of fossil fuels, generate photochemical smog. Atmospheric chemists would like to account for the fates of these molecules in a kind of budget that indentifies their sources and sinks – ways in which they are removed from the air.

“One often neglected path is reaction at the surface of the sea,” said Tim Bertram, an assistant professor of chemistry at the University of California, San Diego, who led the research. “The sea has a salty, rich, organic surface with the potential for a variety of chemical reactions.”

To track the cycle of nitrogen in the atmosphere, they studied dinitrogen pentoxide, a molecule that results from the oxidation of nitrogen oxides. It can react with chloride from sea salt, for example, to form nitryl chloride. When sunlight hits nitryl chloride the next morning, it regenerates nitrogen oxides and frees a chlorine radical that attacks other molecules in reactions that can lead to the formation of ozone.

Michelle Kim, a graduate student at UC San Diego’s Scripps Institution of Oceanography working with Bertram, deployed instruments at the end of the institution’s pier in La Jolla, Calif., to measure the flux of these molecules.

On the night of February 20, 2013, the usual offshore breeze reversed to provide the pure ocean fetch needed to measure the exchange between air and sea. The airmass she measured also contained emissions from Los Angeles that had blown out to sea. That gave Kim an opportunity to measure the fates of dinitrogen pentoxide and its product, nitryl chloride, over the course of a night.

By simultaneously measuring concentrations of both molecules and turbulence in the air above the sea surface, Kim saw a net movement of dinitrogen pentoxide into the ocean, but was surprised to see no net exit of nitryl chloride into the air.

“We knew from previous work that nitrogen oxides are lost to various surfaces – sea spray and other aerosols, even snowpack,” she said. “This study shows – for the first time - that the ocean is a terminal sink for nocturnal nitrogen oxides, and not a source for nitryl chloride under these sampling conditions.”

These observations haven’t been made before in large part because the measurements use a micrometeorological technique to answer an atmospheric chemistry question. Co-author Delphine Farmer at Colorado State University, a leader in these methods, helped to guide to the flux measurements.

Betram says it’s part of his group’s mission, to “embrace the complexity to study real systems in their native states and the coupling of the natural world with our influence.”