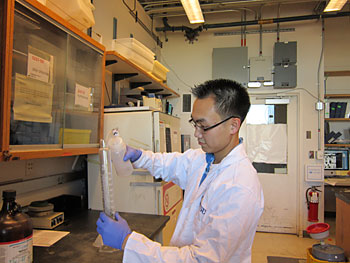 After six years in a North Vietnamese “reeducation” camp, Thai Hoang Do’s father escaped to Thailand with five children and his wife in tow. It was in a refugee camp in Thailand that Thai Do—the youngest of six children—was born to the Do family. Seven years later, the family moved to the United States, settling in San Diego’s City Heights neighborhood.

Today, Do is a senior at UC San Diego, with plans to become the first in his family to earn a post-graduate degree. The biochemistry major is currently visiting medical schools around the country—including those at Harvard, New York University and Johns Hopkins—with the goal of someday becoming a physician to help those in need.

Do was recently honored with a Division of Physical Sciences Dean’s Award for Excellence, recognizing his outstanding academic work and undergraduate research while attending UC San Diego. The Dean’s Awards were established in 2004 to recognize demonstrated academic performance and a commitment to go on to pursue graduate studies. This year, a total of 20 students from the departments comprising the Division of Physical Sciences, including math, physics, chemistry and biochemistry as well as the interdisciplinary environmental systems major, received awards of $1,000 each. The awards are made possible with annual gifts from alumni, parents and families, and friends of the Division of Physical Sciences at UC San Diego.

“Our alumni tell us their undergraduate research experience changed their lives,” said Mark Thiemens, dean of the Division of Physical Sciences. “Almost all undergraduate students in the Division of Physical Sciences gain some research experience—it is a trademark of our programs. These awards are the way we recognize that excellence. It’s the best event we hold.” 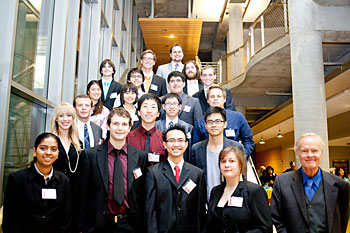 Do received his award, in part, because of his outstanding work in Emmanuel Theodorakis’s lab studying fluorescent molecules that can be used for detection of amyloid plaques, which are linked to Alzheimer’s disease. Today, Alzheimer’s disease is clinically diagnosed once cognitive symptoms become evident. The Theodorakis lab is working to develop diagnostic molecules to identify the disease in its initial stages—even before the behavior associated with Alzheimer’s shows up.

According to his professor, Do worked diligently to make small molecules that could help monitor and identify the disease in its early stages. “Thai is consistent, methodical and always interested in learning more,” said Theodorakis. “He is always smiling.”

Do asked to work in Theodorakis’s lab after taking organic chemistry with the professor in 2010.  According to Do, his father deals with psychological issues that developed as a result of his harrowing experiences in Vietnam. Inspired by his father’s plight, Do became interested in studying disorders affecting the brain.

“I was always intrigued by what my father had to deal with, and I often didn’t understand it,” said Do.  “This was a way to reconnect with my family. I’m pursuing my curiosity on a topic close to home.”

Do counts his undergraduate research experience as a highlight of his time on campus. “It makes me utilize knowledge from class in practical applications,” he said. “There is a disconnect between the book and real life, and the opportunity to be exposed to real world research has been invaluable.”

Do is currently applying to medical programs around the country with the goal of helping others as a physician. Recalling how difficult it was for his family to get proper medical attention when he was growing up, Do hopes to use his degree to help others less fortunate.

To support students like Do as part of the Physical Sciences Dean’s Awards, please click here, or to learn more about giving to the Division of Physical Sciences, please visit physicalsciences.ucsd.edu/giving.