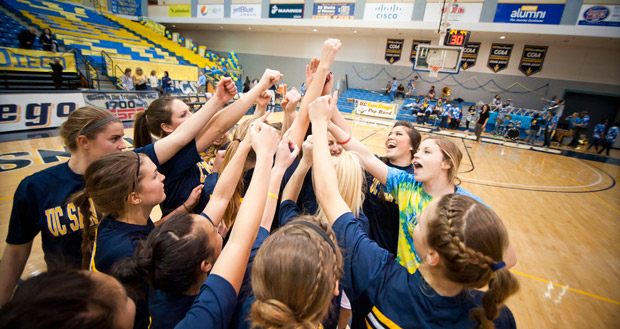 The top-ranked UC San Diego women's basketball team wrapped up a historic 2011-12 regular season on Friday, dispatching Sonoma State by a final margin of 78-58 at The Wolves' Den on the SSU campus.

Daisy Feder scored a career-high 26 points and Erin Dautremont put in 16 to guide UCSD to a convincing win on the final night of California Collegiate Athletic Association play. The Tritons shot 48% from the field and sank 10-of-23 from the three-point line to sweep the season series with the Seawolves and head into the postseason on a winning note.

UCSD wraps up the regular season with an overall record of 27-1 and an impressive 21-1 mark in CCAA play, finishing with a commanding six-game lead in the conference standings.

The Tritons will be the top seed in next week's CCAA Championship Tournament and host eighth-seeded SSU in the first round on Tuesday evening at RIMAC Arena.

After suffering their first loss of the season on Wednesday at Humboldt State, the Tritons came back with a vengeance against the Seawolves on Friday, shooting a blistering 56% in the opening half and building a commanding 18-point advantage. 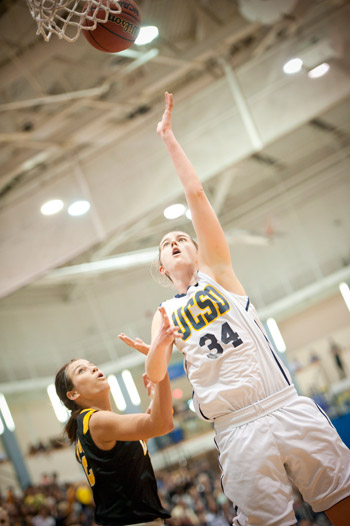 Erin Dautremont finished with 16 points against the Seawolves Friday.

SSU clawed its way back to within five with 12 and a half minutes to play in the second half, but UCSD answered with a 12-4 run to slam the door shut and post another convincing victory over the Seawolves.

"I'm so proud of how we responded after a tough loss the other night," fifth-year head coach Charity Elliott said. "I was really pleased with our focus early on and I thought we really set the tone in the first few minutes."

Feder was brilliant for the Tritons, finishing 8-of-14 from the field and 5-of-9 from behind the arc to lead all scorers in the game. The senior guard, who has now scored in double figures in 19 straight games dating back to mid-December, eclipsed her previous high of 23 points that came in UCSD's first meeting with Sonoma State back in January. She also tallied six rebounds and a pair of steals in just 26 minutes.

"Daisy was unbelievable tonight," Elliott continued. "We got a lot of good minutes from several people and the bench played really well, but Daisy really carried us through."

Dautremont was 8-of-12 from the floor and grabbed four boards, while Chelsea Carlisle also reached double figures for the Tritons, scoring 12 points to go with a game-high six assists.

Aly Conway finished with 13 points and 13 rebounds to lead the way for the Seawolves, who shot a woeful 31% from the floor for the game. Jaclyn Bisordi, the team's leading scorer, finished with 11 points but shot just 2-of-11 from the field, while Travis Newman contributed 10 points and six boards off the bench.

UCSD was in control from the outset and took a 23-13 lead following a triple from Emily Osga and five straight points from Feder. SSU scored the next six to pull within 23-19, but the Tritons answered with a 12-0 run over the next two and a half minutes to take a commanding 16-point cushion with 6:47 remaining in the opening half.

UCSD pushed the lead to 18 at 43-25 following a Feder jumper, but the Seawolves would score the final four points of the period to pull within 43-29 at the break.

The home team carried that momentum into the second half, putting up nine unanswered at one point to close to within 47-42 with 12:33 remaining. It was all Tritons after that though as Feder hit a pair of free throws and Carlisle sank a long three to push the lead back to 10.

A bucket by Osga made it 64-50 five minutes later and UCSD continued to build on its lead from there, taking its biggest advantage of the evening at the final horn.

It was a fitting end to an incredible regular season for the Tritons, who not only put together the best run in school history with 26 straight wins, but also racked up the best regular season record in the history of the CCAA. Friday's win represented another milestone as UCSD matched the program record for victories in a season.

Tip-off for Tuesday's CCAA Tournament First Round clash is scheduled for 7:00 p.m. The Tritons defeated the Seawolves, 73-57, in the first meeting of the year on January 20 in La Jolla and have now won nine straight over Sonoma dating back to the 2007-08 season.

"It's been a really great year and we've played very well, but now a whole new season begins," Elliott concluded. "We've got to get ready starting Tuesday night, because we've got a long way to go before we accomplish our goals."