Differences divide us. Human society fractures along lines defined by politics, religion, ethnicity, and perhaps most fundamentally, language. Although these differences contribute to the great variety of human lives, the partitions they create can lead to conflict and strife, impeding efforts toward social justice and economic development.

David Meyer, professor of mathematics at the University of California, San Diego, has been developing new ways of understanding how characteristics like ethnicity and religion coincide to define communities and ultimately influence our actions.

“I’ve been thinking about mathematical aspects of political conflict for a couple of years,” Meyer said. “Civil war results from this. Understanding how civil wars spread relies on understanding social divisions.”

Meyer’s group of research scientists, postdocs and students in mathematics and political science has developed a new way to characterize the relationships among communities defined by different characteristics such as language or religion.

Their efforts to mathematically describe these different geographies won the prize for Best Scientific project in the French telecommunications company Orange’s Data for Development (D4D) Challenge. Their project was recognized at the NetMob conference on May 1, 2013 for proposing an innovative methodology, addressing a new question, and for relevant, original findings.

They validated their approach in Côte d’Ivoire, where French is the national language, yet more than 70 regional languages are spoken as well. Nearly 85 percent of people living there use cell phones. 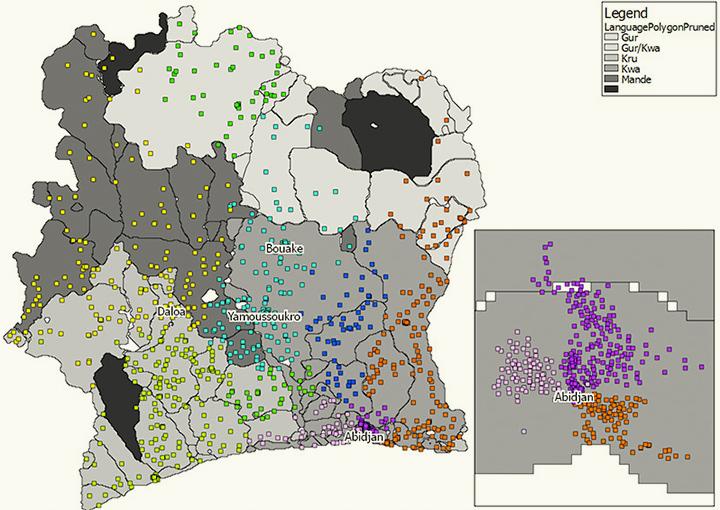 Squares mark each cell-phone antenna with colors corresponding to communities defined by high volumes of calls between towers (click on image for larger view).

Using data provided by Orange, they mapped connections among 1216 cell phone towers for five months. The volume of calls passed from one tower to the next revealed “communities” of antennas based on strengths of the connections, a geographical map of who talks with whom throughout the country.

They compared this to a second map of which languages are spoken by the majority of people in each region. With 60 different languages spoken by local majorities, the comparison was computationally intensive.

The two maps closely agree. It’s no surprise given the likelihood of talking most often with those who share your language, but their measure also sorts out an often-confounding factor: proximity.

“It applies to comparing any two maps,” Meyer said. “Nearby locations are likely to be in the same category. Even with this adjustment to the comparison, we found an extremely strong association.”

Their results show that telecommunications data could provide information about language communities in places where those languages haven’t been studied and mapped as completely as they have in Côte d’Ivoire.

More generally, their method can be used to estimate the significance of associations between geographic divisions that arise from other factors as well.