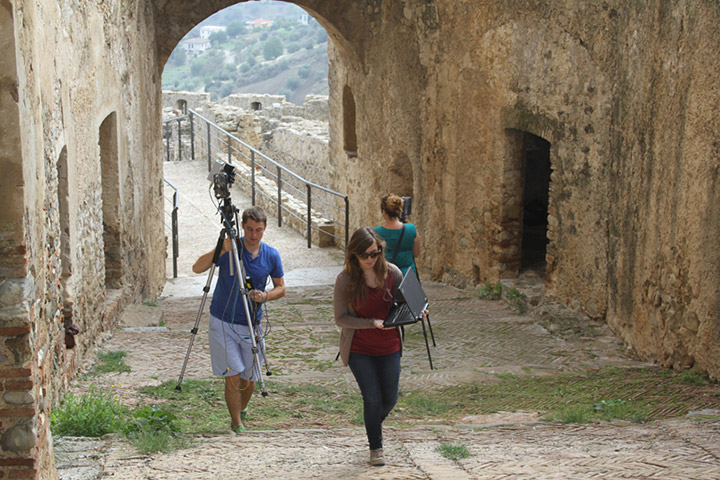 An interdisciplinary team of Ph.D. students from the University of California, San Diego, recently spent time at archaeological sites in the southern Italian region of Calabria, and they came away with a newfound respect for the daily routine of uncovering the past – and a better understanding of how to safeguard archaeological sites and artifacts for the future.

The Oct. 8-15 visit coincided with the signing of a Memorandum of Understanding (MOU) between UC San Diego’s Center of Interdisciplinary Science for Art, Architecture and Archaeology (CISA3) and the Department of Archaeology and Art History of Italy’s University of Calabria (UNICAL).

Professor Giuseppe Roma, head of the Department of Archaeology and History at the University of Calabria, extended an invitation to the CISA3 team to visit and work in a handful of sites that represent civilizations going back at least to the Greeks.

Forms of collaboration, as stated in the MOU, may include: exchanges of faculty, graduate students, postdoctoral scholars and information; joint research projects and publications; and “special” short-term programs and visits, including field work and workshops. 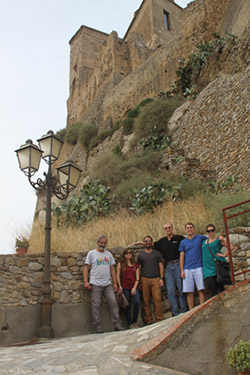 “This is an important partnership because the two sides have interests that are closely aligned,” said CISA3 Director Falko Kuester about the document signed by UCSD Vice Chancellor for Research Sandra Brown. “Calabria is the location of some of the most important archaeological finds in Europe going back many civilizations, and UC San Diego is developing technologies and new methodologies that will enhance our ability to uncover the secrets of our past.”

Kuester, who is also Principal Investigator on UCSD’s National Science Foundation (NSF) IGERT graduate training grant in cultural heritage diagnostics, led CISA3’s Calabria expedition including UCSD IGERT Ph.D. students David Vanoni and Vid Petrovic (both Computer Science and Engineering); Michael Hess (Structural Engineering); Samantha Stout (Materials Science), and Ashley M. Richter (Anthropological Archaeology). “One truly remarkable aspect of this expedition was the strong leadership role that our students took in planning, organizing and executing the expedition, demonstrating the unique talent set that these emerging innovators have at their disposal,” explained Kuester. “Beyond advancing research on their respective dissertations, they demonstrated what it means to do interdisciplinary work across historic domain boundaries, while catalyzing new international collaborations.”

The team stayed in the medieval town of Rocca Imperiale, where the University of Calabria has been excavating at numerous sites in and around the historic city.

Digitizing archaeological sites was a major focus as the 2013 excavation season neared its conclusion. Murgie di Santa Caterina is an early medieval monastery site built on top of several layers of previous occupation dating back to prehistory. The CISA3 team worked with members of the UNICAL team on how to collect data and brainstorm ways to improve data collection, processing, and analysis, as well as new cyber-archaeology tools. While CISA3 students focused on building a virtual model of the site using terrestrial laser scanning, UNICAL researchers created time-lapse data sets using Structure-from-Motion (SfM) modeling to document the process of excavation. They were also digitizing 3D models of excavated pottery for later analysis. 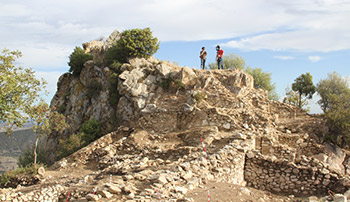 Overlooking the medieval city is the Castello Svevo di Rocca Imperiale. After a grassroots movement, townspeople got the municipality to purchase the historic site and refurbish it. Ongoing excavations have turned up secret passageways and lower levels. After the architect in charge of the project gave the CISA3 team a tour of the site, the UC San Diego students undertook to digitally document the Castello Svevo using photogrammetry, laser scanning, Structure-from-Motion, and stereoscopic photography, as well as thermal imaging on both the interior and exterior of the structure for structural analysis. A major goal was to collect the reference record needed to study the castle’s state of health over time and ascertain how well the castle might withstand a sizeable earthquake.

The same technologies, plus X-ray fluorescence (XRF), were deployed in an effort to determine the structural health of the Santuario di Santa Regina di Anglona. The Sanctuary is an 11th century church decorated with a fresco depicting a complex mixture of symbols on the church’s walls and columns – reflecting a rare, brief period of peace between local Christian and Muslim communities in the region. Professors Roma of the University of Calabria and Kuester of UC San Diego led the joint team, which determined that despite several restorations, many of the church’s walls are sloping badly. A probable cause is soil settlement, combined with past seismic activity in the region and continuous monitoring would be desirable to capture further changes early. The XRF was used to analyze the material used for the wall frescoes, which could shine a light on their origins. “The Sanctuary is one of the most prominent monuments of the region,” said Kuester, who is also a professor of structural engineering at UC San Diego. “The new data we acquired will help us create a conservation plan for the highly-valued sanctuary – the only standing architecture that remains of the ancient city that once enveloped the hill around it.”

Another highlight of the expedition was a visit to the ancient city of Sybaris, a Greek colony that thrived some 3,000 years ago, earning so much wealth that the English adjective, sybaritic, derives from the excessive luxury for which the ancient city was known – a city that was lost to history until it was re-discovered and excavated starting in the 1960s. 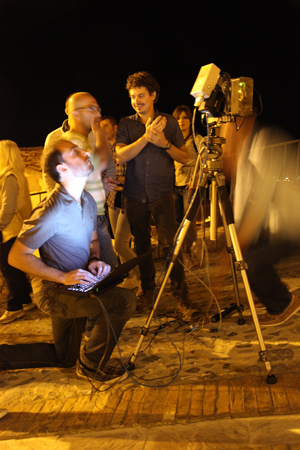 David Vanoni (foreground) adjusts the thermal camera during a night shoot at the Castle Svevo.

The team from CISA3 also updated their Calabrian counterparts on efforts to adapt technologies to the needs of archaeologists in the field. The two sides also shared their latest thoughts on other issues facing archaeologists everywhere, including data management, visualization of multimedia for analysis of cultural artifacts, user interfaces, and technology for archaeological research.

“The University of Calabria and others are moving into the realm of digital archaeology with increasing speed,” said Ashley Richter, the Ph.D. student in archaeology on the expedition. “However, they do not often have the equipment to do so themselves. With laser scanning for instance, data acquisition is frequently outsourced to firms with little to no archaeology experience, but all the right technical proficiency. CISA3 is bridging that gap.”

“The key part is our integrative diagnostic imaging methodology, which creates spatially and temporally layered information in one sweep,” added Kuester. “This methodology allows different data modalities to inform each other, creating a means to really capture the big picture.”

As the CISA3 team’s stay in Calabria neared its end, the mayor of Rocca Imperiale, Ferdinando Di Leo, called a press conference to let the media know some of the highlights of the 2013 excavation season, including the participation of UC San Diego faculty and Ph.D. students. The mayor insisted that international collaboration is critical to future archaeologists in the region.The press conference ended in particular Calabrian fashion – with a toast (and taste) of prosecco, an Italian sparkling wine.

After the press conference, Mayor Di Leo had a special request. The central church of Rocca Imperiale, Santa Maria in Cielo Assunta, has been continually destroyed and rebuilt since the 12th century. The mayor wanted to show the UC San Diego team a palimpsest of stonework on one of the outer walls of the church. The group brought along some of their equipment to capture and potentially analyze the palimpsest.

The final day ended with another surprise: at the bed-and-breakfast inn where the CISA3 team was staying, the mayor commandeered the kitchen and insisted on personally cooking his special “midnight spaghetti” for American and Italian collaborators.