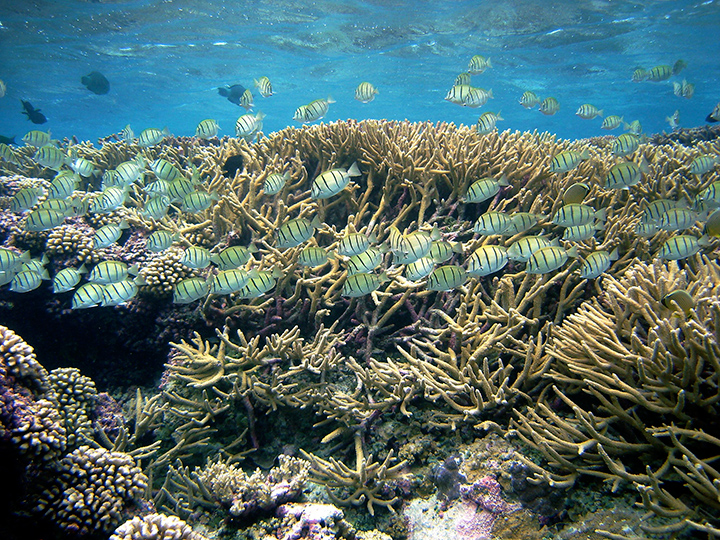 Reef-building corals create an oasis of life and diversity in a sparse ocean. Because branching Acropora corals such as those pictured here in the Central Pacific are in peril from climate change, the whole ecosystem is in danger of collapse. Photo credit: Melissa Roth

Coral reefs not only provide the world with rich, productive ecosystems and photogenic undersea settings, they also contribute an economic boost valued at hundreds of billions of dollars. But their decline in recent years due to a variety of threats—from pollution to climate warming—has lent urgency to the search for new ways to evaluate their health.

A new study by Scripps Institution of Oceanography at UC San Diego scientists has revealed that fluorescence, the dazzling but poorly understood light produced by corals, can be an effective tool for gauging their health.

Bleached coral tissue is transparent exposing the white skeleton, but the coral is still alive and polyps can be seen with fluorescence. Photo credit: Dimitri Deheyn and Peter Kragh.

In experimental studies conducted at Scripps, Roth and Deheyn tested the common Indo-Pacific reef-building branching coral Acropora yongei under various temperatures. Branching corals are susceptible to temperature stress and often one of the first to show signs of distress on a reef. Roth and Deheyn found, at the induction of both cold and heat stress, corals rapidly display a decline in fluorescence levels. If the corals are able to adapt to the new conditions, such as to the cold settings in the experiment, then the fluorescence returns to normal levels upon acclimation.

While the corals recovered from cold stress, the heat-treated corals eventually bleached and remained so until the conclusion of the experiment. Coral bleaching, the loss of tiny symbiotic algae that are critical for coral survival, is a primary threat to coral reefs and has been increasing in severity and scale due to climate change. In this study, the very onset of bleaching caused fluorescence to spike to levels that remained high until the end of the experiment. The researchers noted that the initial spike was caused by the loss of “shading” from the symbiotic algae. 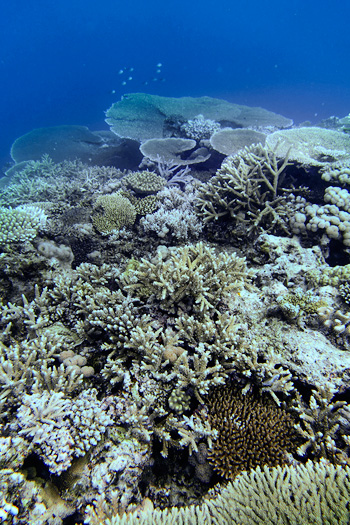 Branching and table-top corals of the genus Acropora dominate coral reef ecosystems such as those pictured here from the Indo-Pacific. Branching corals are amongst the most sensitive to temperature change and often the first to bleach under stress. Photo credit: Melissa Roth

“This is the first study to quantify fluorescence before, during, and after stress,” said Deheyn. “Through these results we have demonstrated that changes in coral fluorescence can be a good proxy for coral health.”

Deheyn said the new method improves upon current technologies for testing coral health, which include conducting molecular analyses in which coral must be collected from their habitat, as opposed to fluorescence that can be tested non-invasively directly in the field.

Corals are known to produce fluorescence through green fluorescent proteins, but little is known about the emitted light’s function or purpose. Scientists believe fluorescence could offer protection from damaging sunlight or be used as a biochemical defense generated during times of stress.

“This study is novel because it follows the dynamics of both fluorescent protein levels and coral fluorescence during temperature stress, and shows how coral fluorescence can be utilized as an early indicator of coral stress” said Roth, a Scripps alumna who is now a postdoctoral scientist at Lawrence Berkeley National Laboratory and UC Berkeley.

The National Science Foundation (NSF), an NSF Graduate Research Fellowship, and the Air Force Office of Scientific Research’s Natural Materials, Systems and Extremophiles program supported the research. Birch Aquarium at Scripps provided the corals and technical support for the experiments.