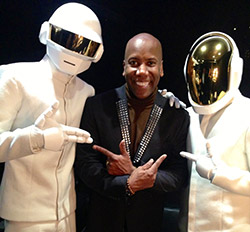 UC San Diego alumnus Nathan East with Daft Punk, after they performed together at the Grammy Awards on Jan. 26. East provided the original bass line for Daft Punk’s “Get Lucky,” which won Record of the Year.

East is a Grammy nominee who has played with the likes of jazz, rock and pop royalty from Michael Jackson and Eric Clapton, to Paul McCartney and Beyoncé. Just last week, he played the 56th Annual Grammy Awards with Daft Punk, performing the band’s Record of the Year-winning, “Get Lucky,” with Pharrell and Stevie Wonder.

More than 500 people entered the contest, which ran from Jan. 16 to 21. The winners are: Stephanie Bailey, Barbara Bonebright, Nhat-Dang Do, Matthew Eliaser and Patti Koger.

The concert, hosted by UCSD Alumni, is set for 3 to 5 p.m. in the Conrad Prebys Concert Hall at UC San Diego. Tickets, which are entirely tax deductible, are $75 for general admission, $60 for alumni and $20 for students with valid ID; students from all schools are welcome. Parking is free; tickets will be held at the door. Tickets are going fast. For information and tickets, please visit rels.ucsd.edu.