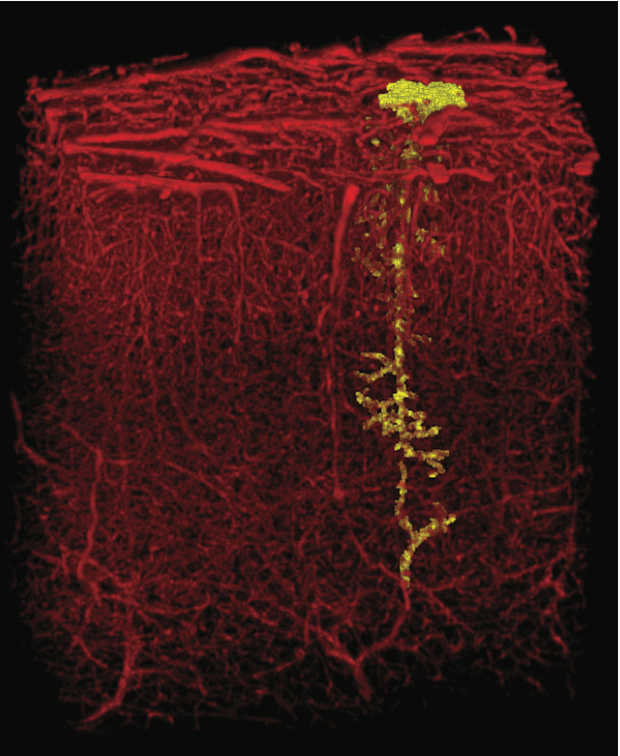 Blocking a single tiny blood vessel, like the one highlighted in yellow, can damage brain tissue and cause a change in behavior. The image depicts the vessels in a cubic millimeter of cerebral cortex. Credit: David Kleinfeld lab.

Blocking a single tiny blood vessel in the brain can harm neural tissue and even alter behavior, a new study from the University of California, San Diego has shown. But these consequences can be mitigated by a drug already in use, suggesting treatment that could slow the progress of dementia associated with cumulative damage to minuscule blood vessels that feed brain cells. The team reports their results in the December 16 advance online edition of Nature Neuroscience.

“The brain is incredibly dense with vasculature. It was surprising that blocking one small vessel could have a discernible impact on the behavior of a rat,” said Andy Y. Shih, lead author of the paper who completed this work as a postdoctoral fellow in physics at UC San Diego. Shih is now an assistant professor at the Medical University of South Carolina.

Working with rats, Shih and colleagues used laser light to clot blood at precise points within small blood vessels that dive from the surface of the brain to penetrate neural tissue. When they looked at the brains up to a week later, they saw tiny holes reminiscent of the widespread damage often seen when the brains of patients with dementia are examined as a part of an autopsy.

These micro-lesions are too small to be detected with conventional MRI scans, which have a resolution of about a millimeter. Nearly two dozen of these small vessels enter the brain from a square millimeter area of the surface of the brain.

“It’s controversial whether that sort of damage has consequences, although the tide of evidence has been growing as human diagnostics improve,” said David Kleinfeld, professor of physics and neurobiology, who leads the research group.

To see whether such minute damage could change behavior, the scientists trained thirsty rats to leap from one platform to another in the dark to get water.

The rats readily jump if they can reach the second platform with a paw or their snout, or stretch farther to touch it with their whiskers. Many rats can be trained to rely on a single whisker if the others are clipped, but if they can’t feel the far platform, they won’t budge.

“The whiskers line up in rows and each one is linked to a specific spot in the brain,” Shih said. “By training them to use just one whisker, we were able to distill a behavior down to a very small part of the brain.”

When Shih blocked single microvessels feeding a column of brain cells that respond to signals from the remaining whisker, the rats still crossed to the far platform when the gap was small. But when it widened beyond the reach of their snouts, they quit.

The FDA-approved drug memantine, prescribed to slow one aspect of memory decline associated with Alzheimer’s disease, ameliorated these effects. Rats that received the drug jumped whisker-wide gaps, and their brains showed fewer signs of damage.

“This data shows us, for the first time, that even a tiny stroke can lead to disability,” said Patrick D. Lyden, a co-author of the study and chair of the department of neurology at Cedars-Sinai Medical Center in Los Angeles. “I am afraid that tiny strokes in our patients contribute—over the long term—to illness such as dementia and Alzheimer’s disease,” he said, adding that "better tools will be required to tell whether human patients suffer memory effects from the smallest strokes.”

“We used powerful tools from biological physics, many developed in Kleinfeld's laboratory at UC San Diego, to link stroke to dementia on the unprecedented small scale of single vessels and cells,” Shih said. “At my new position at MUSC, I plan to work on ways to improve the detection of micro-lesions in human patients with MRI. This way clinicians may be able to diagnose and treat dementia earlier.”