UC San Diego professor takes his place among the most dynamic, innovative composers in the world

University of California San Diego professor and world-renowned composer Lei Liang has won the 2020 Grawemeyer Award for Music Composition for his orchestral work that both evokes the realities of climate change — rising oceans, flooded cities, tumbling mountains — and offers the enduring potential for healing.

Described as painting with a sonic brush, the winning composition “A Thousand Mountains, A Million Streams” was commissioned by the Boston Modern Orchestra Project and received its world premiere April 21, 2018. The recognition is one of contemporary music’s highest honors.

“The world we live in today is dangerous. Our very existence is threatened by global warming, which is causing violent disruptions to the living things on our planet and being made worse by human irresponsibility,” Liang said.

Performed in two parts, the composition was developed during Liang’s multiple residencies at the UC San Diego Qualcomm Institute: first as Composer in Residence and, currently, as the inaugural Research Artist in Residence.

“‘A Thousand Mountains, A Million Streams’ meditates on the loss of landscapes of cultural and spiritual dimensions. The work implies an intention to preserve and resurrect parallel landscapes — both spiritual and physical — and sustain a place where we and our children can belong,” he said.

Humbled by the honor, Liang said the work would not have been possible without the residencies, where he first collaborated with UC San Diego Jacobs School of Engineering professor Falko Kuester on multidisciplinary research of contemporary Chinese landscape paintings and writings by Huang Binhong (1865 – 1955).

Called “Hearing Landscapes,” the project changed Liang’s approach to music and composition in a fundamental way, he said.

“Working in our unique research environment allowed me to pursue this dynamic and interdisciplinary project, and I am grateful for the extraordinary opportunity our Division of Arts and Humanities and Qualcomm Institute offered me,” Liang said.

“Lei’s work truly exemplifies the impact that can be created when art, science and technology merge. This interdisciplinary project is at the heart of what we do at the Qualcomm Institute, and we are proud of the contributions Lei has made to his field and to the critically important quest to understand the impacts of climate change,” said Ramesh Rao, Qualcomm Institute director.

Liang joins a short list of some of the most innovative and influential composers in the world. Current UC San Diego Department of Music faculty member Chinary Ung received the award in 1989 and, other than Ung and Liang, no other composer in the entire University of California system has ever received this prize.

“This is one of the most prestigious prizes given internationally to composers, [and] the list of former recipients includes many of the most distinguished composers of our time,” said Distinguished Professor Rand Steiger, Conrad Prebys Presidential Chair in Music at UC San Diego. “I couldn’t be happier and more proud of my dear friend and colleague.”

Liang has received numerous honors, including a 2015 Koussevitzky Foundation Award, the 2011 Rome Prize, a 2009 Guggenheim Fellowship and a 2008 Aaron Copland Award. His saxophone concerto “Xiaoxiang” was a finalist for the Pulitzer Prize in Music in 2015. 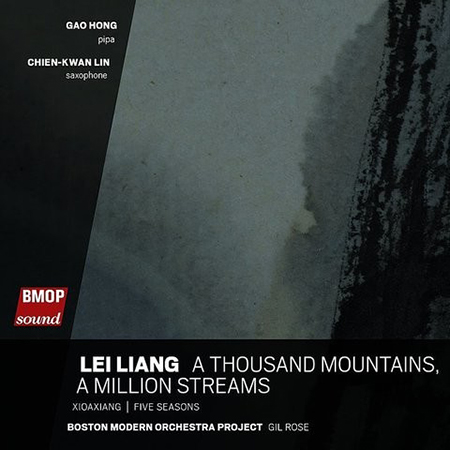 Listen to “A Thousand Mountains, A Million Streams” at Schott Music

Born in Tianjin, China, Liang came to the United States as a high school student. He earned degrees from the New England Conservatory of Music and Harvard University. Liang joined the UC San Diego Department of Music in 2007, where he, in part, brings collaborative opportunities to students from the Division of Arts and Humanities, Jacobs School of Engineering and Scripps Institution of Oceanography.

What is now five annual prizes given in the fields of music, political science, psychology, education and religion, H. Charles Grawemeyer created the Grawemeyer Awards at the University of Louisville in 1984.

In 1985, the first Grawemeyer Award for Music Composition went to Polish composer Witold Lutoslawski. Since then, the award has achieved international recognition as the premier music-composition award. Often described as the Nobel Prize of classical music, it regularly attracts between 150 and 200 entries each year from around the world.

“Liang’s piece, which explores a huge range of emotions and ends with both hope and ambiguity, has a forceful, convincing arc and wonderful orchestral colors,” said Marc Satterwhite, director of the Grawemeyer Award in Music Composition. “Like some of our other winners, he challenges people inside and outside the field of music to ponder important things, even when it’s uncomfortable to do so.”

In addition to the award, Liang will receive $100,000 and visit the University of Louisville in April 2020 to present public talks on his winning composition.