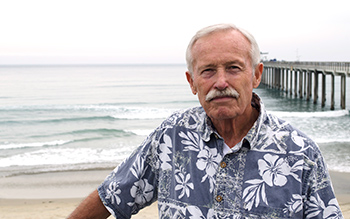 A team led by William Fenical at Scripps Institution of Oceanography at UC San Diego has discovered a new chemical compound from an ocean microbe in a preliminary research finding that could one day set the stage for new treatments for anthrax and other ailments such as methicillin-resistant Staphylococcus aureus (MRSA).

As reported in the international edition of the German journal Angewandte Chemie, Scripps researcher Chris Kauffman in Fenical’s group first collected the microorganism that produces the compound in 2012 from sediments close to shore off Santa Barbara, Calif. Fenical’s team in the Scripps Center for Marine Biotechnology and Biomedicine, working in conjunction with San Diego-based Trius Therapeutics, used an analytical technique known as spectroscopy to decipher the unusual structure of a molecule from a microscopic species known as Streptomyces. Initial testing of the compound, which they named anthracimycin, revealed its potency as a killer of anthrax, the infectious disease often feared as a biological weapon, as well as MRSA.

“The real importance of this work is the fact that anthracimycin has a new and unique chemical structure,” said Fenical, who added that the finding is a basic research discovery, which could lead to testing and development, and eventually a drug. “The discovery of truly new antibiotic compounds is quite rare. This discovery adds to many previous discoveries that show that marine bacteria are genetically and chemically unique.” 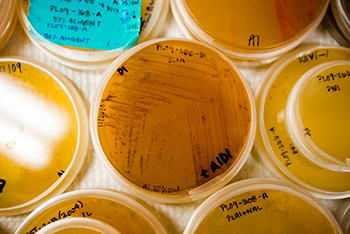 Marine samples being readied for study in William Fenical's laboratory.

The discovery provides the latest evidence that the oceans, and many of its unexplored regions, represent a vast resource for new materials that could one day treat a variety of diseases and illnesses. Fenical, a distinguished professor of oceanography and pharmaceutical science, helped found the field of marine biomedicine as a researcher at Scripps. He is a pioneer in discovering and identifying these novel compounds. His research has helped bring attention to the need for continued exploration of the ocean for science and society.

In addition to Fenical and Kauffman, coauthors of the paper include Kyoung Jang, Sang-Jip Nam, Deanna Beatty, and Lauren Paul of Scripps and Jeff Locke of Trius Therapeutics.

The National Institutes of Health and the Transformational Medical Technologies program of the Department of Defense Chemical and Biological Defense Program through the Defense Threat Reduction Agency supported the research.