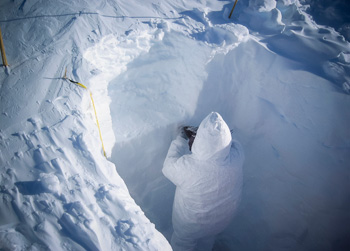 Particles from the upper atmosphere trapped in a deep pile of Antarctic snow hold clear chemical traces of global meteorological events, a team from the University of California, San Diego and a colleague from France have found.

Anomalies in oxygen found in sulfate particles coincide with several episodes of the world-wide disruption of weather known as El Niño and can be distinguished from similar signals left by the eruption of huge volcanoes, the team reports in the early online edition of the Proceedings of the National Academy of Sciences published the week of February 25.

“Our ability to link of reliable chemical signatures to well-known events will make it possible to reconstruct similar short-term fluctuations in atmospheric conditions from the paleohistory preserved in polar ice,” said Mark Thiemens, Dean of the Division of Physical Sciences and professor of chemistry and biochemistry, who directed the research and dug up much of the snow.

“At an elevation of 10,000 feet and 55 degrees below zero, this was quite a task,” Thiemens said. Their efforts exposed a 22 year record of snowfall, a pileup of individual flakes, some of which crystallized around particles of sulfate that formed in the tropics.

Atmospheric sulfates form when sulfur dioxide – one sulfur and two oxygen molecules – mixes with air and gains two more oxygen molecules. This can happen a number of different ways, some of which favor the addition of variant forms of oxygen, or isotopes, with and extra neutron or two, previous work by Thiemens’s group has shown.

Unlike polar ice, which compresses months of precipitation so tightly that resolution is measured in years, relatively fluffy snow allowed the team to resolve this record of atmospheric chemistry on a much finer scale. 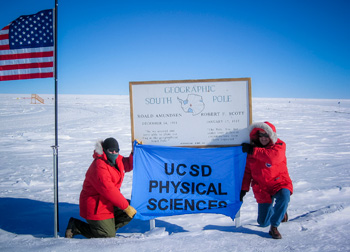 “That was key,” said Robina Shaheen, a project scientist in Thiemen’s research group who led the chemical analysis. “This record was every six months. That high resolution made it clear we can trace a seasonal event such as ENSO.”

ENSO, the El Niño Southern Oscillation, is a complex global phenomenon that begins when trade winds falter allowing piled up in the tropical western Pacific to slosh toward South America in a warm stream that alters marine life crashing fisheries off Peru and Chile, and disrupts patterns of rainfall leaving parts of the planet drenched and others parched.

The warmed air above the sea surface lifts sulfur dioxide high into the stratosphere, where it’s oxidized by ozone, which imparts a distinctly different, anomalous pattern of oxygen isotopes to the resulting sulfate particles.

In the Antarctic snow samples, the chemists found traces of these oxygen anomalies in sulfates trapped within layers of snow that fell during strong El Niño seasons.

Volcanoes too can shoot sulfur compounds high into the atmosphere where they react with ozone to produce sulfates with oxygen anomalies. Three large volcanoes, El Chichón, Pinatubo and Cerro Hudson, erupted over the course of this time sample, which stretched from 1980 to 2002 and encompassed three ENSO events as well.

Although the amount of sulfates in the snow record peaked following large eruptions, the anomalous oxygen signal was found even in the smaller amount of sulfate deposited during the ENSO season with little volcanic activity. That means the balance of oxygen isotopes in sulfates could be used to recognize ENSO years within the longer climatic records held by ice cores.

Additional authors include Mariana Abauanza and Teresa Jackson, both members of Thiemens’s research group at UC San Diego. The National Science Foundation funded the work through the Atmospheric Chemistry Program and Office of Polar Programs. The collaboration between Savarino and the UC San Diego researchers was made possible by grants from Agence Nationale de la Recherche and the Centre Nationale de la Recherche Scientifique exchange program.