BPA’s Real Threat May Be After It Has Metabolized

Chemical found in many plastics linked to multiple health threats

Bisphenol A or BPA is a synthetic chemical widely used in the making of plastic products ranging from bottles and food can linings to toys and water supply lines. When these plastics degrade, BPA is released into the environment and routinely ingested.

New research, however, from the University of California, San Diego School of Medicine suggests it is the metabolic changes that take place once BPA is broken down inside the body that pose the greater health threat.

More than 90 percent of all Americans are believed to carry varying levels of BPA exposure.

In recent years, numerous studies have reported alarming associations between BPA exposure and myriad adverse health and development effects, from cancer and neurological disorders to physiological defects and, perhaps, a cause of childhood obesity. 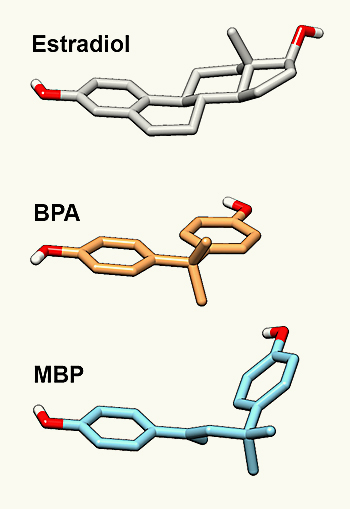 In binding to the estrogen receptor, BPA can disrupt the body’s endocrine or hormone system, with consequences especially worrisome for fetuses, infants and young children. Earlier this year, the U.S. Food and Drug Administration banned BPA in baby bottles and sippy cups. Its use is more broadly banned elsewhere in the world.

In new research published in the October 4 online issue of the journal PLOS ONE,  two scientists at UC San Diego School of Medicine say three-dimensional modeling suggests a metabolite of BPA – a molecule produced when BPA is metabolized or broken down by the body – actually binds to the estrogen receptor much more strongly than BPA itself. The finding could point the way to development of a new class of drugs designed to specifically inhibit excessive estrogen activity linked to disease.

According to Michael E. Baker, PhD, UCSD professor of medicine, and Charlie Chandsawangbhuwana, a graduate student in the UCSD Department of Bioengineering, several research labs have reported that BPA binds weakly to the estrogen receptor, suggesting that something else is interacting with this receptor.

In 2004, Shin'ichi Yoshihara, PhD, and colleagues at Hiroshima International University, discovered that another compound, dubbed MBP, was produced when BPA was metabolized.  MBP has a 100-fold to 1,000-fold stronger bond to the estrogen receptor than BPA. However, the structural basis for MBP’s high affinity for the estrogen receptor was not investigated further.

“In other words, MPB is basically grabbing onto the estrogen receptor with two hands compared to just one hand for BPA,” said Baker. “Two contact points makes a much stronger connection.”

Baker said the 3D modeling supports the idea “that BPA is not the endocrine disruptor culprit. Instead, MBP is one (of perhaps several BPA metabolites) that causes disruption of estrogen signaling in humans and other animals.”

He said the research points to the need to measure MBP levels in urine and blood of patients suspected of BPA-mediated health effects, and may fuel development of a new therapeutic treatment for conditions linked to excessive estrogen levels and activity, such as some forms of breast and prostate cancers.

“One could use MBP, which has a novel structure, as a template to develop a new class of chemicals that could bind to the estrogen receptor with high affinity,” Baker said. “The goal would be to have these chemicals inhibit the action of estradiol instead of activating the estrogen response. These chemicals could control unwanted growth of estrogen-dependent tumors.”