Boom and Bust Economist To Speak 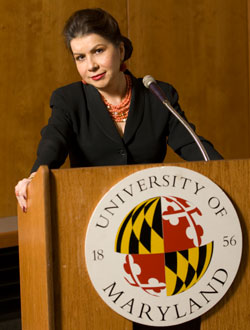 Carmen Reinhart, the Dennis Weatherstone Senior Fellow at the Peterson Institute for International Economics, will speak on “After the Fall” at 7:30 am Thursday, October 20 at the University of California San Diego Faculty Club. The $50.00 per person cost to attend the Economics Roundtable includes continental breakfast and parking.

Reinhart held positions as chief economist and vice president at the investment bank Bear Stearns in the 1980s, where she became interested in financial crisis, international contagion and commodity price cycles.  Subsequently she spent several years at the International Monetary Fund.

Her best-selling book (with Kenneth Rogoff) entitled “This Time is Different: Eight Centuries of Financial Folly” documents the striking similarities in the recurring booms and busts that have characterized financial history. This year Reinhart and Rogoff published a new book, “A Decade of Debt.” The book presents evidence that public debts in the advanced economies have surged in recent years to levels not recorded since the end of World War II, surpassing the heights reached during the First World War and the Great Depression.

She was previously professor of economics and director of the Center for International Economics the University of Maryland.  She received her Ph.D. from Columbia University.  She is a research associate at the National Bureau of Economic Research, a research fellow at the Centre for Economic Policy Research, and a member of the Council on Foreign Relations.

Reinhart has served on numerous editorial boards, panels, and has testified before the U.S. Congress.  She has written and published on a variety of topics in macroeconomics and international finance and trade including: international capital flows, exchange rates, inflation and commodity prices, banking and sovereign debt crises, currency crashes, and contagion.  Her papers have been published in leading scholarly journals.

Her work has helped to inform the understanding of financial crisis for over a decade. In the early 1990s, she wrote about the fickleness of capital flows to emerging markets and the likelihood of abrupt reversals—before the Mexican crisis of 1994 – 1995.  Prior to the Asian crisis (1997- 1998), she documented the international historical links between asset price bubbles and banking crises, and how the latter could lead to currency crashes creating a “twin crisis.”  She identified the possibility of several economic dislocations from the sub-prime crisis of 2007.  Her work is frequently featured in the financial press around the world.