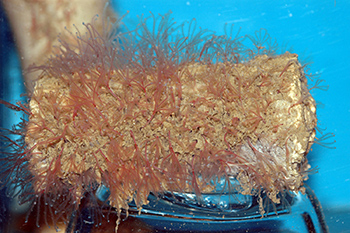 Only within the past 12 years have marine biologists come to learn about the eye-opening characteristics of mystifying sea worms that live and thrive on the bones of whale carcasses.

With each new study, scientists have developed a better grasp on the biology of Osedax, a genus of mouthless and gutless “bone worms” that make a living on skeletons lying on the seafloor. In the latest finding, scientists at Scripps Institution of Oceanography at UC San Diego describe how the wispy worms are able to carry out their bone-drilling activities. As published in the May 1 online edition of the Proceedings of the Royal Society B (Biological Sciences), Martín Tresguerres, Sigrid Katz, and Greg Rouse of Scripps detail how Osedax excrete a bone-melting acid to gain entry to the nutrients within whale bones. 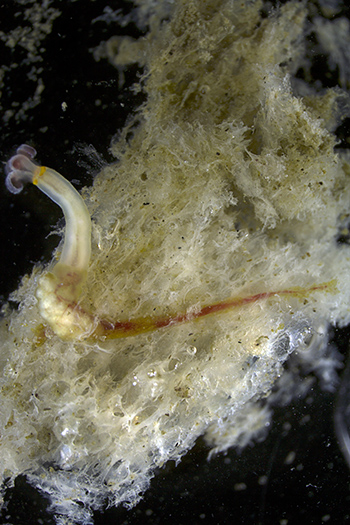 A female Osedax with an exposed 'root' system, which secretes acid to penetrate into the bone. Credit: Greg Rouse

“The acid presumably allows the worms to release and absorb collagen and lipids that are trapped in bone,” said Tresguerres. “This model is remarkably similar to how mammals repair and remodel bone, however Osedax secrete acid to dissolve foreign bone and access nutrients.”

In their report, the scientists describe a process in which the worms use a “proton pump” to secrete acid onto the bone. Tresguerres says similar acid-secreting enzymes exist in all other organisms, such as in human kidneys to handle blood and urine functions.

Because they lack mouths, bone worms must use an alternative method of consuming nutrients from whale bones. Bacteria that live symbiotically within the worms are involved in this process, however, the exact mechanism is not yet fully understood. Some evidence suggests that the symbiotic bacteria metabolize bone-derived collagen into other diverse organic compounds, and that the worms subsequently digest the bacteria for their own nutrition.

“The Osedax symbiosis shows that nutrition is even more diverse than we imagined and our results are one step closer in untangling the special relationship between the worm and its bacteria,” said Katz, a Scripps postdoctoral researcher.

A 2011 study led by Rouse found that bone worms have primarily been found attached to whale skeletons, but they are capable of making a living on other bones as well, including fish (http://scrippsnews.ucsd.edu/Releases/?releaseID=1153). That finding supported a hypothesis that Osedax’s bone-eating lifestyle may have evolved millions of years ago, even before the dawn of marine mammals. 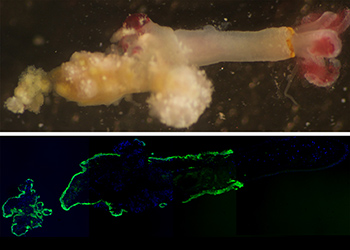 To continue learning more about bone worms, the scientists plan to collaborate with colleagues at the Monterey Bay Aquarium Research Institute in the coming months to collect and study additional bone samples with live worm specimens. They also plan to maintain live Osedax in aquaria at Scripps to study their physiology.

“Determining how Osedax gets into bones was the first challenge in understanding the nutrition of these bizarre animals,” said Rouse. “Now we’d like to understand how they transport and utilize the nutrients that they have uncovered.”