Intensive 10-week research program attracts undergraduates from across the country 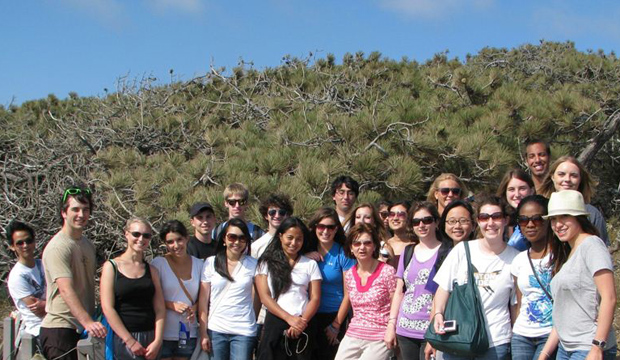 Hundreds of undergraduates from across the country apply each year to attend the prestigious Amgen Scholars Program at UC San Diego.

Leandro Gallo, a graduate student in the department of chemistry and biochemistry at the University of California, San Diego, grew up in a working class family in Brazil where the possibility of pursuing higher education seemed an impossible dream for him. At age 19, Gallo left his native country to escape from life-threatening persecutions for being gay, and was eventually granted political asylum in the United States. With the help and encouragement of friends, he worked to achieve his bachelor’s degree in biological sciences from Hunter College in New York. While an undergraduate student, Gallo discovered UC San Diego through the Amgen Scholars Program—an opportunity that put him on track to pursue a graduate degree in chemical biology, with plans for a career in academic teaching and research.

For five decades, private sector corporations and organizations like the Amgen Foundation have been instrumental to the rapid growth and upward trajectory of UC San Diego. From research to academic programs, scholarships to faculty chairs, UC San Diego values the support its generous partners have provided the campus.

“A cornerstone of our university’s excellence is the partnerships we have created,” said Keith York, senior director of development and head of UC San Diego’s Office of Corporate and Foundation Relations. “Our milestone 50th anniversary served as a catalyst for building deeper relationships with the greater San Diego community, and with sponsors of specific campus programs.”

To recognize the important role that UC San Diego’s corporate partners play, York encourages campus community members to take time on February 27, International Corporate Philanthropy Day, to reach out and share their appreciation to the many and varied partners that make their work possible.

“Together, we will continue to build and nurture a culture of corporate partnerships that will be vital to UC San Diego’s continued growth,” added York.

Originally launched in 2006 with a four-year $1 million grant from the Amgen Foundation, the Amgen Scholars Program is an intensive 10-week residential program at UC San Diego that provides hands-on laboratory experience for undergraduates from across the country. In addition to working in a lab, students participate in Graduate Record Examinations (GRE) preparatory classes as well as seminars and discussions about graduate school and the application process—a rigorous combination of training designed to give students a competitive edge for graduate school. In 2010, the Amgen Foundation awarded UC San Diego an additional $1 million to continue the program for the next four years. 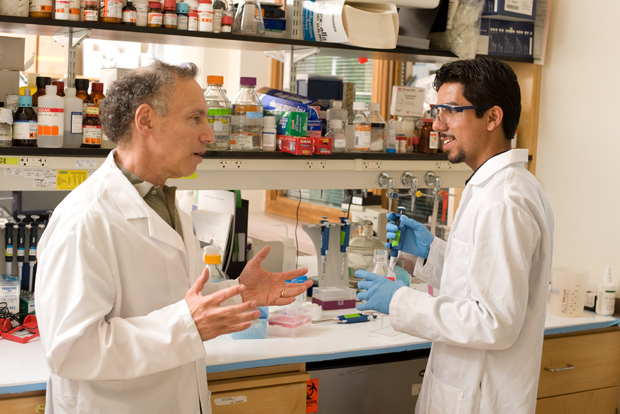 During the 10-week program, students experience what it is like to be a full-time researcher by working in the lab alongside esteemed scientists.

“The most valuable part of my experience with the Amgen Scholars Program was that it opened the opportunity for me to pursue my doctorate degree in chemical biology. It was through this prestigious summer program that I had the chance to explore a career in scientific research and to become familiar with the department of chemistry and biochemistry at UC San Diego,” said Gallo. “Before attending the Amgen Scholars Program, I didn’t know that a doctorate degree was possible for me. I now feel equipped to achieve this goal, in part, due to the mentorship, training and research experience I received as an Amgen Scholars student.”

Today, Gallo is studying growth and inflammatory signaling pathways in cells, a research area that has potential applications for arthritis, cancer, asthma and many other conditions related to inflammation. He plans to eventually become a professor to teach and run a research group in a university setting.

Admission to the Amgen Scholars Program is highly competitive, with roughly 500 students applying for 30 spaces each year. Half of the undergraduates selected come from UC San Diego and the rest from prestigious universities across the nation.

“One of the remarkable features of the Amgen Scholars Program is that it brings students to our campus from the East Coast, Southeast and all over the country,” said David Artis, UC San Diego’s dean of Undergraduate Research Initiatives. “It draws people from places where we don’t typically get UC San Diego students. It’s a great way to expand the reach of the university.”

In addition to Gallo, nearly 30 alumni of the Amgen Scholars Program are currently in graduate programs at UC San Diego, including: 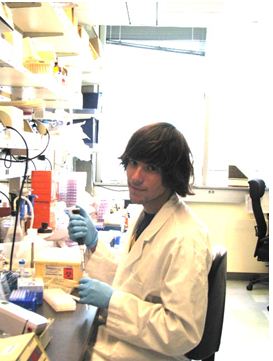 The Amgen Scholars Program helps prepare students to pursue graduate degrees in the sciences, as well as expose students to research careers in the academic setting.

The Amgen Scholars Program is a $27.5 million international initiative that supports undergraduate research at 13 leading U.S. universities, including UC San Diego, and three institutions in Europe. Today, more than 70 percent of program alumni who have graduated from college are pursuing an advanced degree or a career in science or engineering, with many in scientific Ph.D. programs at top universities around the world.

At UC San Diego, the Amgen Scholars Program is managed by the university’s Academic Enrichment Program (AEP), which oversees a network of enrichment initiatives that give undergraduate students the opportunity for hands-on research experience in a number of subjects, from science, math and engineering to social sciences and the arts and humanities. In addition, AEP makes a special effort to support low-income and ethnically underrepresented students in preparation for graduate school and academic careers.

Private support is needed to ensure that UC San Diego undergraduate and graduate students continue to gain valuable research experience. Scholarships and fellowships help bridge the gap between college expenses and financial aid, allowing students to take advantage of opportunities outside the classroom and inside the lab. To learn more about supporting UC San Diego students, visit www.InventTheFuture.ucsd.edu.