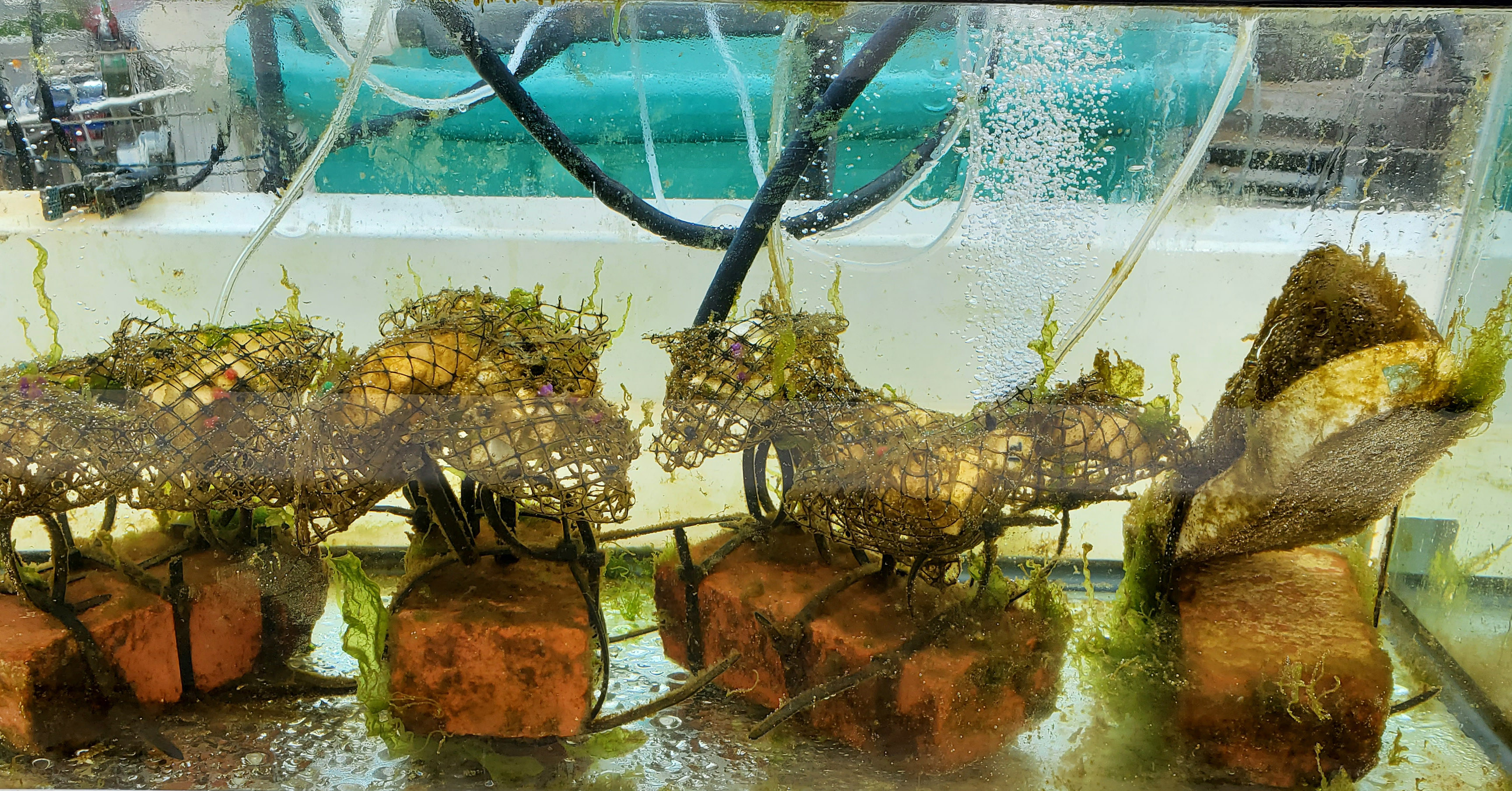 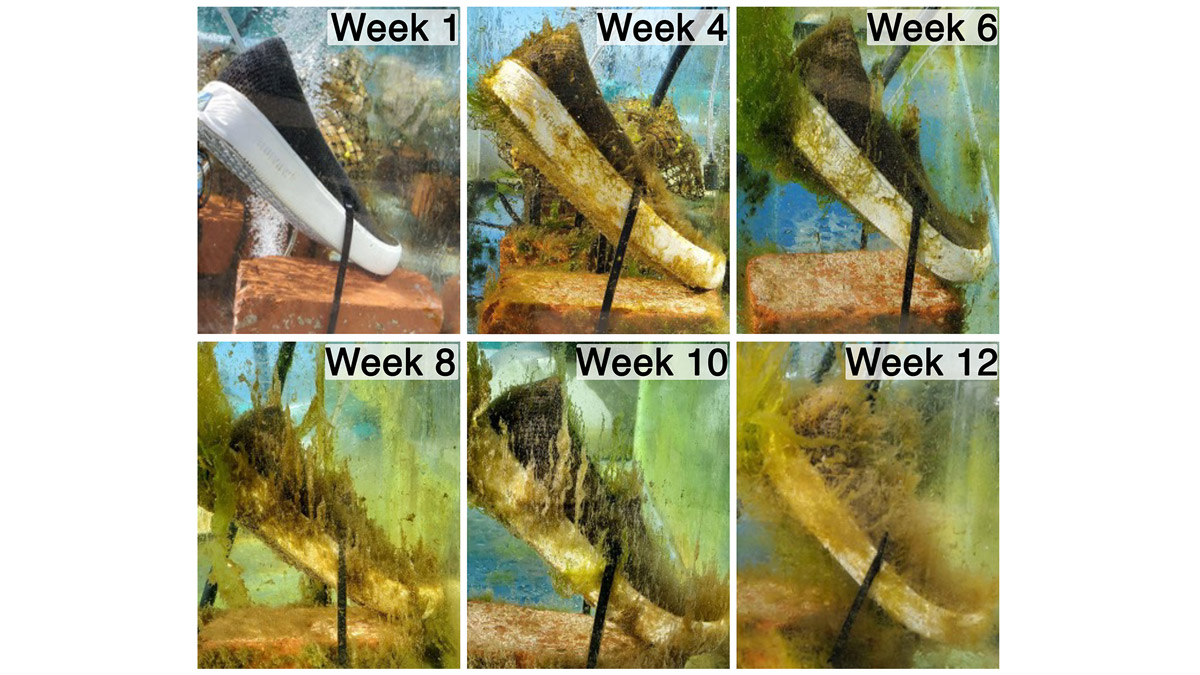 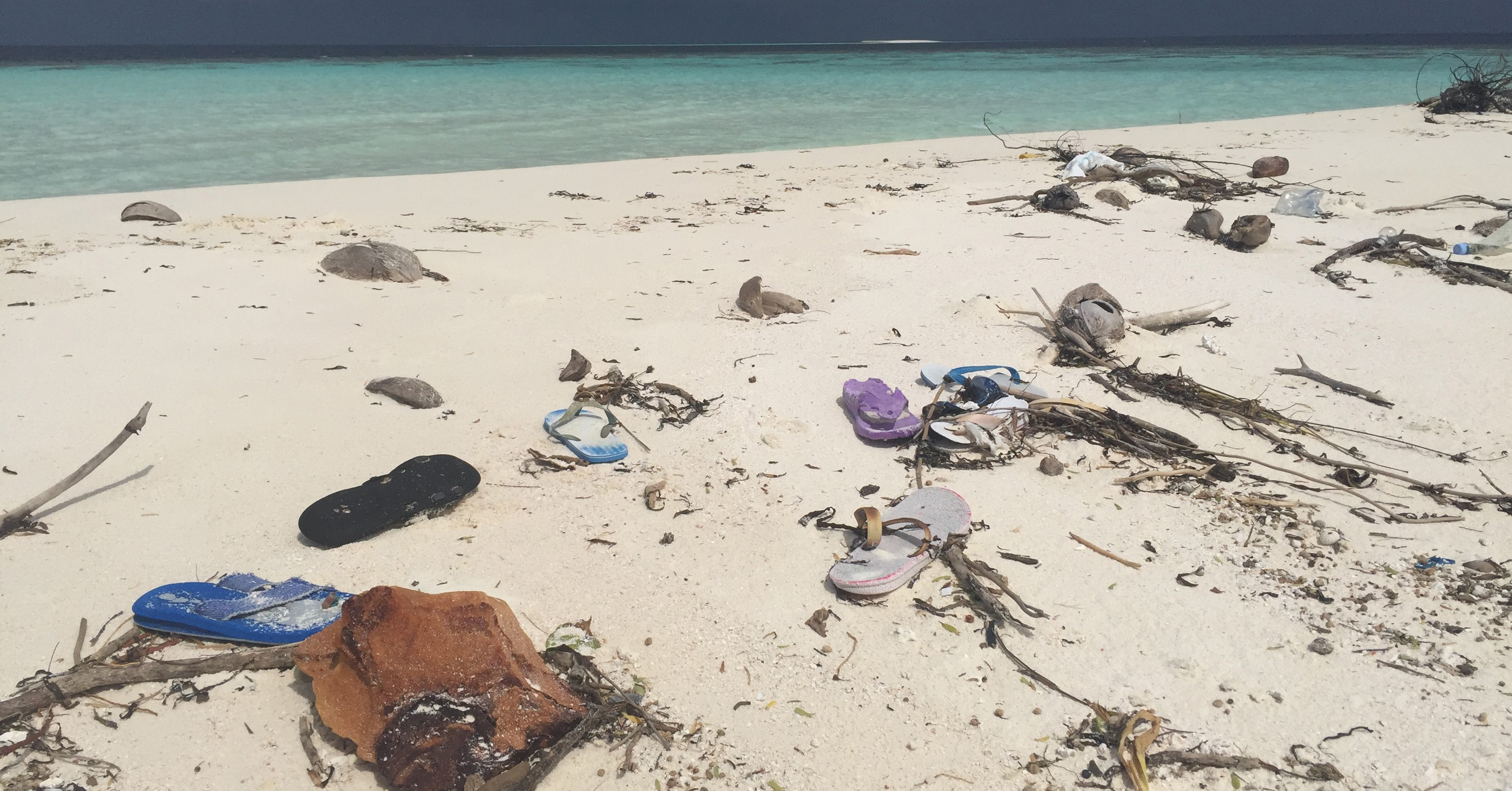 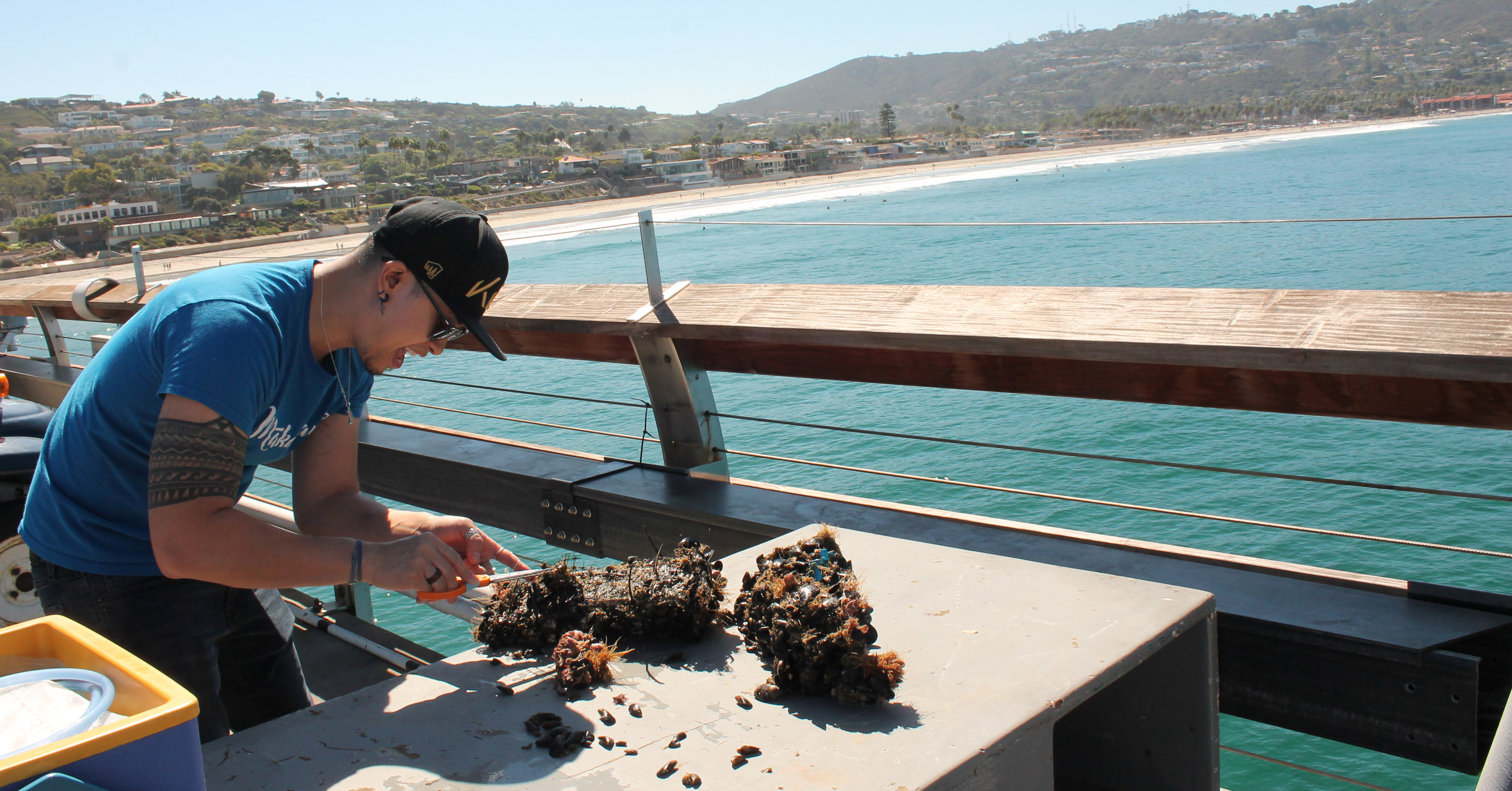 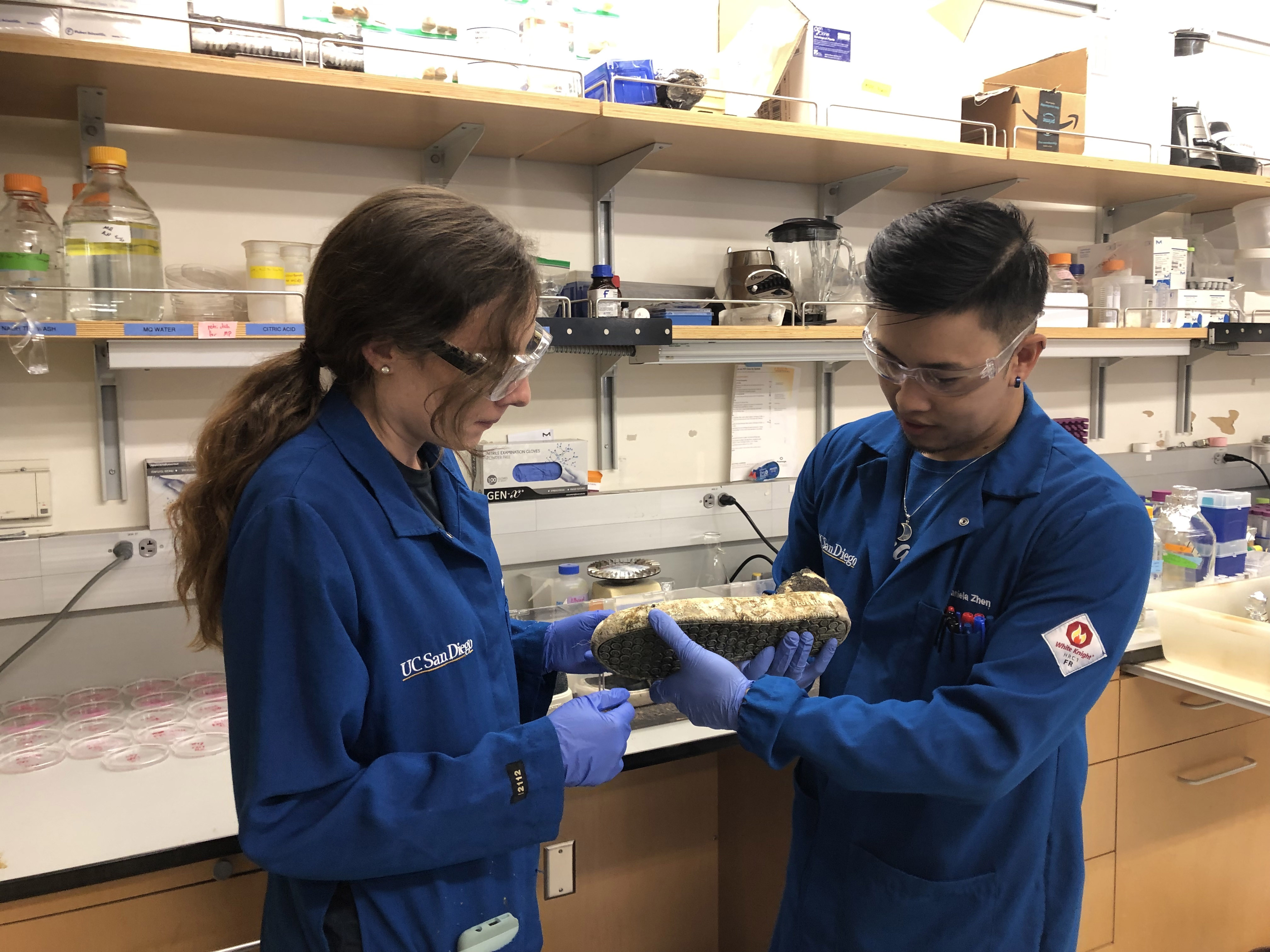 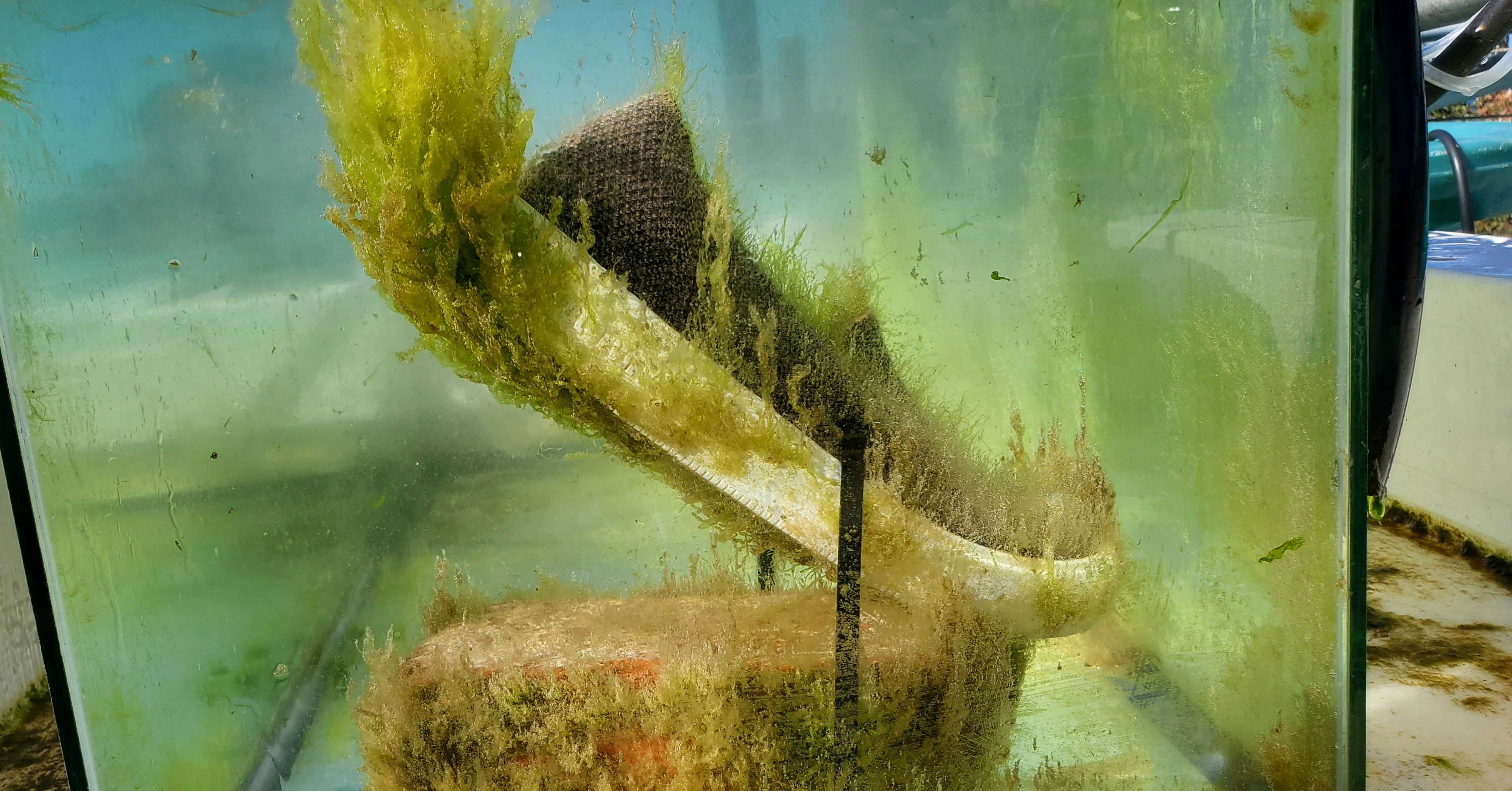 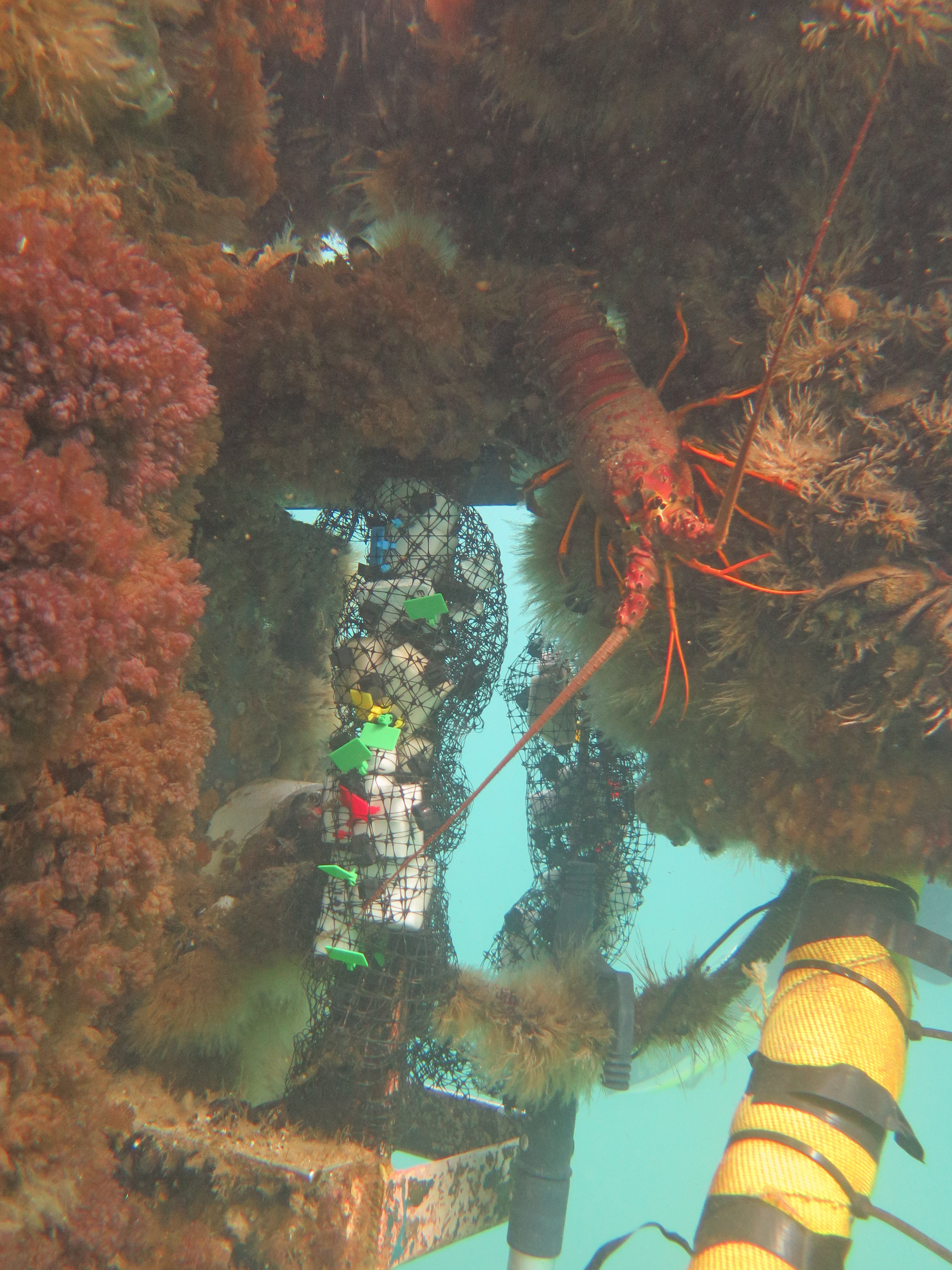 A sustainable Blueview shoe is shown biodegrading in seawater after being submerged for 12 weeks. Credit: Daniel Zhen, Algenesis Inc.

Even a small uninhabited island in the Maldives is marked with human pollution. The flip-flops on this Indian Ocean beach likely came from India or China, more than 1,000 miles away. Credit: Stephen Mayfield

Plastics, now ubiquitous in the modern world, have become a rising threat to human and environmental health. Around the planet, evidence of plastic pollution stretches from grocery bags in the deep sea to microplastics in our food supplies and even in our blood.

Seeking solutions to counteract the rise in plastic trash, scientists at the University of California San Diego have developed new biodegradable materials that are designed to replace conventionally used plastic. After proving their polyurethane foams biodegrade in land-based composts, an interdisciplinary team of scientists including UC San Diego biologist Stephen Mayfield and chemists Michael Burkart and Robert “Skip” Pomeroy have now shown that the material biodegrades in seawater. The results are published in the journal Science of the Total Environment.

The researchers are working to address a plastic pollution problem now described as a global environmental crisis. In 2010, researchers estimated that 8 billion kilograms of plastic enter the ocean in a single year, with a steep escalation predicted by 2025. Upon entering the ocean, plastic waste disrupts marine ecosystems, migrates to central locations and forms trash gyres such as the Great Pacific Garbage Patch, which covers an area more than 1.6 million square kilometers. These plastics never degrade, but rather break up into ever-smaller particles, eventually becoming microplastics that persist in the environment for centuries.

Working with study coauthor Samantha Clements, a marine biologist and scientific diver at Scripps Institution of Oceanography, the UC San Diego researchers conducted a series of tests of their biodegradable polyurethane materials—currently used as foams in the first commercially available biodegradable shoes (sold by a spinoff company called Blueview)—at Scripps’ Ellen Browning Scripps Memorial Pier and Experimental Aquarium. The pier’s location provided scientists the access and a unique opportunity to test materials in the natural nearshore ecosystem, which is the exact environment where rogue plastics are most likely to end up.

The team found that an assortment of marine organisms colonizes on the polyurethane foam and biodegrades the material back to their starting chemicals, which are consumed as nutrients by these microorganisms, in the ocean environment. Data from the study suggest that the microorganisms, a mix of bacteria and fungi, live throughout the natural marine environment.

“Improper disposal of plastic in the ocean breaks down into microplastics and has become an enormous environmental problem,” said Mayfield, a professor in the School of Biological Sciences and director of the California Center for Algae Biotechnology. “We’ve shown that it’s absolutely possible to make high performance plastic products that also can degrade in the ocean. Plastics should not be going into the ocean in the first place, but if they do, this material becomes food for microorganisms and not plastic trash and microplastics that harm aquatic life.”

Shoes, including flip-flops, the world’s most popular shoe, make up a large percentage of plastic waste that ends up in the world’s oceans and landfills. To fully test and analyze their polyurethane materials, developed at UC San Diego over the last eight years, the study joined experts in biology, polymer and synthetic chemistry and marine science. Foam samples were exposed to tidal and wave dynamics and tracked for molecular and physical changes using Fourier-transform infrared spectroscopy and scanning electron microscopy. The results showed that the material started to degraded in as little as four weeks. The researchers then identified microorganisms from six marine sites around San Diego that are capable of breaking down and consuming the polyurethane material.

“No single discipline can address these universal environmental problems but we’ve developed an integrated solution that works on land—and now we know also biodegrades in the ocean,” said Mayfield. “I was surprised to see just how many organisms colonize on these foams in the ocean. It becomes something like a microbial reef.”

Competing interest note: Burkart, Mayfield and Pomeroy are founders of and hold equity interests in Algenesis Inc., a company that could benefit from this research. Also, Gunawan, Tessman, Zhen, Johnson and Simkovsky are employees and shareholders of Algenesis.