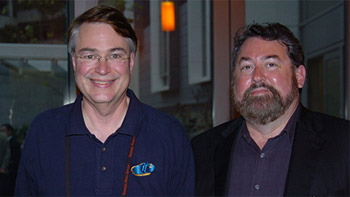 Innovation is now the driving force of the global economy and the intellectual property (IP) which results drives wealth creation in companies, economic sectors, and countries. So what can universities and other public institutions do to turn innovations into IP and to protect that IP so that it generates future jobs for the U.S. economy?

That’s one of the fundamental questions to be addressed on Thursday, March 13 at the University of California, San Diego in a workshop on “The Growing Value of Innovation & Intellectual Property as Drivers of the Global Economy.” The meeting – which is open to the public but registration required at the workshop website – is organized by the California Institute for Telecommunications and Information Technology (Calit2) and the Inventing Nations vs. Nation-sponsored Theft of IP (INVNT/IP) Global Consortium.

“Calit2 has a long-term interest in pulling together the academic and private sectors to create environments which encourage innovation,” said Calit2 Director Larry Smarr. “A major part of that environment must be an effort to define and safeguard intellectual property which emerges from innovation. This is a kickoff meeting of a multi-year Calit2 program with our campus and private sector partners to pursue best practices in the creation and protection of IP coming out of UC San Diego labs.”

The workshop is the first held by INVNT/IP (pronounced invent-I-P) on a university campus, after extensive prior interactions with large corporations and international policymakers. INVNT/IP was established in 2011 by the Strategic News Service (SNS), after a lengthy study of nation-state business models that rely heavily on the theft of IP.

“It’s about the Big Shift in the global economy, as we move from an era when inventions paid off to an era when copying and theft makes more money,” wrote INVNT/IP founder Mark Anderson in an SNS article republished by Forbes magazine in August 2013. “Is it possible that we are not running out of great inventors, but rather, the business models to enable them?”

Anderson, a long-time member of Calit2’s Advisory Board, recently invited Calit2’s Smarr to join the INVNT/IP Advisory Board, and the two will co-chair the March 13 workshop in the Qualcomm Institute, the UC San Diego division of Calit2 (the other division is at UC Irvine).

Prior to the afternoon workshop, Calit2 is holding meetings with UC San Diego faculty from the three campus units that are co-sponsoring the event: the Rady School of Management, School of International Relations and Pacific Studies (IR/PS), and Jacobs School of Engineering.  The morning meetings will focus on ways for the three schools to enhance academic research into the broad issues related to the growing role of innovation leading to the creation and transfer of IP in the global economy.

Smarr, who is also a professor of computer science and engineering in the Jacobs School, said “the university plays a critical role in the creation of IP, but there are many people in the private sector who don’t necessarily know how an innovation goes from being an idea in a professor’s lab to being a formal piece of intellectual property – and how the university decides which innovations to back. We hope this meeting will shed some light on this process and how the valuable IP can be protected.”

Smarr will open the workshop, followed by INVNT/IP’s Mark Anderson, who will provide a short talk on the challenges that INVNT/IP was created to overcome. In his framing talk, Anderson will explore global business models, a new theory of Flow Economics, and how the flow of IP around the world will determine tomorrow’s winners and losers. “If you think of innovation as a supply chain from the research lab to the global marketplace, if that chain is short-circuited because of IP theft, you may lose a future company of great value,” said Anderson. “So we have to understand the scale of the threat facing the $84 trillion of the global economy that is driven by IP.”

Smarr will moderate a following session on “Supporting Intellectual Property Creation in San Diego.” Speakers will include Jacobs School of Engineering Dean Al Pisano, who is in a unique position to talk about creating an environment that both generates and protects IP, after having created nearly a dozen companies out of his lab at UC Berkeley before joining the Jacobs School in 2013. Others on the panel will be: Rory Moore, who leads EvoNexus, one of the most successful incubators in San Diego; and Ruprecht von Buttlar, VP of Business Creation and Development at CONNECT, who leads its Springboard business-creation program.

After the sessions on approaches to IP creation and protection at the regional and university levels, the final panel will delve into “How Wealth Is Created by the Invention and Protection of Intellectual Property.” Moderated by Bruce Bigelow, San Diego editor of Xconomy (the workshop’s media sponsor), the session will explore the legal and regulatory environment facing technology companies. Attendees will hear from David Titus, President of the San Diego Venture Group (which represents the growing venture-capital community in the region), and representatives from local, IP-based companies.

INVNT/IP boasts members including some of the top technology companies in the world and its Global Network includes cabinet-level policymakers in the U.S., Australia, the U.K. and much of the European Union.