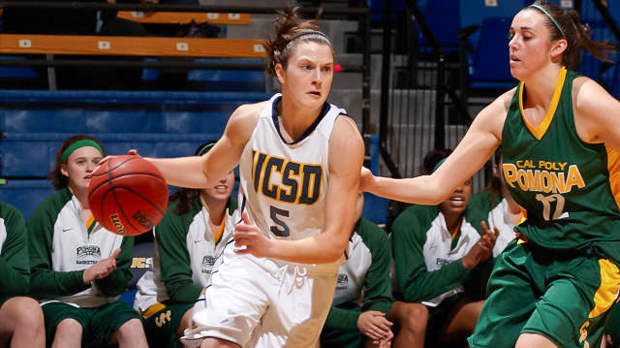 Osga led all scorers with 19 points and Feder finished with 14 for the Tritons, who outscored the Toros 33-8 during a decisive stretch in the first half and went on to claim season victory No. 22 with ease. The duo did most of their damage early as UCSD built a 25-point lead and cruised home from there.

UC San Diego improves to 22-0 overall and 16-0 in CCAA, sweeping the season series with Cal State Dominguez Hills. The last place Toros fall to 3-20 on the year and 2-14 in the conference standings following their eighth loss in nine games.

The Tritons have defeated the Toros 17 straight times dating back to the 2004-05 season.

After shooting just 38% in Friday's 78-63 win over Cal State L.A., UCSD was much sharper on Saturday, finishing better than 47% from the floor. The Tritons matched their season-high in three-pointers made, finishing 11-of-23 from behind the arc, 48%.

Osga was 7-of-10 from the field and hit 3-of-4 from downtown, while Feder converted 4-of-6 and finished a perfect 4-for-4 on threes. While the pair accounted for the bulk of the Tritons' scoring, they had a lot of help as all 14 players that got into the game for UCSD scored.

Porcha Davis scored 15 points and grabbed six rebounds for the Toros, who shot 33% (17-51) from the field. Ella Rodriguez scored 10.

Trailing 8-5 with 14:38 remaining in the first half, UCSD scored 20 unanswered points over the next five minutes to take a commanding 25-8 advantage and assume control. Feder and Osga combined to score 18 of the Tritons' 20 points during the stretch, hitting four threes to open things up for the UCSD offense.

The Toros scored the next seven to close within 10 at 25-15, but the Tritons rattled off another big run, outscoring Dominguez 13-1 over the next two and a half minutes to extend their lead to 38-16. A triple by Natalie Luzar gave UCSD a 43-18 cushion with three minutes left in the period, before CSUDH pulled to within 21 at 44-23 at the break.

UCSD continued to pour it on in the second stanza, extending its lead to 50-26 on a layup by Chelsea Carlisle three and a half minute into the period. A bucket by Megan Perry made it 62-37 five and a half minutes later and Stephanie Yano scored to give the Tritons their biggest lead of the evening at 68-41 with 8:15 remaining.

Carlisle finished with nine points and a game-high six assists for UCSD, while Lauren Freidenberg tallied eight points and six boards. The Tritons outscored the Toros 20-14 in the paint and held a 25-16 edge in bench scoring.

UC San Diego returns to the court next week when Chico State and Cal State Stanislaus come to town on Friday and Saturday. The Tritons defeated both squads on the road in early January.