Why Omega-3 Oils Help at the Cellular Level 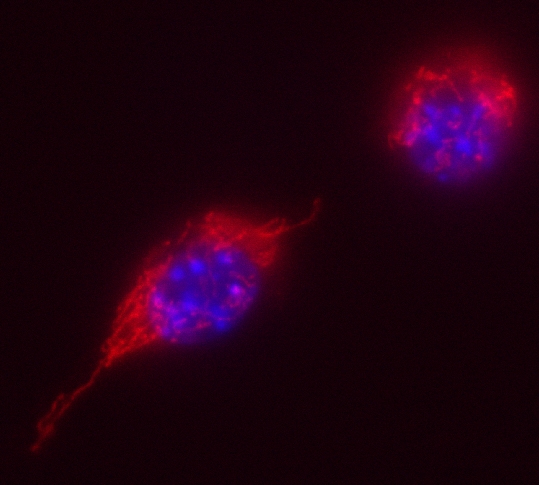 For the first time, researchers at the University of California, San Diego have peered inside a living mouse cell and mapped the processes that power the celebrated health benefits of omega-3 fatty acids. More profoundly, they say their findings suggest it may be possible to manipulate these processes to short-circuit inflammation before it begins, or at least help to resolve inflammation before it becomes detrimental.

The work is published in the May 14, 2012 online Early Edition of the Proceedings of the National Academy of Sciences.

The therapeutic benefits of omega-3 fatty acids, which are abundant in certain fish oils, have long been known, dating back to at least the 1950s, when cod liver oil was found to be effective in treating ailments like eczema and arthritis.  In the 1980s, scientists reported that Eskimos eating a fish-rich diet enjoyed better coronary health than counterparts consuming mainland foods.

“There have been tons of epidemiological studies linking health benefits to omega-3 oils, but not a lot of deep science,” said Edward A. Dennis, PhD, distinguished professor of pharmacology, chemistry and biochemistry. “This is the first comprehensive study of what fish oils actually do inside a cell.”

In high levels, fatty acids are toxic, so cells typically sequester them as phospholipids in their membranes. When stimulated, however, the fatty acids may be released, provoking a cascading inflammatory response. Acute or limited inflammation is, of course, a vital immunological response to physical damage or invasive pathogens. But chronic inflammation is harmful and a common element of almost every disease, from diabetes to cancer.

After supplementing the mouse macrophages with fatty acids, the scientists stimulated them to produce an inflammatory response. They discovered that omega-3 fatty acids inhibit an enzyme called cyclooxygenase (COX), which produces the prostaglandin hormones that spark inflammation. The action is similar to what happens when one takes an aspirin, which disrupts the COX-2 signaling pathway, thus reducing inflammation and pain.

On the other hand, Dennis and co-author Paul C. Norris, a graduate student in the chemistry and biochemistry department and the molecular pharmacology training program, discovered that omega-3 oils do not inhibit another group of enzymes called lipoxygenases (LOX), which are also produced by stimulated macrophages. One type of generated LOX enzyme in turn produces fat-signaling molecules called leukotrienes, which are pro-inflammatory. But Norris noted that LOX enzymes may also generate anti-inflammatory compounds called resolvins from EPA and DHA.

These observations, he said, are also helpful in identifying potential adverse effects from taking fish oil. Since omega-3 fatty acids possess overlapping functions with COX inhibitor drugs, with well-known side effects, using both in combination can produce unexpected consequences.

It is this parsing of what’s happening inside cells that Dennis called “ground-breaking.”

“We’ve been able to look inside a cell, see what fish oils do and determine that the process of inflammation at this level may be manipulatable,” he said. “Now, we need to learn if we can fine-tune that process so we can use omega-3 oils to reduce the production of pro-inflammatory prostaglandins and boost the production of anti-inflammatory resolvins.”