When he wrote “2001: A Space Odyssey” 45 years ago, Arthur C. Clarke offered extraordinary visions of the future—including HAL, the artificially intelligent computer—that continue to provide insight into the human condition. But in 1968 even Clarke couldn’t have envisioned that a top-ranked U.S. research university would continue his legacy by focusing on his greatest gift: imagination. That reality will be celebrated this month with a series of free events marking the public launch of the Arthur C. Clarke Center for Human Imagination on the UC San Diego campus.

UC San Diego’s Clarke Center will honor the late author and innovator through activities that will focus on cultural, scientific and medical transformations that can occur as we increase our understanding of the phenomena of imagination and become more effective at harnessing and incorporating our imaginations in our research and daily lives.

"We are pleased to create the first and only Arthur C. Clarke Center for Human Imagination,” said UC San Diego Chancellor Pradeep K. Khosla. “At UC San Diego, innovation plays an integral role in our education and research, so our campus is ideally suited to launch and grow a major center to better understand, enhance and enact the gift of human imagination.”

Established by an agreement between UC San Diego and the Arthur C. Clarke Foundation, the center’s initiatives will span a wide range of disciplines and collaborations among institutions and individuals and across communities and continents to help understand the nature of imagination and to build tools and develop methods that will extend imagination. UC San Diego’s Sheldon Brown, professor of computing in the arts in the department of visual arts, is the director of the center. The center’s associate director is David Kirsh, professor and former chair of the department of cognitive science. 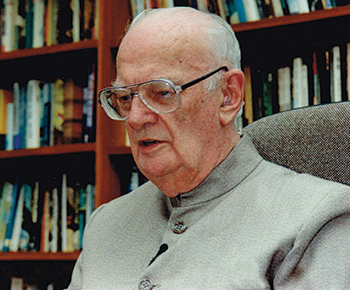 “When I saw that the Clarke Foundation was looking to establish a Center for Human Imagination, I knew that UC San Diego would be uniquely qualified to take this on,” said Brown. “In our proposal for the center, we brought together connections from all divisions of the campus to show how the subject of imagination could be pursued through an engagement of the arts, literature, sciences, medicine and technology.”

Joseph N. Pelton, vice chairman of the Arthur C. Clarke Foundation, added, “It was 30 years ago, in April 1983, that the formation of the Arthur C. Clarke Foundation of the United States was first publicly announced. There could be no more fitting way to celebrate the 30th year of the foundation as it has grown and developed into an international entity than to see the opening of the new and exciting Clarke Center for Human Imagination at the University of California, San Diego.”

Britain’s Sir Arthur C. Clarke, celebrated for his multi-disciplinary legacy in science and engineering, is also considered one of the most inspiring and engaging science fiction writers of all time for such classics as “Childhood’s End,” “Rendezvous with Rama” as well as “2001: A Space Odyssey.” His visionary books and papers have fueled the imagination and avocations of young and old for more than six decades.

Clarke once said, “The only way of discovering the limits of the possible is to venture a little way past them into the impossible.” In addition to drawing upon a wide range of disciplines and collaborations, the Clarke Center will engage the creative worlds of media, the arts and literature to help with discovery. UC San Diego’s unique relationship with speculative fiction and science fiction authors, including Kim Stanley Robinson, David Brin, Nancy Holder, Greg Benford, Vernor Vinge, Greg Bear and Aimee Bender, will allow the center to dismantle traditional boundaries and forge new ways of thinking about the future.

Many of these individuals will be at the free events, noted below, to commemorate the public launch of the Clarke Center. Learn more at http://imagination.ucsd.edu.

Private support will help the Clarke Center for Human Imagination make a transformational impact on new research directions, creative partnerships and collaborations, and educational practices for the 21st century. To support Sir Arthur C. Clarke’s greatest gift—imagination—visit the Clarke Center website at imagination.ucsd.edu, and click the ‘SUPPORT THE CENTER’ button, or contact Carol Hobson at (858) 822-0619 or chobson@ucsd.edu.