Celebrated speakers of the University of California, San Diego’s commencement series, including comedian Lewis Black, San Diego City Council member Sherri Lightner, former White House doctor Connie Mariano and former president of the 10 campus University of California system Richard Atkinson, will give the keynote address to 8,085 graduating students this June. The majority of UC San Diego’s 11 commencement ceremonies will take place June 14-16, preceded by the Skaggs School of Pharmacy and Pharmaceutical Sciences May 18 and the School of Medicine’s June 2 graduation. 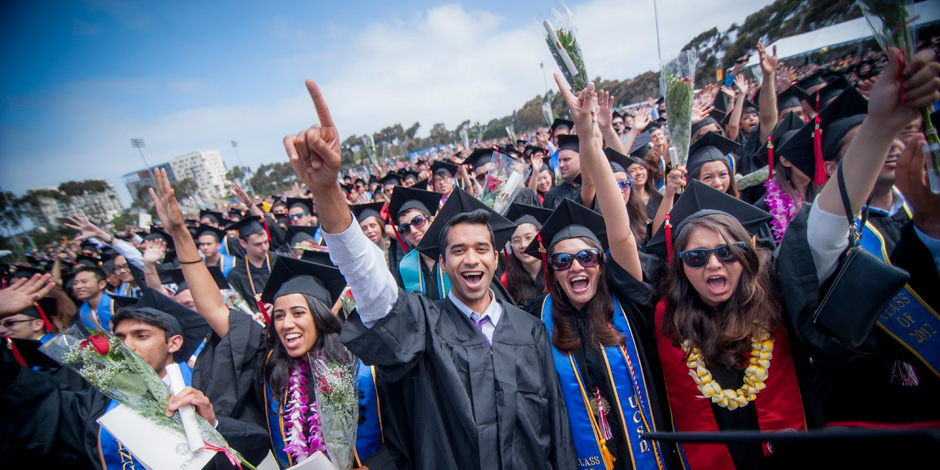 “This is a very exciting and inspiring time as our graduates begin new chapters in their lives,” said Chancellor Pradeep K. Khosla. “I am extremely proud of our new alumni for their hard work and achievements across multiple disciplines. They will undoubtedly go on to be trailblazers in their fields, and they will carry on UC San Diego’s legacy of innovation.”

The first of UC San Diego’s commencement ceremonies was held by the Skaggs School of Pharmacy and Pharmaceutical Sciences at 10 a.m., Saturday, May 18 at the Price Center Ballroom where 59 student graduates received their Pharm.D degrees. The keynote speaker was Paul Abramowitz, Pharm.D, who is the chief executive officer for the American Society of Health-System Pharmacists (ASHP).

At 10 a.m., Sunday, June 2 on the East Lawn between the Medical Teaching Facility and the Stein Research Building, the UC San Diego School of Medicine will confer medical degrees on to 131 graduates––nine will receive both M.D.s and Master’s of Advanced Studies in Clinical Research degrees, and an additional nine will receive joint M.D./Ph.D.s. The keynote speaker is alumna Dr. Connie Mariano, former director of the White House Medical Unit and personal physician to President Bill Clinton. Mariano graduated from UC San Diego’s Revelle College in 1977 and in 1981, she received her medical degree from the Uniformed Services University School of Medicine in Bethesda, Md., the nation’s military medical school.

UC San Diego’s commencement weekend will kick off with the university’s seventh annual All Campus Graduation Celebration at 5 p.m., Friday, June 14. The event is open to graduating undergraduate and graduate students and alumni of UC San Diego. The all-campus event will feature a dinner, fireworks show and keynote speech from university alumnus Robert Buckley, an actor who has appeared on the CW’s “One Tree Hill” and in NBC’s “Lipstick Jungle.” After earning a degree in economics at UC San Diego in 2003, Buckley spent a year and a half working as an economic consultant before he headed to Los Angeles to pursue a career in entertainment.

The first of three ceremonies scheduled for Saturday, June 15 will be held by Thurgood Marshall College at 8 a.m. on RIMAC Field. Some 1,200 graduates and 11,000 guests will gather to hear the commencement speech from Lewis Black, the famed stand-up comic, social critic and guest commentator on “The Daily Show with Jon Stewart” since 1996. Black is best known for his rant-type performances in which he vexingly reports on his perceived absurdities in politics, religion and pop culture. An M.F.A. graduate from Yale University, Black’s first foray into show business was as a playwright. Since then, he has authored three bestselling books and made several HBO solo comedy specials. This is his first university commencement address. “We (comics) act as a filter,” Black said. “I think, after you’ve been bombarded all day, we help you sit back and at least laugh about it for a minute.” 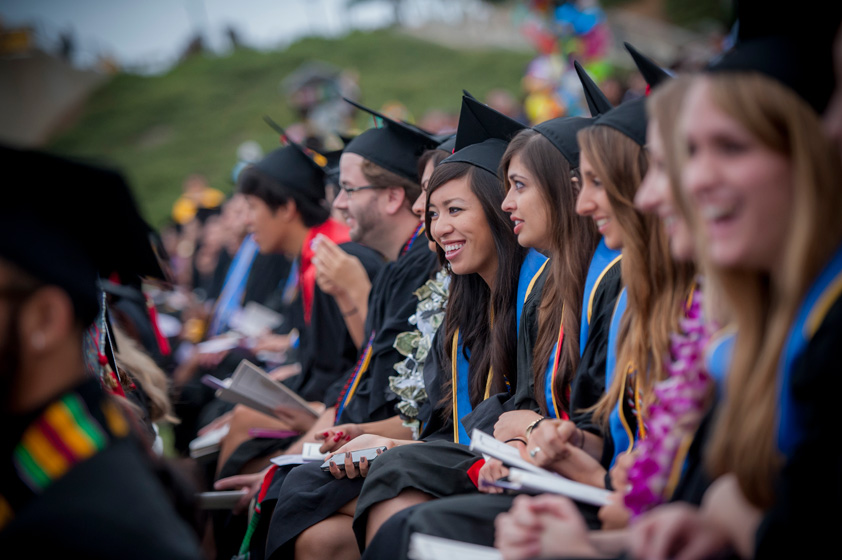 A total of 500 students receiving Ph.Ds. and 1,125 students receiving their master’s degrees will graduate this year. These students and about 2,500 guests will gather at 10:30 a.m. on Saturday, June 15 at the RIMAC Arena for the Office of Graduate Studies commencement ceremony. The keynote speaker is alumna Sherri Lightner, who has served on the San Diego City Council since 2008. Lightner graduated from UC San Diego with bachelor’s degrees in both mathematics and sociology and later with a master’s degree in applied mechanics and engineering sciences.

Sixth College alumnus Sev Ohanian will deliver the keynote speech at 1 p.m., Saturday, June 15 for the 929 Sixth College graduating students and more than 2,000 guests. Ohanian is a filmmaker who served as producer and cinematographer on the 2008 film “My Big Fat Armenian Family” and the 2013 film “Fruitville Station,” which won the Grand Jury Prize and Audience Award at the 2013 Sundance Film Festival.

John Muir College’s ceremony will be held at 5 p.m., June 15 on RIMAC Field. Some 1,200 graduating students and about 10,000 guests will hear keynote speaker Elizabeth Elena Garcia, a graduating senior who will give a speech entitled “Learning to be who we are and love what we do.”

Leading off the commencement ceremonies slated for Sunday, June 16 is Earl Warren College at 8 a.m. with 925 graduates and more than 10,000 guests on RIMAC Field.

The School of International Relations and Pacific Studies (IR/PS) will honor 120 Master of Pacific International Affairs (MPIA), 29 Master of Advanced Studies in International Affairs (MAS-IA) and six Master of International Affairs (MIA) graduates at 10:30 a.m., Sunday, June 16 at RIMAC Arena. The graduating students and more than 800 guests will gather to listen to Bowman Cutter, a senior fellow and director of the Next American Economy Project at the Roosevelt Institute. Cutter held senior economic policy roles during the Clinton and Carter presidencies, and served as leader of the transition team for the Office of Management and Budget following the election of President Barack Obama. Cutter is currently the chairman of the board of CARE, a global development organization, and chairman of the board of Resources for the Future, one of the largest energy and environmental research institutes in the world.

UC San Diego graduating senior Arvin Wali will give the graduation address to 846 graduating students from Revelle College and some 1,700 guests at 1 p.m., June 16 on RIMAC Field. Wali is a senior economics major who also is earning a minor in humanities. He is a former resident advisor, orientation leader, welcome week ambassador and humanities teaching assistant. In addition, Wali is a member of the UCSD Medical Scholars Program and will be starting medical school at UC San Diego in the fall.

On Sunday, June 16, Eleanor Roosevelt College will hold its ceremony with 905 graduates. Graduating senior Jacob Emge will serve as speaker; Emge is receiving a degree in human biology and in the fall, he will be returning to UC San Diego to complete his master's thesis in the lab of Kim Barrett, UC San Diego’s dean of Graduate Studies and professor in the UC San Diego School of Medicine’s Division of Gastroenterology. The Eleanor Roosevelt College ceremony will take place at 5 p.m., Sunday, June 16 on RIMAC field.