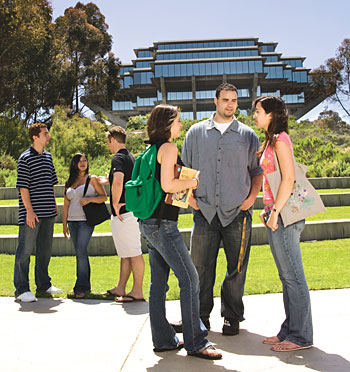 The University of California, San Diego is again named a best value public college, according to Kiplinger’s Personal Finance magazine.

Kiplinger’s ranked UC San Diego 10th in the nation, up from 12th last year, based on cost and financial aid, average student debt, competitiveness, graduation rates and academic support. The list of the top 100 best values in public colleges and universities will appear in the February 2012 issue of the publication.

The Kiplinger’s editors noted, “UC San Diego charges a lower sticker price than its sister schools in our top-ten rankings. Near both the Mexican border and the Pacific Ocean, this top research institution gives students plenty of opportunity for expanding their horizons. And have we mentioned the great weather?”

Recognizing the persistent decline of state funding for many public universities, Kiplinger’s changed its ranking methodology for the 2012 best values in public colleges list. “Given these hard times in higher ed, the word value takes on special resonance,” the publication stated. “We’ve retooled our rankings to give more weight to criteria we consider crucial to academic value.”

California’s budget cuts to UC campuses have resulted in a 57 percent decline in California’s per-student funding over the last two decades. Although the university has been forced to raise fees as a result of state budget cuts, Kiplinger’s Personal Finance consistently ranks UC San Diego a best value university.

In response to California’s current economic climate, UC San Diego launched the $50 million ‘Invent the Future’ (www.inventthefuture.ucsd.edu) student support fundraising campaign that will help fund scholarships and fellowships for all who need them.

Kiplinger’s full list of top schools can be found at http://www.kiplinger.com/.