Biologists at the University of California, San Diego have succeeded in engineering algae to produce potential candidates for a vaccine that would prevent transmission of the parasite that causes malaria, an achievement that could pave the way for the development of an inexpensive way to protect billions of people from one of the world’s most prevalent and debilitating diseases. Initial proof-of-principle experiments suggest that such a vaccine could prevent malaria transmission.

Malaria is a mosquito-borne disease caused by infection with protozoan parasites from the genus Plasmodium. It affects more than 225 million people worldwide in tropical and subtropical regions, resulting in fever, headaches and in severe cases coma and death. While a variety of often costly antimalarial medications are available to travelers in those regions to protect against infections, a vaccine offering a high level of protection from the disease does not yet exist.

The use of algae to produce malaria proteins that elicited antibodies against Plasmodium falciparum in laboratory mice and prevented malaria transmission was published today in the online, open-access journal PLoS ONE. The development resulted from an unusual interdisciplinary collaboration between two groups  of biologists at UC San Diego—one from the Division of Biological Sciences and San Diego Center for Algae Biotechnology, which had been engineering algae to produce bio-products and biofuels, and another from the Center for Tropical Medicine and Emerging Infectious Diseases in the School of Medicine that is working to develop ways to diagnose, prevent and treat malaria. 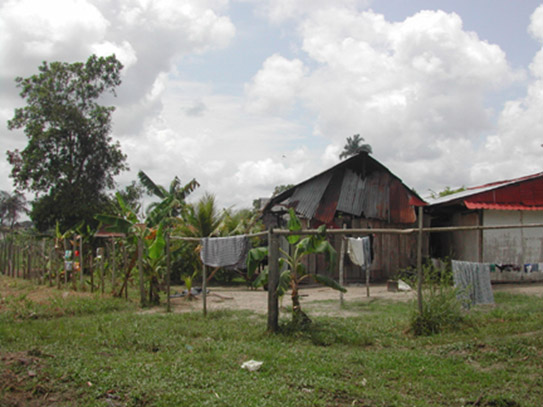 A house in a malaria-endemic region of the Peruvian Amazon. Credit: Joseph Vinetz

Part of the difficulty in creating a vaccine against malaria is that it requires a system that can produce complex, three-dimensional proteins that resemble those made by the parasite, thus eliciting antibodies that disrupt malaria transmission. Most vaccines created by engineered bacteria are relatively simple proteins that stimulate the body’s immune system to produce antibodies against bacterial invaders. More complex proteins can be produced, but this requires an expensive process using mammalian cell cultures, and the proteins those cells produce are coated with sugars due to a chemical process called glycosylation.

“Malaria is caused by a parasite that makes complex proteins, but for whatever reason this parasite doesn’t put sugars on those proteins,” said Stephen Mayfield, a professor of biology at UC San Diego who headed the research effort. “If you have a protein covered with sugars and you inject it into somebody as a vaccine, the tendency is to make antibodies against the sugars, not the amino acid backbone of the protein from the invading organism you want to inhibit. Researchers have made vaccines without these sugars in bacteria and then tried to refold them into the correct three-dimensional configuration, but that’s an expensive proposition and it doesn’t work very well.”

Instead, the biologists looked to produce their proteins with the help of an edible green alga, Chlamydomonas reinhardtii, used widely in research laboratories as a genetic model organism, much like the fruit fly Drosophila and the bacterium E. coli. Two years ago, a UC San Diego team of biologists headed by Mayfield, who is also the director of the San Diego Center for Algae Biotechnology, a research consortium seeking to develop transportation fuels from algae, published a landmark study demonstrating that many complex human therapeutic proteins, such as monoclonal antibodies and growth hormones, could be produced by Chlamydomonas.

That got James Gregory, a postdoctoral researcher in Mayfield’s laboratory, wondering if a complex protein to protect against the malarial parasite could also be produced by Chlamydomonas.  Two billion people live in regions where malaria is present, making the delivery of a malarial vaccine a costly and logistically difficult proposition, especially when that vaccine is expensive to produce. So the UC San Diego biologists set out to determine if this alga, an organism that can produce complex proteins very cheaply, could produce malaria proteins that would inhibit infections from malaria.

“It’s too costly to vaccinate two billion people using current technologies,” explained Mayfield. “Realistically, the only way a malaria vaccine will ever be used is if it can be produced at a fraction of the cost of current vaccines.  Algae have this potential because you can grow algae any place on the planet in ponds or even in bathtubs.”

Collaborating with Joseph Vinetz, a professor of medicine at UC San Diego and a leading expert in tropical diseases who has been working on developing vaccines against malaria, the researchers showed that the proteins produced by the algae, when injected into laboratory mice, made antibodies that blocked malaria transmission from mosquitoes. 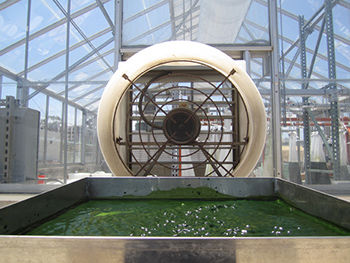 The edible algae Chlamydomonas, seen here at UC San Diego, can be grown in ponds anywhere in the world. Credit: SD-CAB

“It’s hard to say if these proteins are perfect, but the antibodies to our algae-produced protein recognize the native proteins in malaria and, inside the mosquito, block the development of the malaria parasite so that the mosquito can’t transmit the disease,” said Gregory.

“This paper tells us two things: The proteins that we made here are viable vaccine candidates and that we at least have the opportunity to produce enough of this vaccine that we can think about inoculating two billion people,” said Mayfield. “In no other system could you even begin to think about that.”

The scientists, who filed a patent application on their discovery, said the next steps are to see if these algae proteins work to protect humans from malaria and then to determine if they can modifiy the proteins to elicit the same antibody response when the algae are eaten rather than injected.

Other UC San Diego scientists involved in the discovery were Fengwu Li from Vinetz’s laboratory and biologists Lauren Tomosada, Chesa Cox and Aaron Topol from Mayfield’s group. The basic technology that led to the development was supported by the Skaggs family. The research was supported by grants from the National Institute of Allergy and Infectious Diseases and the San Diego Foundation.  The California Energy Commission supported work on recombinant protein production for biofuels use, and this technology helped enabled these studies.