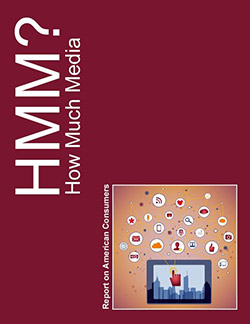 A new study by a researcher at the San Diego Supercomputer Center (SDSC) at the University of California, San Diego, says that by 2015, the sum of media asked for and delivered to consumers on mobile devices and to their homes would take more than 15 hours a day to see or hear. That volume is equal to 6.9 million-million gigabytes of information, or a daily consumption of nine DVDs worth of data per person per day.

So when do we have time to sleep or work if we spend every waking minute being exposed to myriad media?  The answer is that media delivered is not a measure of attention or comprehension of that media.

“One can actually have more than 24 hours in a media day,” explains James E. Short, the author of the latest “How Much Information?” report called “How Much Media? 2013 Report on American Consumers” and produced by the Institute for Communications Technology Management (CTM) at the University of Southern California’s Marshall School of Business. “As we increase the number of simultaneous media streams going into the home, and increase our multi-tasking behaviors, a lot of content assumes the role of background or secondary content streams. And as we increase our level of multi-tasking, we have to expect that total hours will grow even as the total number of physical hours a viewer can consume media will remain roughly constant. Moreover, this increasing level of multi-tasking is creating competition between media streams to be the dominant stream at any one time.”

While such a high rate of multiple-stream media traffic sounds overwhelming, the idea of us suffering sensory overload is not as dire as some may think, says Short, who is also lead scientist for SDSC’s Center for Large-Scale Data Systems Research (CLDS) as well as a CTM Visiting Researcher.

“While machines can always overload us, it’s more a question of, how can we design these systems to produce meaningful value? That’s the critical challenge as we speed further into the age of digitally-based information,” according to Short.

The record level of U.S. media consumption focuses on media consumed in and out of the home, excluding workplace media, between 2008 and 2015. It defines “media” according to 30 categories (e.g. television, social media, computer gaming). Information reported in the study was canvassed from several hundred data sources, including media measurement firms such as Nielsen, Arbitron, ComScore, investor and analyst firms, government sources, and foundation and research publications. Some highlights of the How Much Media? (HMM) report:

The HMM report also includes data on Americans’ media consumption dating back to the 1960s. During those decades, the supply of digital media measured in bytes has grown at compounded rates ranging between 6 and 30 percent each year. Growth in consumptive time, however, has been increasing at compounded rates ranging between 3 to 5 percent each year. The upshot: supply is driven by rapidly advancing device capacities and faster networks. Growth in consumptive time, however, is destined to continue its slow but steady increase. Constrained by human physical limits, including the length of a day, growth in consumptive time will never exceed a few percent per year.