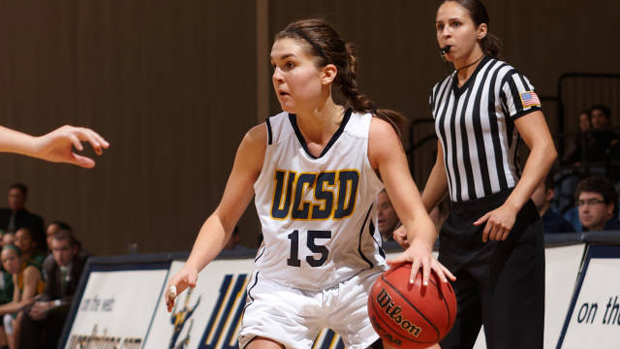 Chelsea Carlisle and the Tritons equaled their win total from last season with their triumph over the Gators on Saturday. Courtesy: Jimmy Gekas/Sideline Studios

The No. 1 UC San Diego women's basketball team collected its 20th consecutive victory on Saturday, defeating San Francisco State, 68-55, in a defensive struggle at The Swamp on the SFSU campus.

Emily Osga scored a game-high 18 points and Chelsea Carlisle finished with 16 to pace the Tritons, who used an outstanding defensive effort to add another win to their impressive streak. UCSD improves to 20-0 overall and 14-0 in California Collegiate Athletic Association play with the win, reaching the 20-win mark for the seventh straight season.

The Tritons have now won 23 of their last 24 CCAA games dating back to the end of last season.

"We were never really in sync tonight offensively, but we still found a way to get the win on the road," head coach Charity Elliott said. "It's always a battle on the road and San Francisco State played really hard. Our defense was the difference for us again tonight."

Nicole Hicks scored 12 points on 5-of-16 shooting to lead San Francisco State, which drops to 6-14 overall and 5-9 in the CCAA with the loss. Lauren Varney finished with 11 points and eight rebounds, while Farrah Shokoor recorded a double-double with 10 points and a game-high 12 boards.

UCSD's defense, which has been just as sharp as its potent offense over the last several games, held SFSU to under 34% shooting for game. The Gators converted just 21-of-62 attempts from the field, including 10-of-32 in the first half as the Tritons built a 12-point halftime lead.

UCSD's opponents have averaged just 55.4 points on 34% shooting over the last five games.

The Tritons gained the upper hand early in this one, as Osga hit a three-pointer and a jumper to put UCSD on top 23-13 with just under 10 minutes remaining in the first half. The Gators scored the next two baskets to cut the deficit to six, but the Tritons answered with six straight of their own to push the lead to 12 at 29-17 with 5:42 left in the period.

Carlisle hit a three at the buzzer to give UCSD a 36-24 advantage heading into the locker room at the break.

UCSD extended its lead to 15 on a jumper by Osga four and a half minutes into the second half, before a 7-0 SFSU run brought the Gators to within 44-36 with 13:28 left to play. The Tritons came right back with a crushing run of their own, however, scoring 10 unanswered over the next three minutes to take their biggest lead of the game at 54-36.

UCSD's lead would not dip below nine points the rest of the way.

UCSD swept the season series with San Francisco State, after winning the first matchup of the year, 79-44, on December 29 at RIMAC Arena. The Tritons have won their previous 19 meetings with the Gators dating back to the 2002-03 season.

The Tritons will now return to La Jolla for their final four home games of the regular season February 3-11. UCSD will begin the four-game home stand next Friday against Cal State L.A. on Spirit Night.