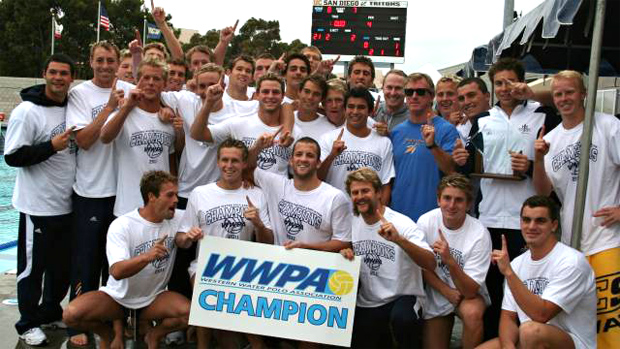 The Tritons saw their three-goal lead heading into the final quarter evaporate as the Aggies pulled even at 7-7 with 3:37 left. The next time down the pool, Josh Stiling won a physical battle in front of the net before punching in the eventual game-winner off a rebound from Graham Saber.

"Water polo is a game of attrition. You've got to be measuring for the whole game how your reserves are and how it's going to play out in the end," said UCSD head coach Denny Harper. "There was certainly concern because Davis was coming on. But, it's how you finish it, and, we certainly had enough to finish it."

Harper has guided the Tritons to every one of their 15 WWPA titles, including three in past ten years.

The winner of the of the conference tournament receives the WWPA's automatic bid to December 4 & 5's NCAA Men's Water Polo Championship, hosted by Cal. The UC San Diego men's water polo team secured the No. 3 seed for the championship. The Tritons will face second-seeded UCLA (23-4) on Saturday at 3 p.m. in the second semifinal. Prior to the UCSD-UCLA game, top-seeded University of Southern California (22-3) will play No. 4 Princeton University (21-9) at 1 p.m.

The winners of each semifinal will play for the NCAA title on Sunday, December 4 at 3 p.m. The third-place game will be played at 1 p.m. All four championship games will be streamed live on NCAA.com.

The Tritons made a habit of making it tough for the Aggies to find the net from outset of the Nov. 20 game. UCSD (17-9) combined for three field blocks on one UCD (22-11) possession and Morton stopped two Aggie penalty shots as the Tritons took a 3-1 lead into the first break.

The squads struggled to score early in the second quarter. Matthew Michalko's backhand careened of the crossbar, then off the back of Aggie goalie Kevin Peat's head, before Peat was able to flick it off the line. UCD's Aaron Salit nearly tipped-in a lob from close range.

Eventually, John Butler increased the Triton lead to 4-1 with 4:25 left by finding the side-netting from seven meters out. Ryan Hagens answered for UCD, but Butler added his second of the game from nearly the identical spot to make it 5-2.

In the second half, David Higginson's burst of speed allowed the freshman to glide past his defender before bouncing a shot inside the left post. The next trip down the pool, Stiling fired a shot from nine meters, pounding it bar-down to give the Tritons their biggest lead of the game at 7-3 with 2:23 left in the third.

Salit scored with a man-advantage out of a timeout and the Aggies nearly pulled within two. After Stiling was excluded after a Triton turnover, a quick restart caught UCSD off-guard and a man-down. Salit got ahead of the pack and was in a prime position to score, but Higginson recovered from the back of the pack to swipe the shot attempt away from the WWPA's leading scorer.

The UCSD attack stalled for the next seven minutes of play, as Salit scored twice and Chris Richardson added a goal to make it 7-6 with 5:37 left. UCD would have another opportunity to score from five meters when Saber collided with an Aggie player after being excluded.

But, UCD would make it 0-for-3 on penalties when Trevor Allen's attempt ricocheted off the woodwork. Still, Richardson pulled UCD even at 7-7, scoring on a deflection with 3:37 to play.

Saber drew an ejection after being mauled in front of the goal by a pair of Aggies, and then drew another ejection eight seconds later when Ryan Hagens pulled him under. Equipped with a two-man advantage, the Tritons tried to catch the Aggie defense off-balance by tossing it around the perimeter.

Finally, Saber took a sharp-angled shot from the left side across goal. It was blocked by a UCD defender, but the ball snuck behind Peat and floated on the goalline. Stiling took advantage of the lack of Aggies crowding the goal mouth, pushing in the ball into the cage between a pair of defenders.

The UCSD defense held steadfast the rest of the way. The Tritons killed their 11th 6-on-5 deficit of the day on UCD's next possession and Morton snuffed-out Collins' final attempt with 18 seconds to play. The Tritons relaxed the clock as Morton tossed it to Donohoe in the corner. Donohoe advanced it to Luke Syka at mid-tank, who flipped it back to Morton as the horn blared.

Morton was named Tournament MVP after recording 32 stops in the Tritons' three games. Saber and Butler joined Morton on the all-tournament first team and Donohoe was named to the second team.

UCD upset four-time defending champion Loyola Marymount and UCSD cruised past Santa Clara in their respective semifinal. LMU is the only other team besides UCSD to win a WWPA crown this millennium.

"I'm happy for these guys," said Harper. "For our players to experience what they're about to experience, it's pretty dog-gone good."