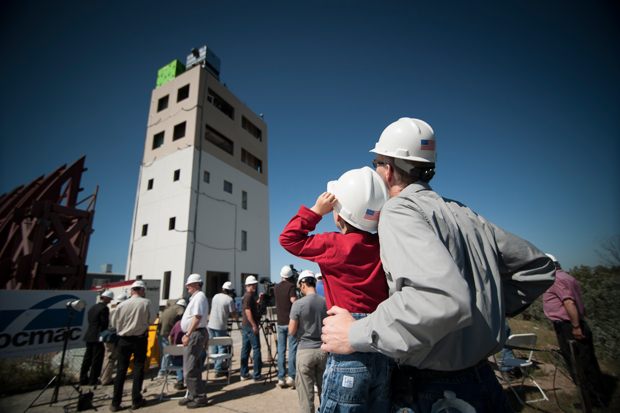 What happens when you put a fully equipped five-story building, which includes two hospital floors, computer servers, fire barriers and even a working elevator, through a series of high-intensity earthquakes?

Structural engineers at the University of California, San Diego began to get some answers last week, when they launched a series of tests conducted on the world’s largest outdoor shake table at the Englekirk Structural Engineering Center.

Preparing for "the Big One"
NBC Nightly News

The overarching goal of the $5 million project, which is supported by a coalition of government agencies, foundations and industry partners, is to ascertain what needs to be done to make sure that high-value buildings, such as hospitals and data centers, remain operational after going through an earthquake. Researchers also will assess whether the building’s fire barriers have been affected by the shakes.

“This research is representative of the service that UC San Diego provides: we seek to solve real-world problems and make a lasting impact,” said Suresh Subramani, executive vice chancellor for Academic Affairs. “An investment in UC San Diego allows us to continue to tackle the difficult questions that face society, and leads to tangible outcomes such as saving lives by making buildings safe during earthquakes.“

During the first day of testing, on April 17, the five-story building was subjected to motions recorded during the 1994, 6.7-magnitude Northridge earthquake and 2010, and 8.8-magnitude San Pedro earthquake in Chile. The two tests were extensively covered by all major news networks, a host of national newspapers and news wires, as well as many local TV and radio stations. Documentaries on the project also are in the works.

During the tests, the base of the building, which was equipped with cylindrical rubber bearings that isolate it from most of the lateral motion it would normally experience during a temblor, swayed significantly. But the 1.4 million pound structure resting on top of the isolators suffered little distortion. This is the first time such a base isolation system was tested under a full-scale building on a shake table in the United States, to see how it would withstand significant temblors. During the second week of testing, the base isolation bearings will be removed and the building’s foundation will be anchored directly on the shake table. 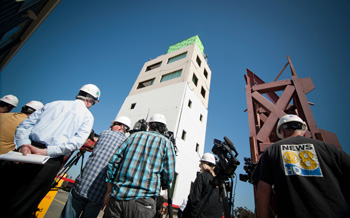 “Today’s test was really a success in the sense that the base isolators below the building protected the nonstructural components from the damaging effects of the ground motions,” said Tara Hutchinson, a professor of structural engineering at the Jacobs School of Engineering at UC San Diego and the project’s lead principal investigator. “Had this building been occupied, it would remain operational after these earthquakes.”

“We did observe some minor damage on the interior, in particular things that are quite sensitive or brittle elements, such as partition walls, in the form of cracking of mud and tape, as well as movement of contents,” Hutchinson said. “But these are cosmetic, easily and economically repairable.”

Throughout the two weeks of testing, engineers are monitoring the building’s performance with more than 500 high-fidelity sensors and more than 70 cameras that record the movement of key elements and components inside the building.

“What we are doing is the equivalent of giving a building an EKG to see how it performs after an earthquake and a post-earthquake fire,” Hutchinson said.

Hutchinson is working with a multi-disciplinary team of academics and industry representatives, including Jose Restrepo and Joel Conte, both structural engineering professors at the Jacobs School.

The two-week series of experiments will feature a number of firsts: 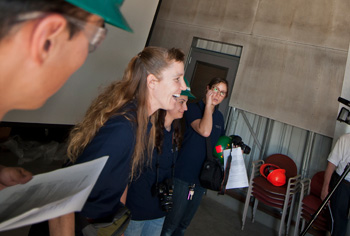 Center, Tara Hutchinson, professor of structural engineering at the Jacobs School of Engineering at UC San Diego and the project’s lead principal investigator

“The tests will have a significant impact on how engineers model the nonstructural components of a building and how they calculate what forces they need to withstand during an earthquake,” Hutchinson said. “We can improve our understanding of their performance and accuracy of design predictions by using data generated from tests such as these,” she said. “We are hoping that our work will help prevent unnecessary loss of life and loss of property.”

Researchers also hope to better understand what needs to be done to make sure medical centers remain operational after a temblor. The building’s top two floors are outfitted with a surgery suite and intensive care unit, two components of the project supported by the California Seismic Safety Commission, which investigates earthquakes and recommends to the governor and state legislature policies that will reduce earthquake risks.

Likewise, the fire-related data will help engineers model the fire performance of buildings damaged in earthquakes. “Knowing how fire protection systems might fail in an earthquake, and how the fire and smoke might spread, will allow us to design more resilient systems and provide better protection to people, property and mission,” said Brian Meacham, associate professor of fire protection engineering at WPI. 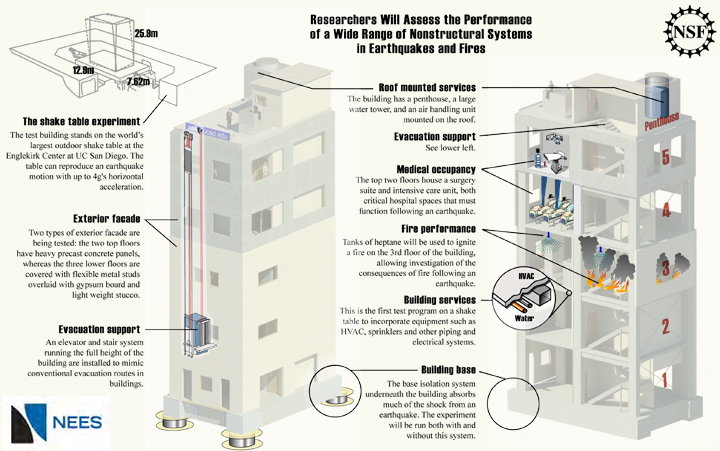 Sensors are placed strategically throughout the building to measure how components perform. For example, 230 accelerometers measure how fast the building and its nonstructural components moved during the simulated temblors. In addition, 160 sensors, including high resolution GPS devices, measure the relative displacement between two points, while 50 strain gauges measure the deformation of the rebar that are buried in the building’s concrete foundations. About 80 cameras are focused on the building, with most of these distributed within the interior of the building to monitor the nonstructural elements during the tests.

During the two weeks of testing, researchers will put the buildings through a variety of simulated temblors, using motions that have been recorded from:

During this complex series, researchers also are investigating the performance of nonstructural systems, which provide evacuation support for the occupants of a building. “In the 2011 Christchurch earthquake in New Zealand, and in other past earthquakes, stairs have failed in some buildings,” Restrepo pointed out. Scientists hope the tests will help find ways to keep elevators and stairs safe and functional after a major temblor.

Other components of the project include computer servers and laboratory equipment on the third floor. The five-story building also is outfitted with two different kinds of façade: the two top floors consist of heavy, precast concrete panels, while the three lower floors are covered with flexible metal studs overlaid with gypsum board and light-weight stucco, with the studs constructed using a multi-floor spanning strategy known as a balloon framing.

During the seismic tests, researchers from WPI, led by Meacham, are regularly inspecting passive fire protection components, including doors, ceiling systems, partition walls and fire resistant materials that seal openings in walls, to see how they are faring. If these systems are compromised, they could allow flames and smoke to spread and air to enter a room to feed a fire. They are also inspecting the condition of active fire suppression systems, particularly sprinklers. 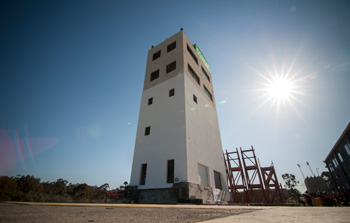 In mid-May two days of fire testing will take place on the third floor.

In mid-May, following the two weeks of seismic testing, the WPI team will perform two days of fire testing on the third floor of the building. They will ignite pans of heptane, a liquid fuel that burns hot enough to simulate full burning within a closed space. Using sensors that record temperature and smoke movement, researchers will assess how damage from the simulated earthquakes affect the ability of the active and passive fire protection systems to contain fires and prevent the spread of smoke. Though fires that take place after earthquakes are a well-known and serious hazard, very little is known about the performance of fire protection systems in earthquakes, Meacham said. The data gathered through this research could help inform more effective fire codes. In addition, this study will provide a unique opportunity to simultaneously observe the effects of shaking and fire on building systems, which could lead to new multi-hazard computer models that could help architects and engineers design safer buildings.

The project is sponsored by the National Science Foundation, the Network for Earthquake Engineering Simulation, the California Seismic Safety Commission, the Charles Pankow Foundation, the Englekirk Advisory Board, the Society of Fire Protection Engineers and a large consortium of U.S. and international industry partners.