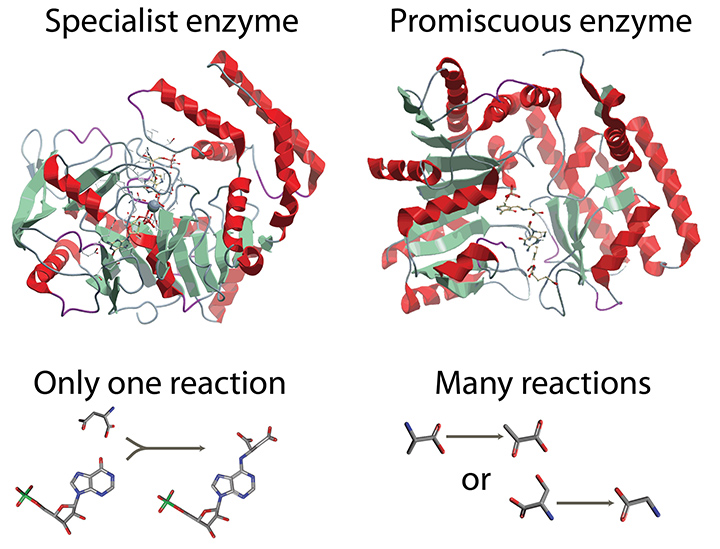 Enzymes are often thought to be specific, catalyzing only one reaction in a cell (left). However, some more promiscuous enzymes have many functions and catalyze many reactions in a cell. This study shows that promiscuous enzymes play a larger part in cell growth than previously thought.

Open an undergraduate biochemistry textbook and you will learn that enzymes are highly efficient and specific in catalyzing chemical reactions in living organisms, and that they evolved to this state from their “sloppy” and “promiscuous” ancestors to allow cells to grow more efficiently. This fundamental paradigm is being challenged in a new study by bioengineers at the University of California, San Diego, who reported in the journal Science what a few enzymologists have suspected for years: many enzymes are still pretty sloppy and promiscuous, catalyzing multiple chemical reactions in living cells, for reasons that were previously not well understood.

In this study, the research team, led by Bernhard Palsson, Galetti Professor of Bioengineering at the UC San Diego Jacobs School of Engineering, brought together decades of work on the behavior of individual enzymes to produce a genome-scale model of E. coli metabolism and report that at least 37 percent of its enzymes catalyze multiple metabolic reactions that occur in an actively growing cell.

“We’ve been able to stitch all of the enzymes together into one giant model, giving us a holistic view of what has been driving the evolution of enzymes and found that it isn’t quite what we’ve thought it to be,” said Palsson.

When organisms evolve, it is the genes or proteins that change. Therefore, gene and protein evolution has classically been studied one gene at a time. However in this work, Palsson and his colleagues, introduce an important paradigm shift by demonstrating that the evolution of individual proteins and enzymes is influenced by the function of all of the other enzymes in an organism, and how they all work together to support the growth rate of the cell.

Using a whole-cell model of metabolism, the research team found that the more essential an enzyme is to the growth of the cell, the more efficient it needs to be; meanwhile, enzymes that only weakly contribute to cell growth can remain ‘sloppy.’ The study found three major reasons why some enzymes have evolved to be so efficient, while others have not: 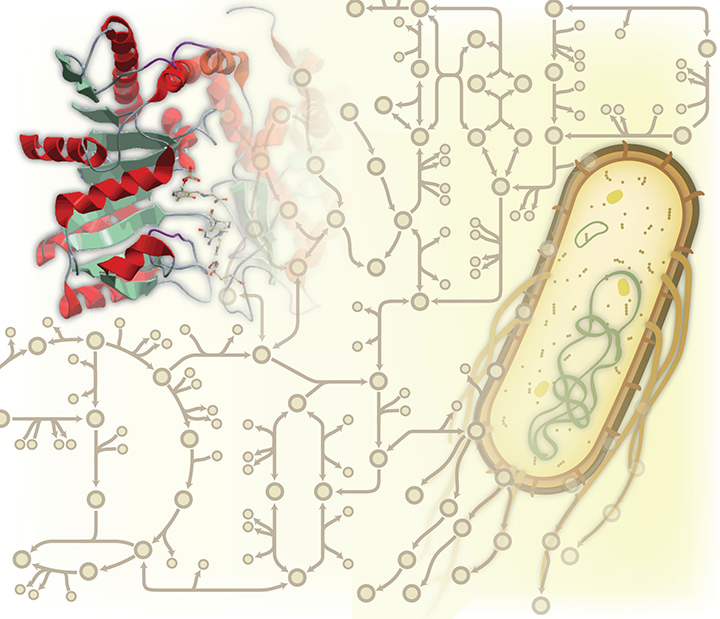 Each gene and protein in a cell has a function, and many of these functions are linked to each other. Thus, as organisms evolve, the collective functions of all genes and proteins in the cells influence the evolution of each gene or protein.

“Our study found that the functions of promiscuous enzymes are still used in growing cells, but the sloppiness of these enzymes is not detrimental to growth. They are much less sensitive to changes in the environment and not as necessary for efficient cell growth,” said Nathan Lewis, who earned a Ph.D. in bioengineering at the Jacobs School in March and is now a postdoctoral fellow at Harvard Medical School.

This study is also a triumph in the emerging field of systems biology, which leverages the power of high-performance computing and an enormous amount of available data from the life sciences to simulate activities such as the rates of reactions that break down nutrients to make energy and new cell parts. “This study sheds light on the vast number of promiscuous enzymes in living organisms and shifts the paradigm of research in biochemistry to a holistic level,” said Lewis. “The insights found in our work also clearly show that fine-grained knowledge can be obtained about individual proteins while using large-scale models.” This concept will yield immediate and more distant results.

“Our team’s findings could also inform other research efforts into which enzymes require further study for overlooked promiscuous activities,” said Hojung Nam, a postdoctoral researcher in Palsson’s lab. “Besides testing and characterizing more enzymes for potential promiscuous activities, enzyme promiscuity could have far-reaching impacts as scientists try to understand how unexpected promiscuous activities of enzymes contribute to diseases such as leukemia and brain tumors,” said Nam.