Denise Alcantara one of 20 UCSD students at international climate negotiation 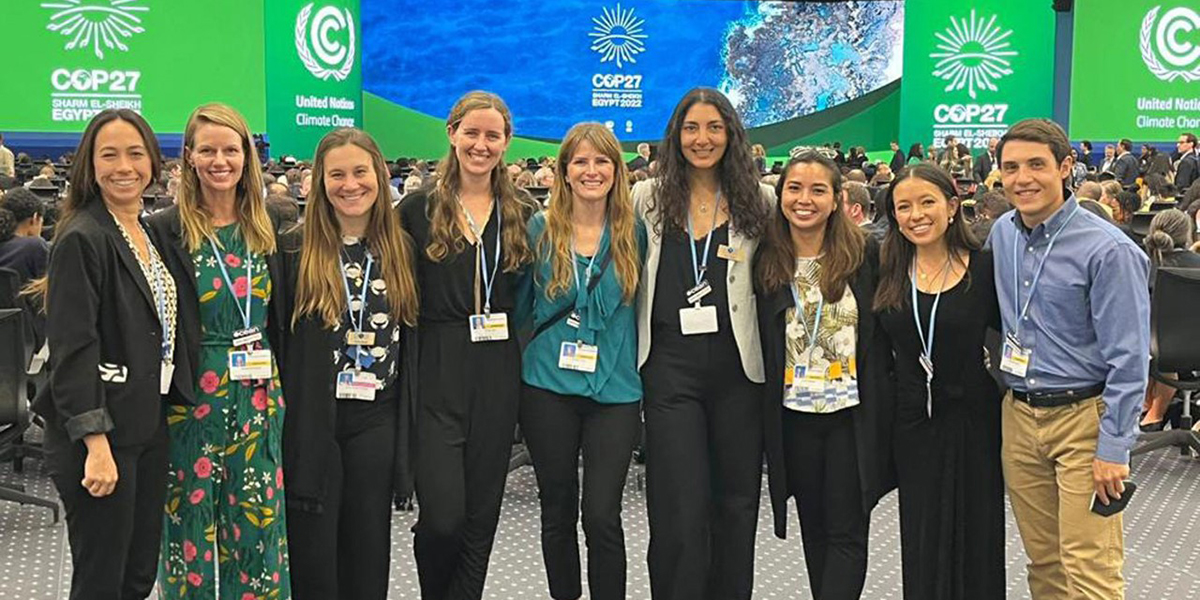 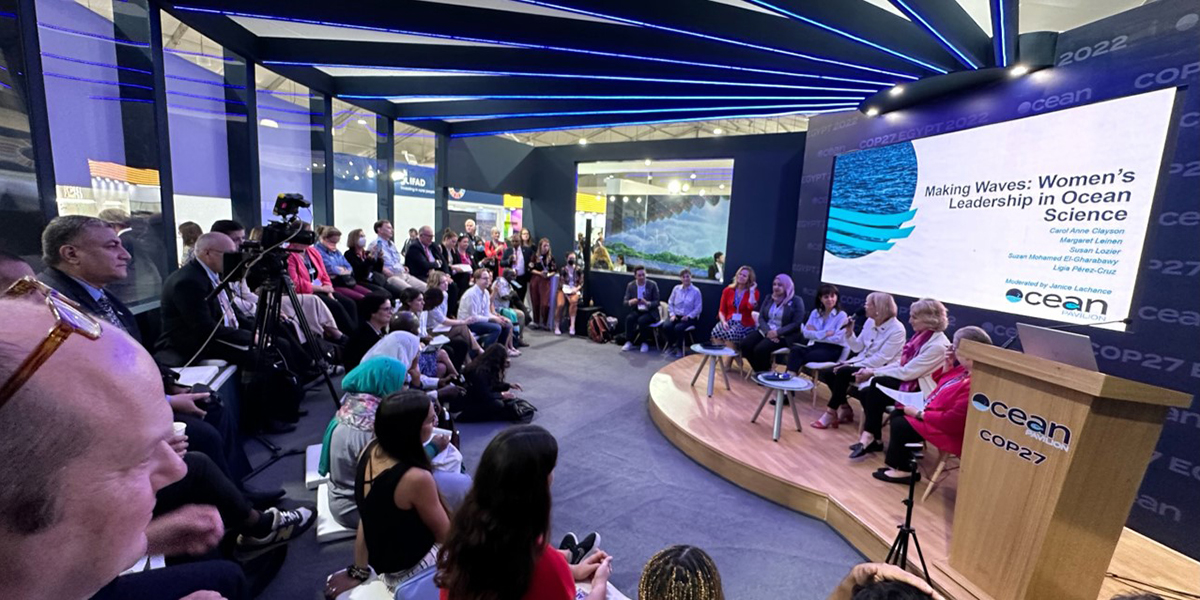 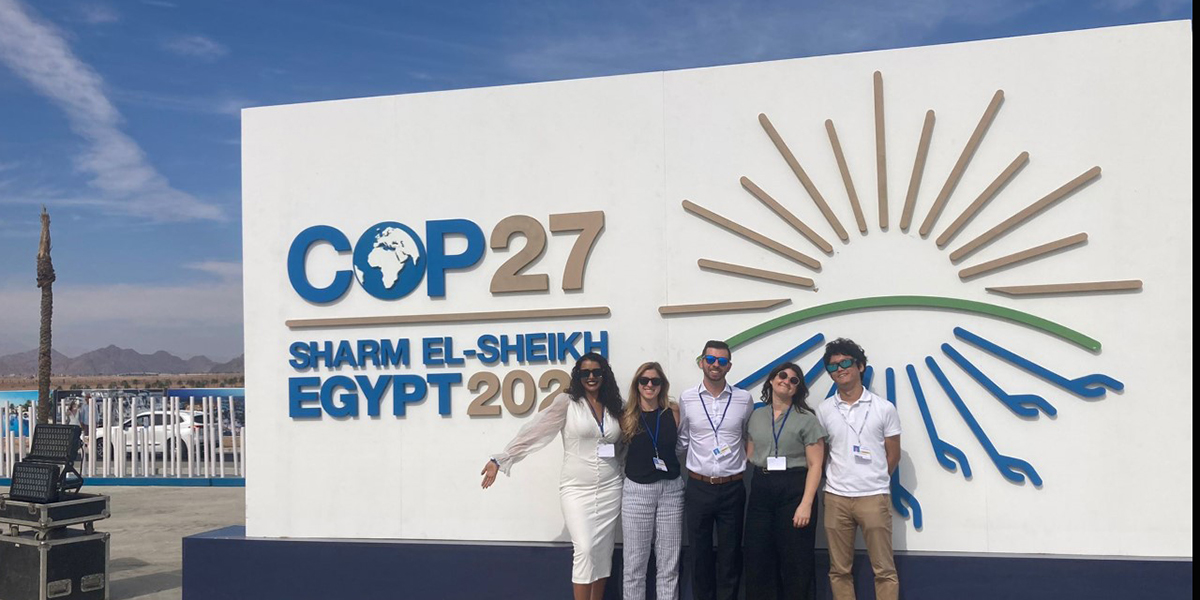 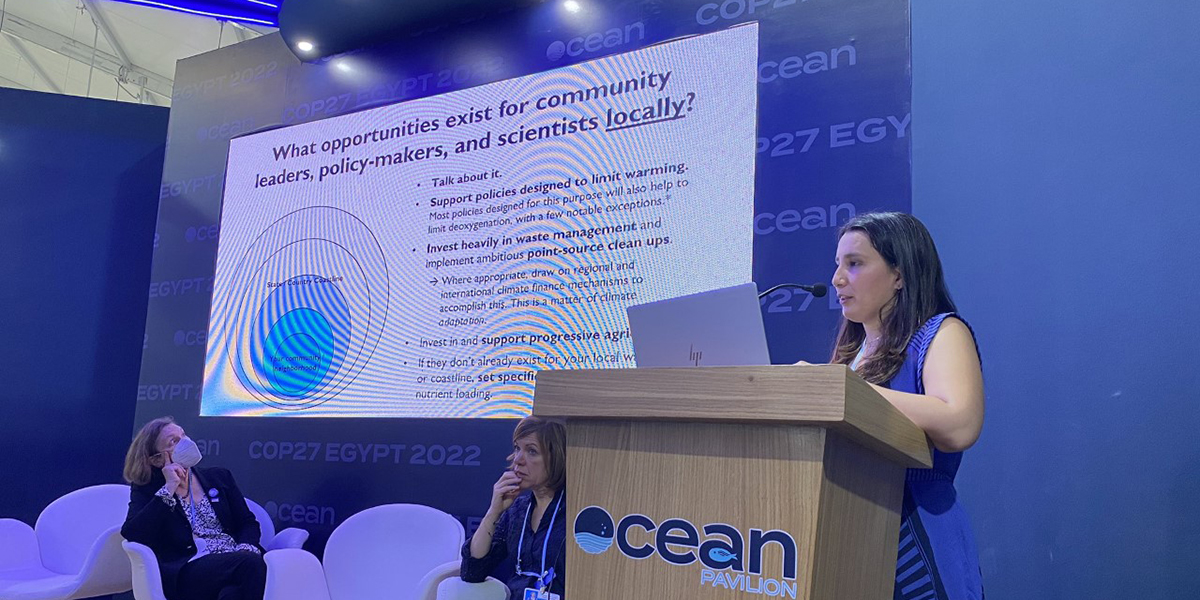 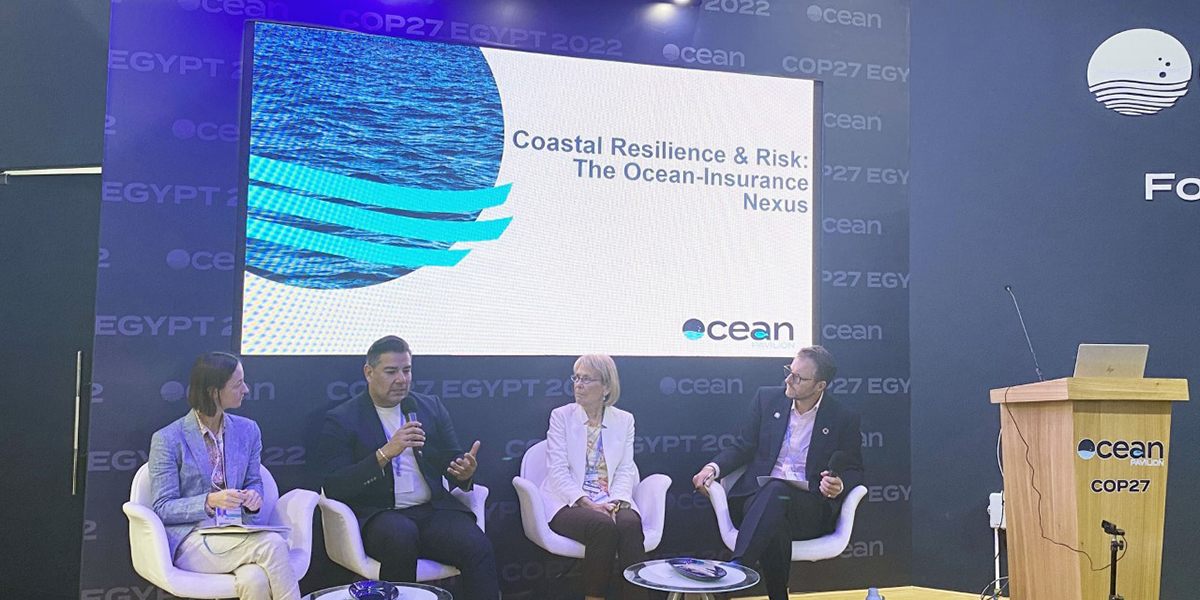 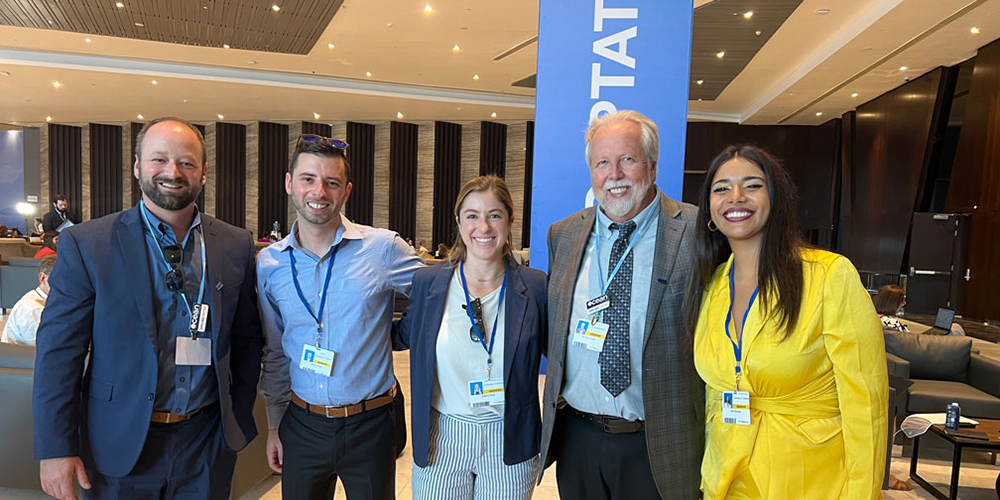 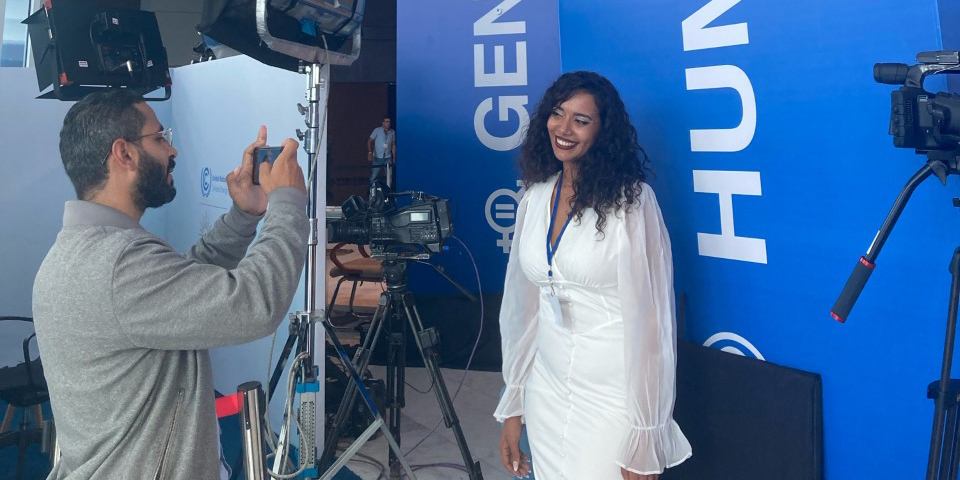 Denise Alcantara, third from right, with other members of the Scripps Oceanography contingent at COP27

Pakistan’s glaciers melted. Water and ice rushed down the mountains to the communities. Bridges and homes washed away in an instant. A storm hit the country shortly afterwards, worsening the floods.

“Permanent lakes have formed over highways, schools, hospitals, and croplands,” said Sherry Rehman, Pakistan’s Federal Minister of Climate Change after showing a harrowing video of the unprecedented series of catastrophic events that happened in Pakistan ultimately caused by due to extremely high temperatures.

Minister Rehman stood before us with piercing eyes in a side event room at the just-concluded COP27 climate conference in Sharm el-Sheikh, Egypt. Every word she uttered was deliberate. Her anger and frustration was palpable in the room.

“This is just the beginning of what could happen to the rest of the world,” she stressed. Climate change is no longer a threat. Climate change is real and it’s here—wreaking havoc with its unpredictability and immense power. “We have fought nature for over a hundred years, but now nature is fighting back.”

Today, Pakistan is facing a public health crisis with water-borne diseases affecting the population because floodwaters are in places where there shouldn’t be water.

Climate change is everybody’s problem and the annual United Nations Climate Change Conference is a unique avenue at which almost every county across the globe is invited to present its solutions and work together to find solutions. As a Filipino international student at UC San Diego’s Scripps Institution of Oceanography, I watched what might have been the most talked-about issue at this year’s event: the concept of loss and damage in which those most responsible for the climate change that has taken place so far help those with less to do with it recover from present-day damage and buttress themselves from future damage.

COP27 was a great opportunity for me to learn about how climate-vulnerable developing countries are represented at the world’s largest climate conference.

The Philippines, an archipelagic country of over 7,000 islands in Southeast Asia, is currently ranked number 1 in the World Risk Index—an annual report assessing each country’s disaster risk from hurricanes/typhoons, floods, sea-level rise, tsunamis, earthquakes, and the vulnerability of societies from these hazards.

In November 2013, one of the deadliest and costliest typhoons in history, Super Typhoon Haiyan, killed more than 6,000 Filipinos and cost the Philippine economy $2.2 billion in damages. How can a country recover from that loss, especially when several super typhoons have made landfall in the Philippine islands since Haiyan?

In the high-level side event “Climate Finance Needs of Developing Countries,” Maldives’ Minister of Environment, Climate Change and Technology Aminath Shauna revealed that one of the biggest issues that climate-vulnerable countries face is access to funds. “It takes four to five years to access funds,” she said. In the same side event, Shawn Edward, Minister of Education, Sustainable Development, Innovation, Science, Technology and Vocational Training in the Carribean country of Saint Lucia, added that they are left with no choice but to borrow because of the degree of frequency of disasters affecting countries like his. Bureaucracy was the main concern among the ministers present at the event. They demanded simpler and more efficient schemes to access funds.

How can developing countries implement adaptation plans when there is little money available and that available money is hard to access? How can a country meet its development goals when the forecast is that the disasters already felt will intensify as the temperature rises? This year’s COP is dubbed as Implementation COP and implementation cannot be done without effective climate finance mechanisms.

Talks on loss and damage began in COP13 in 2007 and were officially adopted in the Paris agreement at COP21 in 2015. In the Paris Agreement, the importance of averting, minimizing and addressing loss and damage was recognized. It is a fact that the countries suffering the worst impacts of climate change are the countries that contributed the least to the problem. Loss and damage could be one of the ways for the countries who profited the most from burning fossil fuels to pay climate reparations.

Where are we on this? Short answer is it’s still in the works.

Aside from the negotiations and the side events organized by the UN, governments or Parties and civil society groups are given the opportunity to host events and exhibit their research and/or advocacy through Pavilions.

For the first time in COPs, an Ocean Pavilion was organized to showcase the importance of ocean-based solutions in addressing climate change. This was made possible through Scripps Institution of Oceanography and Woods Hole Oceanographic Institution and 18 partners, which are also science- and research-focused institutions.

The oceans control the climate. There is an urgent need to integrate the best available ocean science to inform policy. What is happening to our oceans? How is it affecting the world’s climate? How is the changing ocean affecting both marine and terrestrial life? What are the current marine technologies that can detect these changes? How can we develop better models to better predict disasters such as typhoons?

Oceans absorb 90 percent of heat from global warming. While they serve as buffers keeping the planet from warming to levels posing existential threats to society, warmer oceans pose critical hazards to both land and marine organisms. The Ocean Pavilion is the hub for any ocean-related dialogue. It is the space where observers and policymakers can learn more and collaborate to help address the climate crisis.

Growing up in Manila for me meant dealing with floods and storms on a regular basis and watching the sinking of communities due to sea-level rise. My being a reef researcher in the Philippines also means witnessing hundreds of corals turn white and die due to warmer seas. Climate change has been real to me for decades. I still dream for the day when climate justice is served. Will it ever come? That is still unclear to me.

The negotiations are painfully slow. If you’re the type of person who hates group work with three or four other people working for the same goal, imagine working with almost 200 other group mates who have their own agenda. This is the excruciating process that COP negotiators have to go through during the two-week meeting of the parties. On the other hand, there are roundtable discussions that observers or members of civil society groups could participate in. I was part of a discussion on adaptation in which the Intergovernmental Panel on Climate Change was seeking concrete ideas on how to move from adaptation plans to implementation, how to overcome barriers, and identify possible opportunities. It was amazing to witness how people from different countries voice out their truths to ensure that their truth is accounted for. I am pleasantly surprised that COP had a space for this.

I started the week enraged and frustrated at the lack of representation from the Global South relative to the Global North. How can we find solutions when those with the biggest voices are the ones who caused the problem in the first place? But I still left the conference last Sunday with hope in my heart. One thing was clear to me, I am not alone. The existential problem we are all facing threatens every facet of our being and there are thousands of people who care enough to work night and day to move the needle towards progress.

Denise Alcantara is a Master of Advanced Studies Marine Biodiversity and Conservation graduate student. She is a Filipino Fulbright scholar who is involved in reef assessment and coral taxonomy in the Philippines. Logitech supported the COP27 attendance of Alcantara and other Scripps students.