Students beat 144 teams from around world to take first place 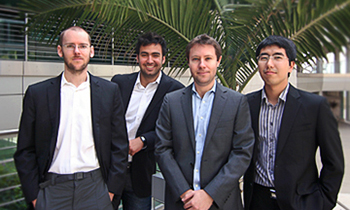 MBA students from the Rady School of Management won the Operations Simulation Competition (OpsSimCom) sponsored by the MIT Sloan School of Management Operations Club and Amazon. They were victorious over 144 student teams from top schools around the world. Rady School class of 2012 students Leo Weiyang Liu, Eric Norman, Carlos Uribe and Mark Wachtler comprised the winning team, “radyunited.” A team from the Rady School also won the competition in 2009, making this the first time in the history of the competition that a school has won twice.

“I can’t stress enough the importance of our team dynamics in the win,” Norman said. “Each one of us had a crazy idea at some point, but the ‘rule’ was you had to convince at least one other person of the strategy. This helped us double-check ideas, debate and question each other; and led to strong and robust results.”

Eight teams from the Rady School competed in the competition this year against top schools such as Yale, Duke, MIT and Tsinghua (in Beijing), with three Rady teams placing in the top 20.

During the online competition, students were given a scenario and asked to run the operations of a simulated company called “Littlefield Technologies.” This simulation is commonly used in operations classes, including the Operations, Information System and Data Analysis class taught by Rady professor Terry August.

“Winning this competition is exceptional,” August said. “These students did a fantastic job. A team can do really well and just make the top 10. The fact that they won means they made the best decisions and very few, if any, mistakes. That’s very impressive, and we’re extremely proud of them.”

Liu noted that the team faced difficulties, but were able to work together to calmly make the decisions that helped them clinch the victory.

“We developed our strategies based on data, not on gambling,” Liu said. “We made a lot of effort, even if we didn’t know what difference it could make. It turned out that our team was moving fast toward No. 1, and when it did happen, it was a huge joy. We cheered in our ‘war room,’ (Room 3E107 at Otterson Hall), at 3 a.m.”

Uribe explained that the same team entered the competition last year, but placed fourth. Because of the results of last year’s competition, they were inspired to try to win this year both for their team and for the Rady School.

“We felt great about adding our small contribution toward getting the Rady School of Management recognized for its excellence in the operations field,” he said.