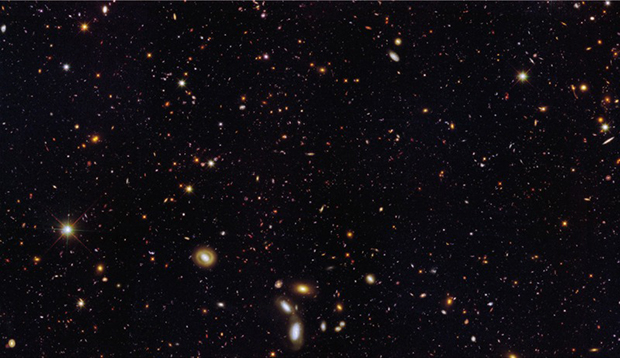 Optical images captured by the Hubble Space Telescope of distant galaxies in one of the first fields to be measured by the new collaboration. The new measurements will reveal details of the galaxies’ gases, stars and black holes. Credit: NASA/CANDELS.

Astronomers will begin an ambitious new project to measure light from thousands of distant galaxies this weekend. Over the next four years, they will spend 47 nights surveying the sky for signals from a time when the Universe was just 2 to 4 billion years old and the earliest galaxies were forming.

“In the last 10 years or so we have obtained very large samples of nearby galaxies that reveal enormous amounts of information about the stellar, gas and dust content,” said Alison Coil, an astrophysicist at the University of California, San Diego’s Center for Astrophysics and Space Sciences and one of the leaders of the project. “For these very distant galaxies we have images, especially from the Hubble Space Telescope, but we have far less information about the details of the stars, gas, dust, and black holes in them.”

To fill in the gap, a collaboration of five astronomy faculty from four UC campuses will use a new instrument mounted on the Keck I telescope on Hawaii’s Mauna Kea to record spectra, optical fingerprints that reveal the chemistry of gases and stars, from 2,000 galaxies.

Light left these very young galaxies 9 to 11.5 billion years ago and stretched just beyond the visible spectrum into the infrared as the universe expanded. The new instrument, a spectrograph called MOSFIRE that was built at UCLA, can measure infrared light from as many as 46 galaxies at a time.

These new observations will expand the catalog of this type of spectrum from extremely distant galaxies, which now numbers just a few hundred, and allow astronomers to see the same features that trace stars and gas in the earliest galaxies as they do for older galaxies nearby.

“That means we can understand how galaxies have evolved over time, because we’re observing the same kind of information for galaxies both near and far,” Coil said.

In the end, the team will have compiled a rich and unique resource that astronomers will be able to delve into to answer a wide range of astronomical questions.

Alice Shapley of UCLA, Mariska Kriek of UC Berkeley, and Naveen Reddy, Brian Siana and Bahram Mobash of UC Irvine make up the rest of the team. They’ve named their project the MOSDEF survey, for MOSFIRE Deep Evolution Field.