First-time demonstration led by Scripps Institution of Oceanography captures key meteorological data from aircraft, along with the potential to improve hurricane forecasting 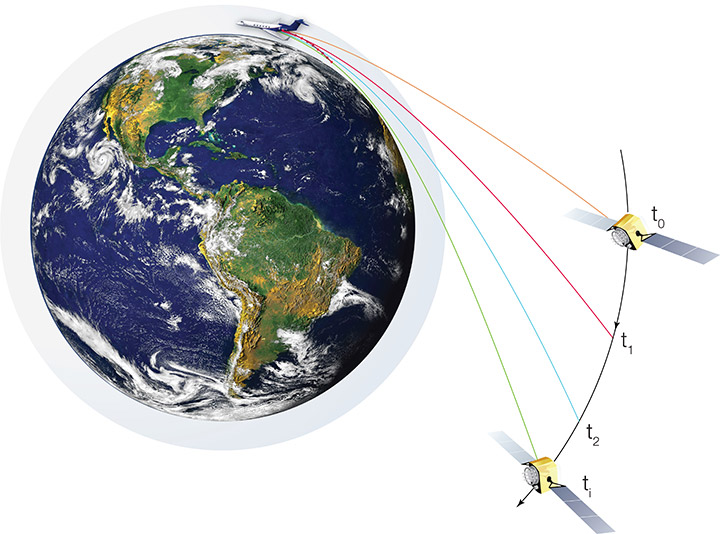 GPS technology has broadly advanced science and society’s ability to pinpoint precise information, from driving directions to tracking ground motions during earthquakes. A new technique led by a researcher at Scripps Institution of Oceanography at UC San Diego stands to improve weather models and hurricane forecasting by detecting precise conditions in the atmosphere through a new GPS system aboard airplanes.

The first demonstration of the technique, detailed in the journal Geophysical Research Letters (GRL), is pushing the project’s leaders toward a goal of broadly implementing the technology in the near future on commercial aircraft.

Current measurement systems that use GPS satellite signals as a source to probe the atmosphere rely on GPS receivers that are fixed to ground and can’t measure over the ocean, or they rely on GPS receivers that are also on satellites that are expensive to launch and only occasionally measure in regions near storms. The new system, led by Scripps Institution of Oceanography geophysicist Jennifer Haase and her colleagues, captures detailed meteorological readings at different elevations at targeted areas of interest, such as over the Atlantic Ocean in regions where hurricanes might develop.

“This field campaign demonstrated the potential for creating an entirely new operational atmospheric observing system for precise moisture profiling from commercial aircraft,” said Haase, an associate researcher with the Cecil H. and Ida M. Green Institute of Physics and Planetary Physics (IGPP) at Scripps. “Having dense, detailed information about the vertical moisture distribution close to the storms is an important advancement, so if you put this information into a weather model it will actually have an impact and improve the forecast.” 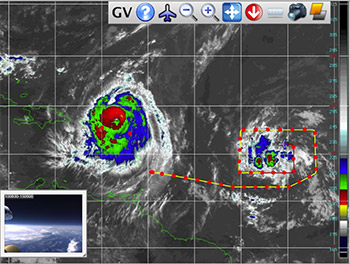 The flight track of a Gulfstream V research aircraft carrying the GISMOS system during a 2010 flight campaign with Hurricane Earl (left), a cloudy area that eventually formed tropical storm Fiona (right), and a view of the developing system from the aircraft (inset). Image credit, Earth Observing Laboratory at the National Center for Atmospheric Research.

“These are exciting results, especially given the complications involved in working from an airplane,” says Eric DeWeaver, program director in the National Science Foundation’s (NSF) Division of Atmospheric and Geospace Sciences, which funded the research. “Satellite-based measurements are now regularly used for weather forecasting and have a big impact, but airplanes can go beyond satellites in making observations that are targeted right where you want them.”

The GRL paper details a 2010 flight campaign aboard NSF aircraft and subsequent data analysis that demonstrated for the first time that atmospheric information could be captured by an airborne GPS device. The instrumentation, which the scientists labeled “GISMOS” (GNSS [Global Navigation Satellite System] Instrument System for Multistatic and Occultation Sensing), increased the number of atmospheric profiles for studying the evolution of tropical storms by more than 50 percent.

“We’re looking at how moisture evolves so when we see tropical waves moving across the Atlantic, we can learn more about which one is going to turn into a hurricane,” said Haase. “So being able to look at what happens in these events at the early stages will give us a lot longer lead time for hurricane warnings.”

“This is another case where the effective use of GPS has the potential to improve the forecast and therefore save lives,” said Richard Anthes, president emeritus of the University Corporation for Atmospheric Research, which currently runs the satellite based GPS measurements system called COSMIC (Constellation Observing System for Meteorology, Ionosphere, and Climate).

While the current GISMOS design occupies a refrigerator’s worth of space, Haase and her colleagues are working to miniaturize the technology to shoe box size. From there, the system can more feasibly fit onto commercial aircraft, with hundreds of daily flights and a potential flood of new atmospheric data to greatly improve hurricane forecasting and weather models.

The technology also could improve interpretation of long-term climate models by advancing scientists’ understanding of factors such as the moisture conditions that are favorable for hurricane development.

Paytsar Muradyan, who recently received a Ph.D. from Purdue University in atmospheric sciences, started working with Haase in 2007 as a graduate student during the formative stages of GISMOS’s design and development. She eventually flew with the group in the 2010 campaign and took away a wealth of experience from the demands of the project. 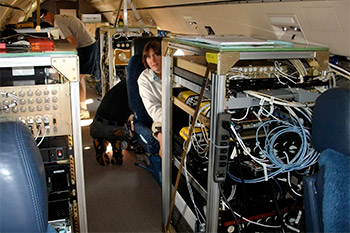 Scripps Institution of Oceanography at UC San Diego geophysicist Jennifer Haase is seated at the controls of GISMOS, a 205-pound GPS atmospheric measurement system, testing the equipment prior to flights during a 2010 campaign.

“It was a lot of responsibility but certainly rewarding to work with a group of world-known scientists in an interdisciplinary project,” said Muradyan.

In addition to Haase and Muradyan, coauthors of the project include students Brian Murphy and Kuo-Nung Wang, and Professor James Garrison of Purdue University; F. Felipe Nievinski of Universidade Estadual Paulista, Presidente Prudente (Brazil); and Professor Kristine Larson of the University of Colorado, Boulder.