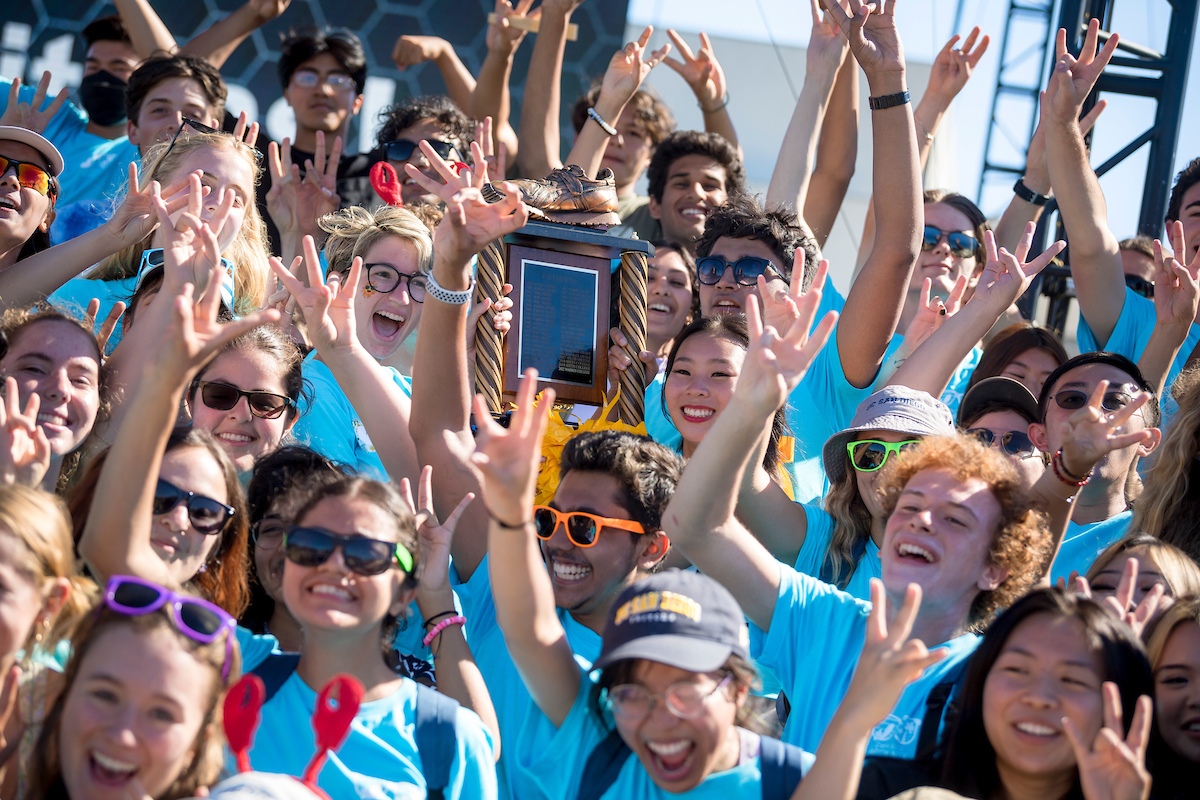 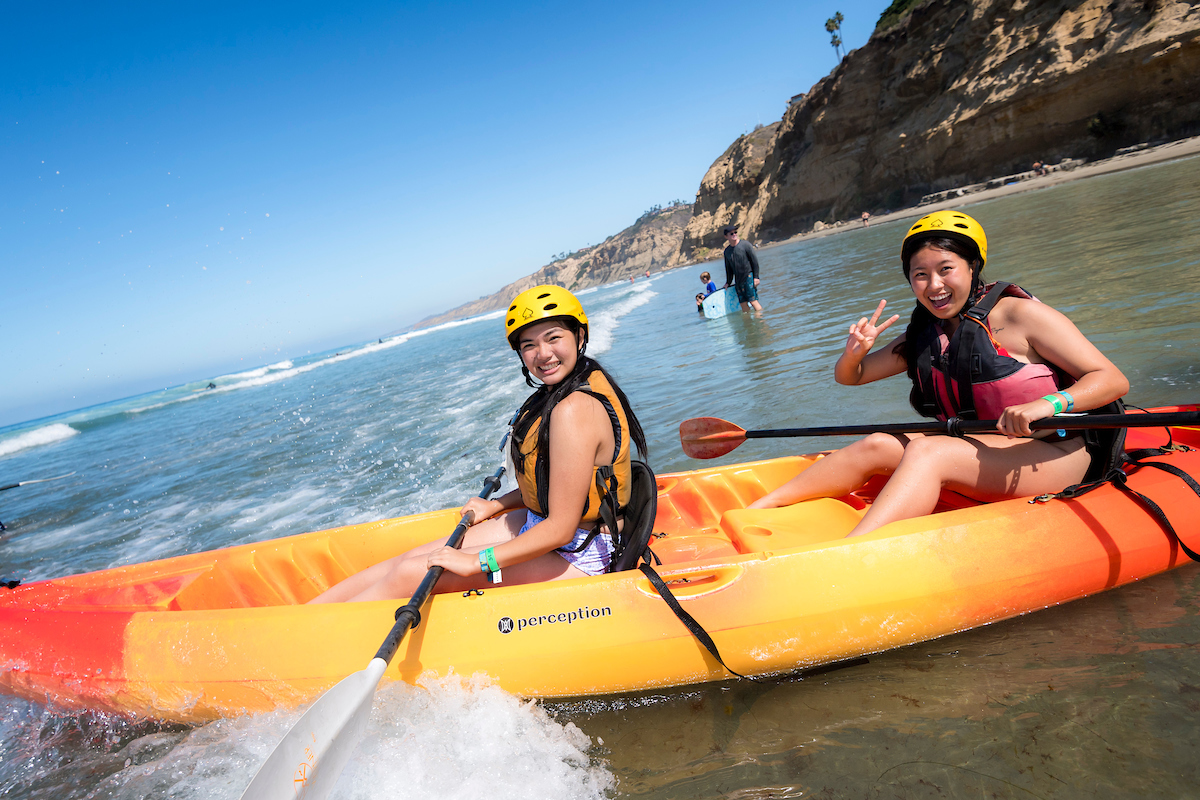 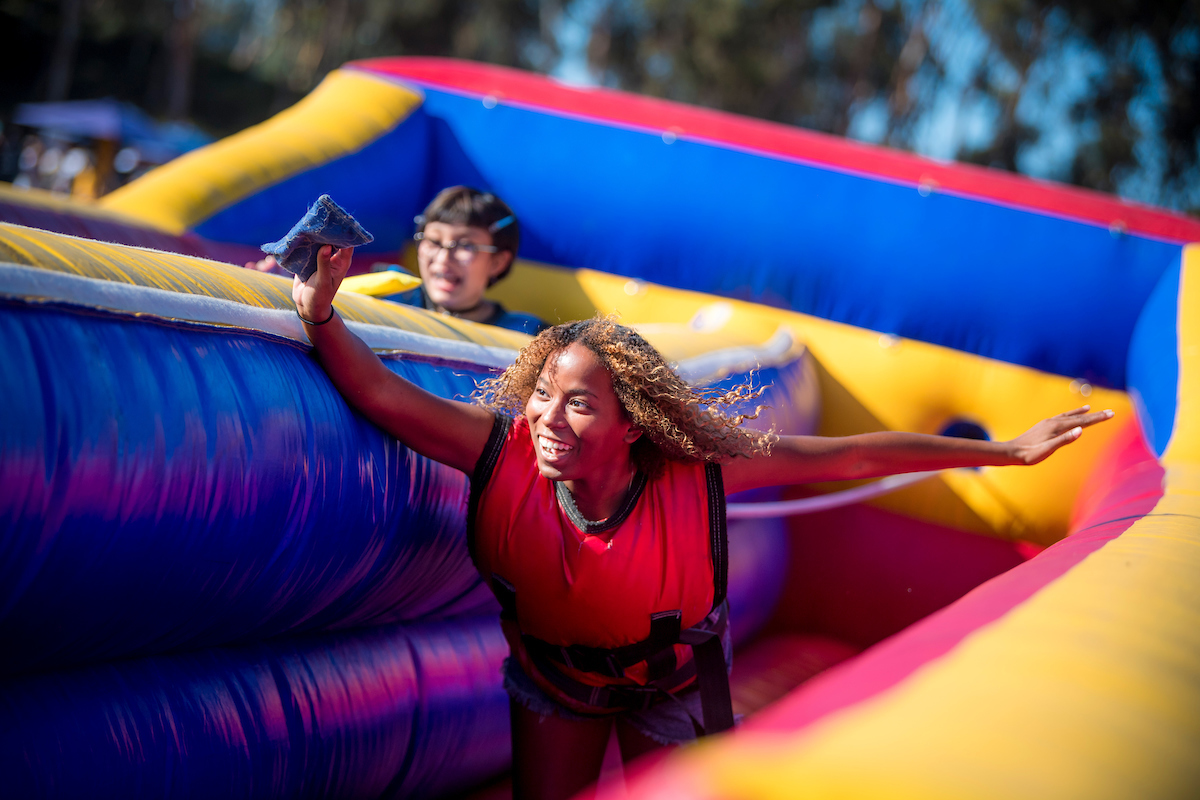 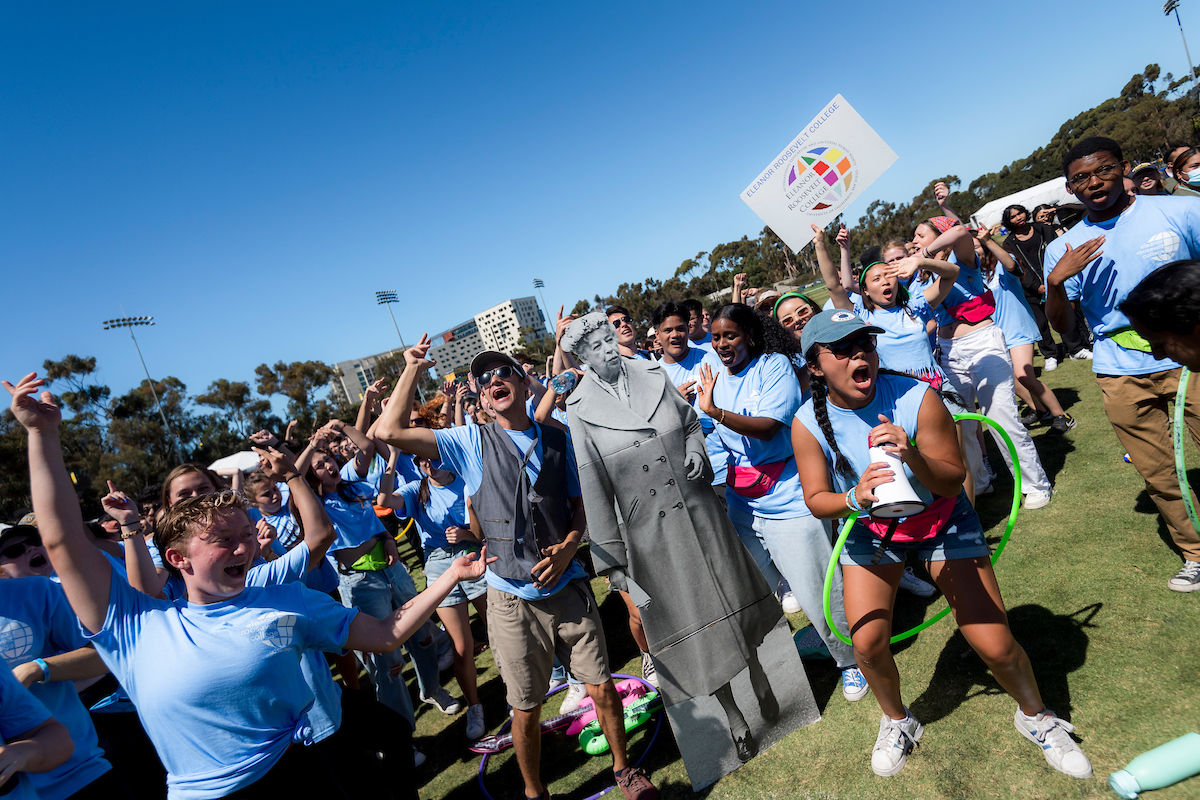 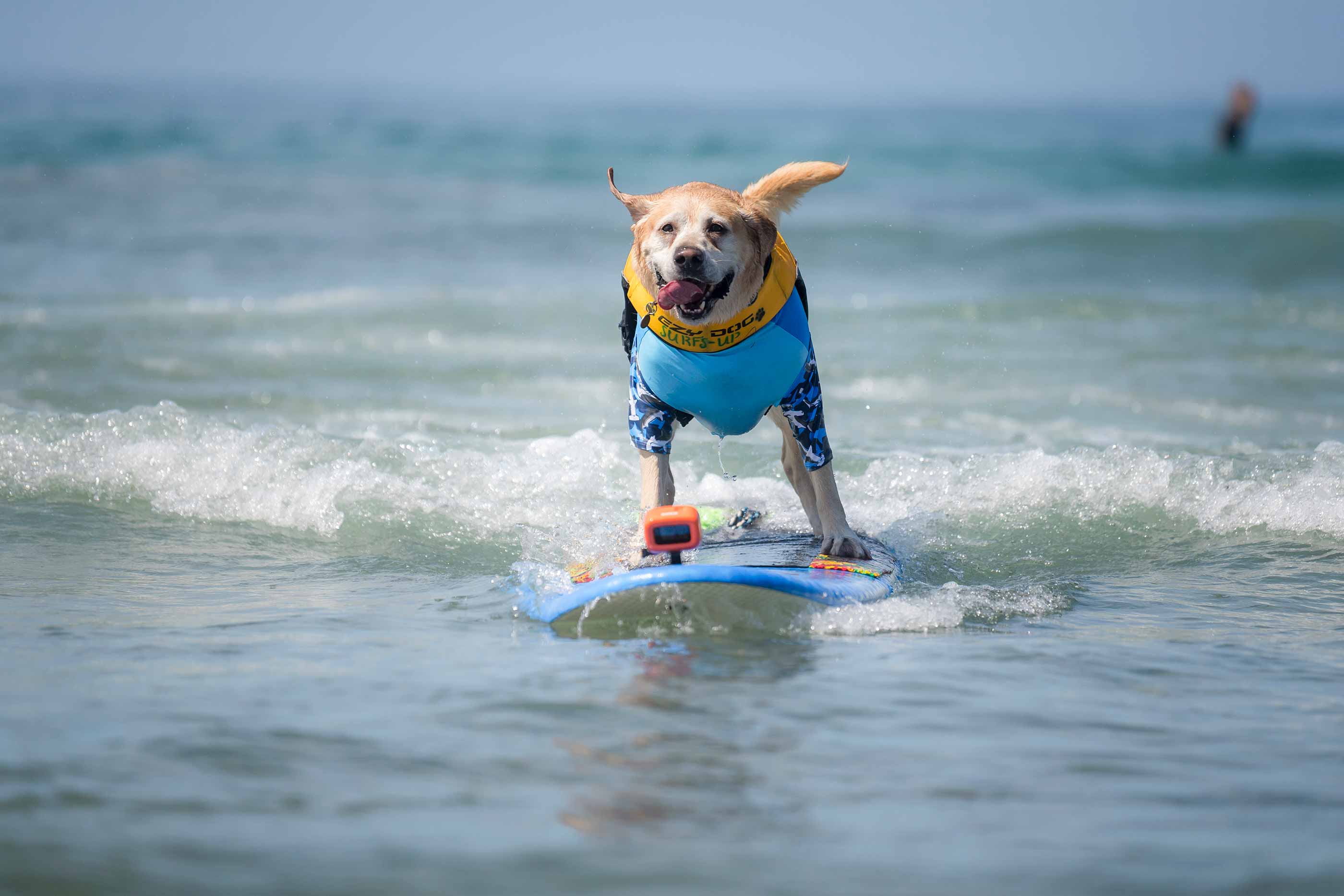 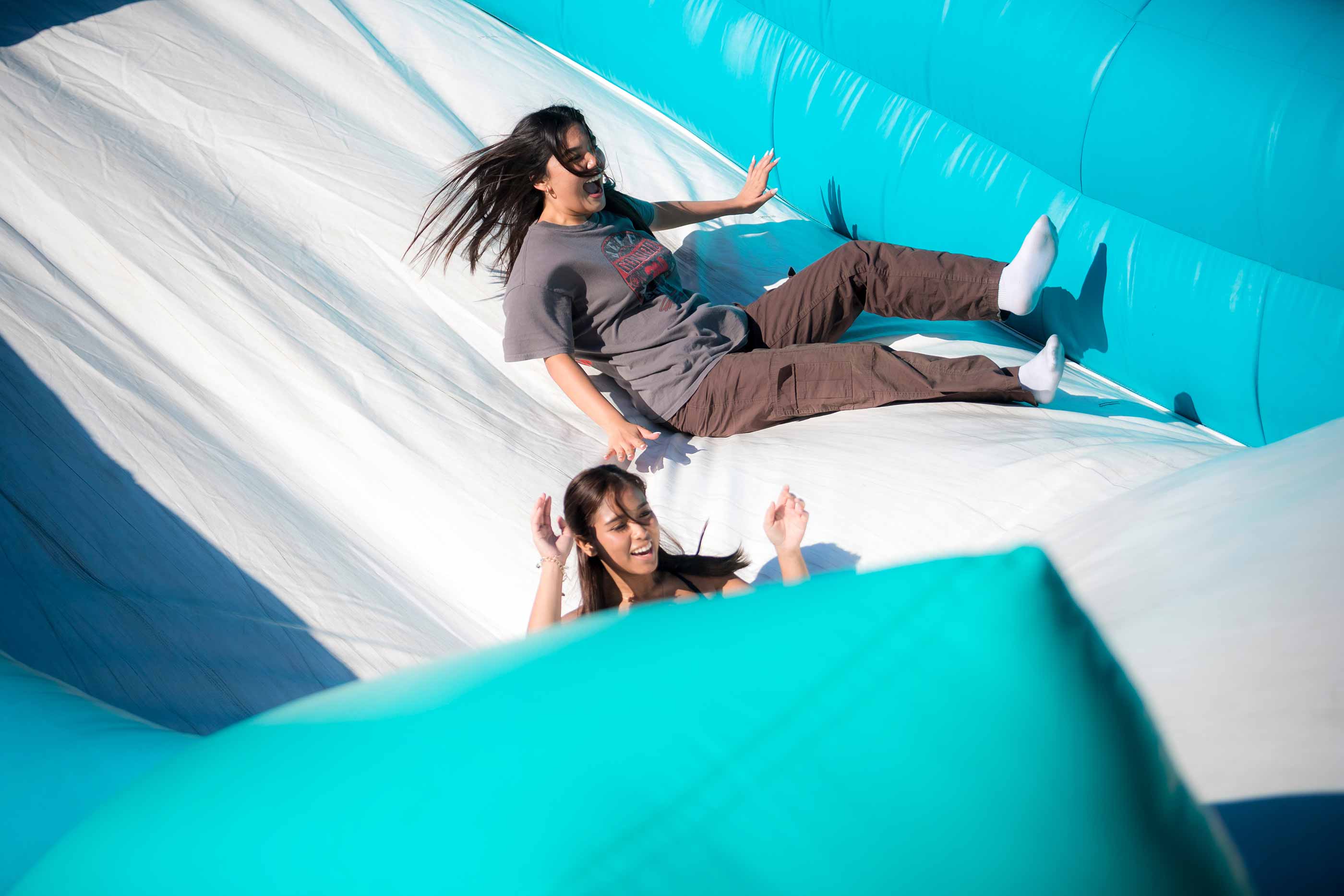 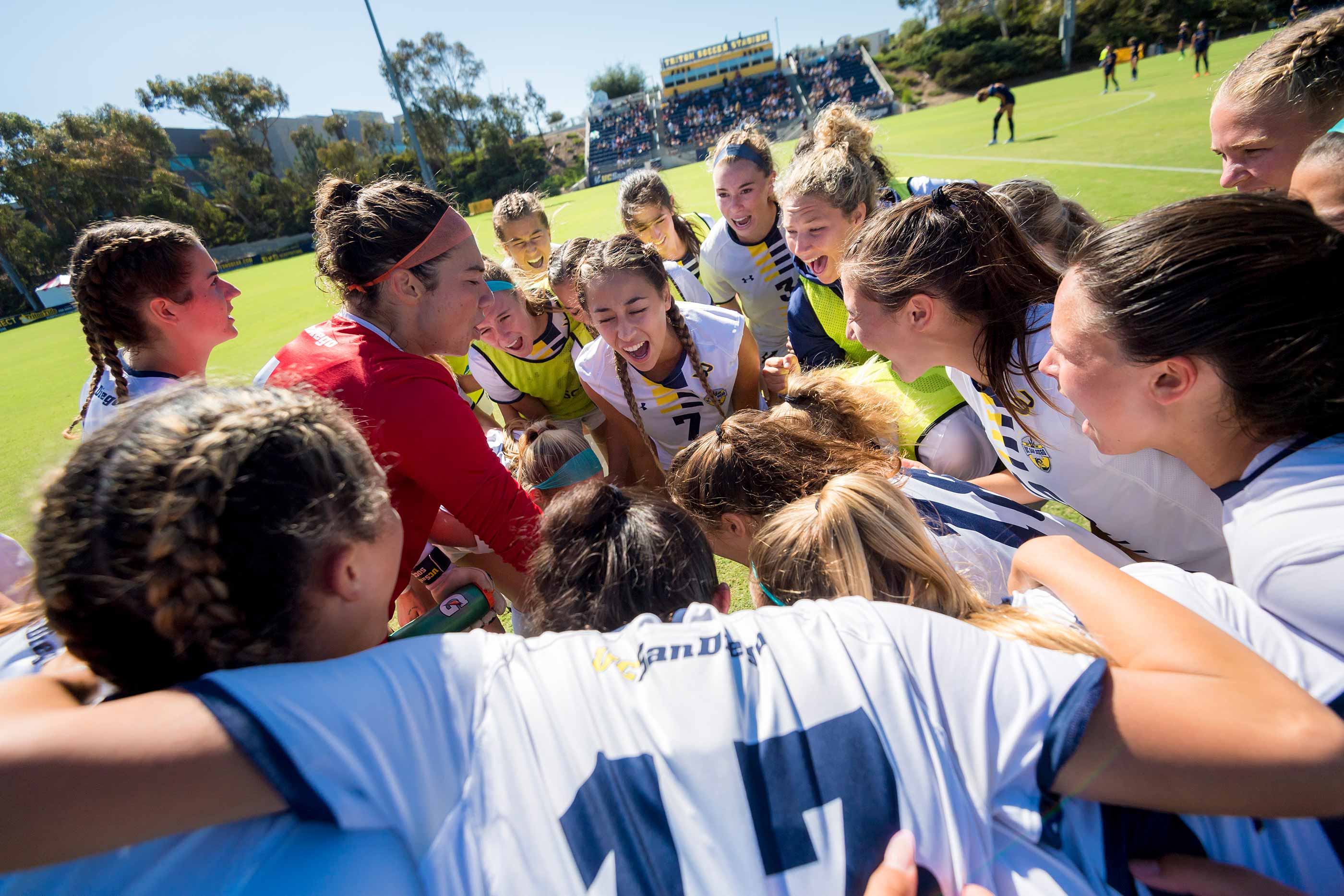 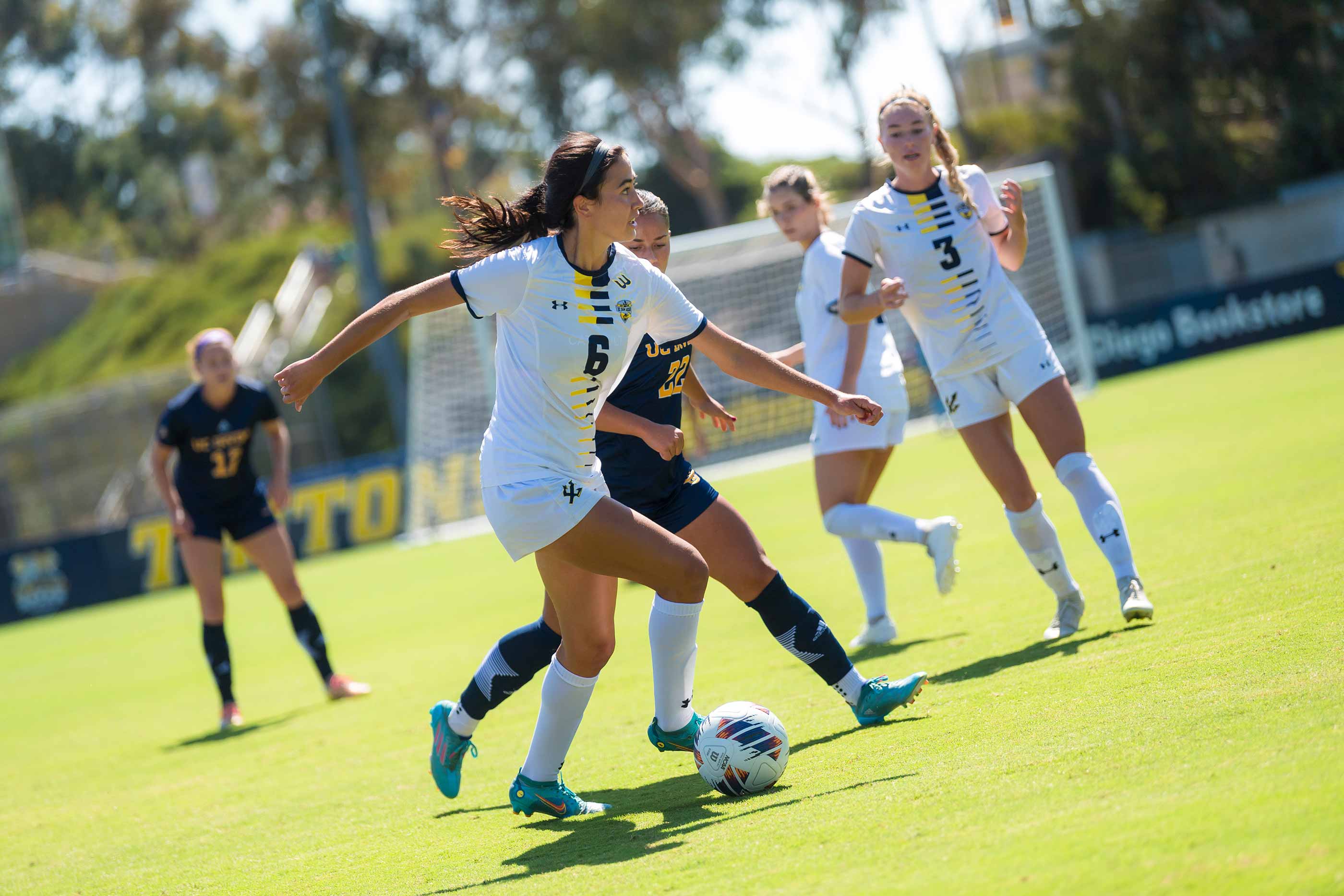 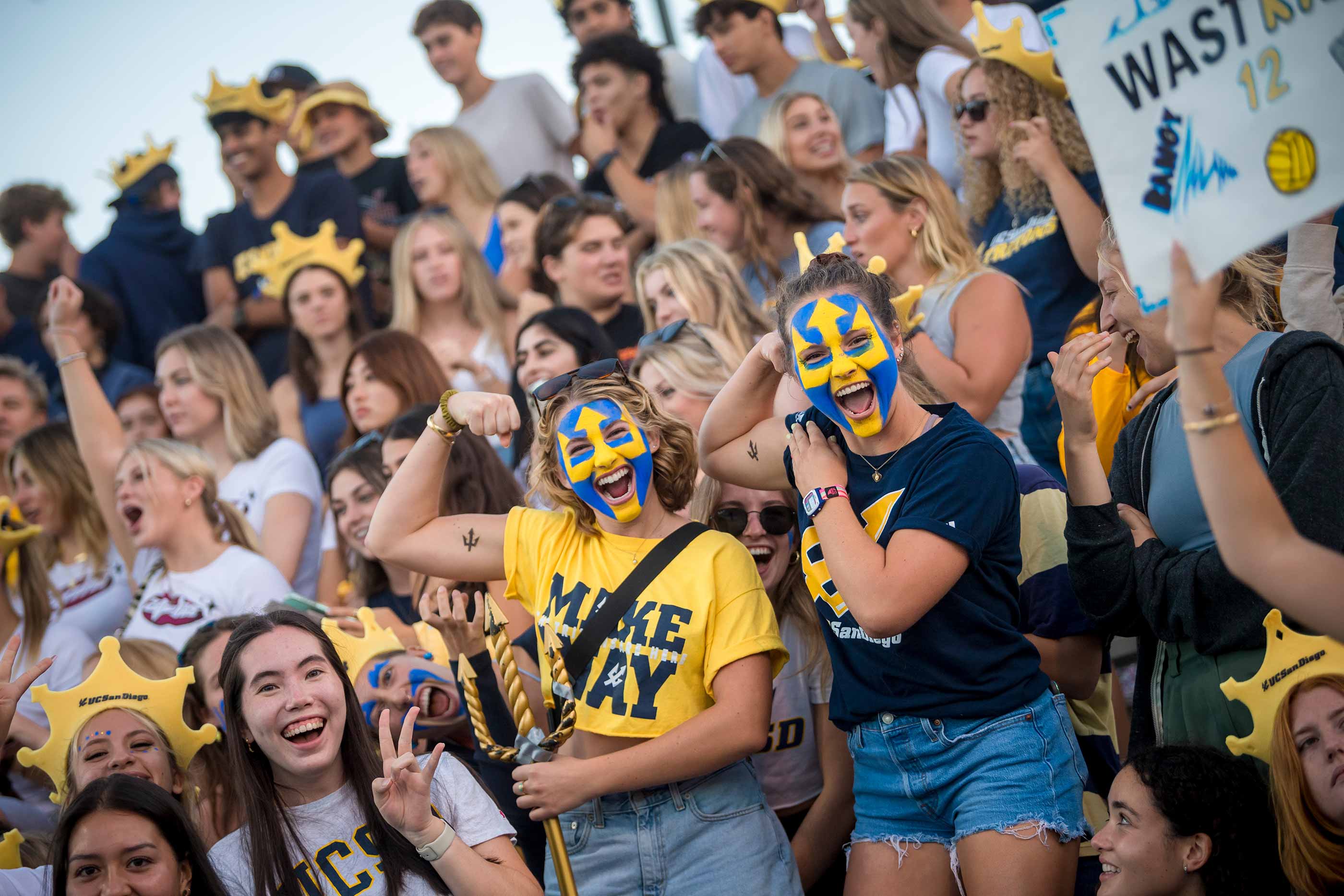 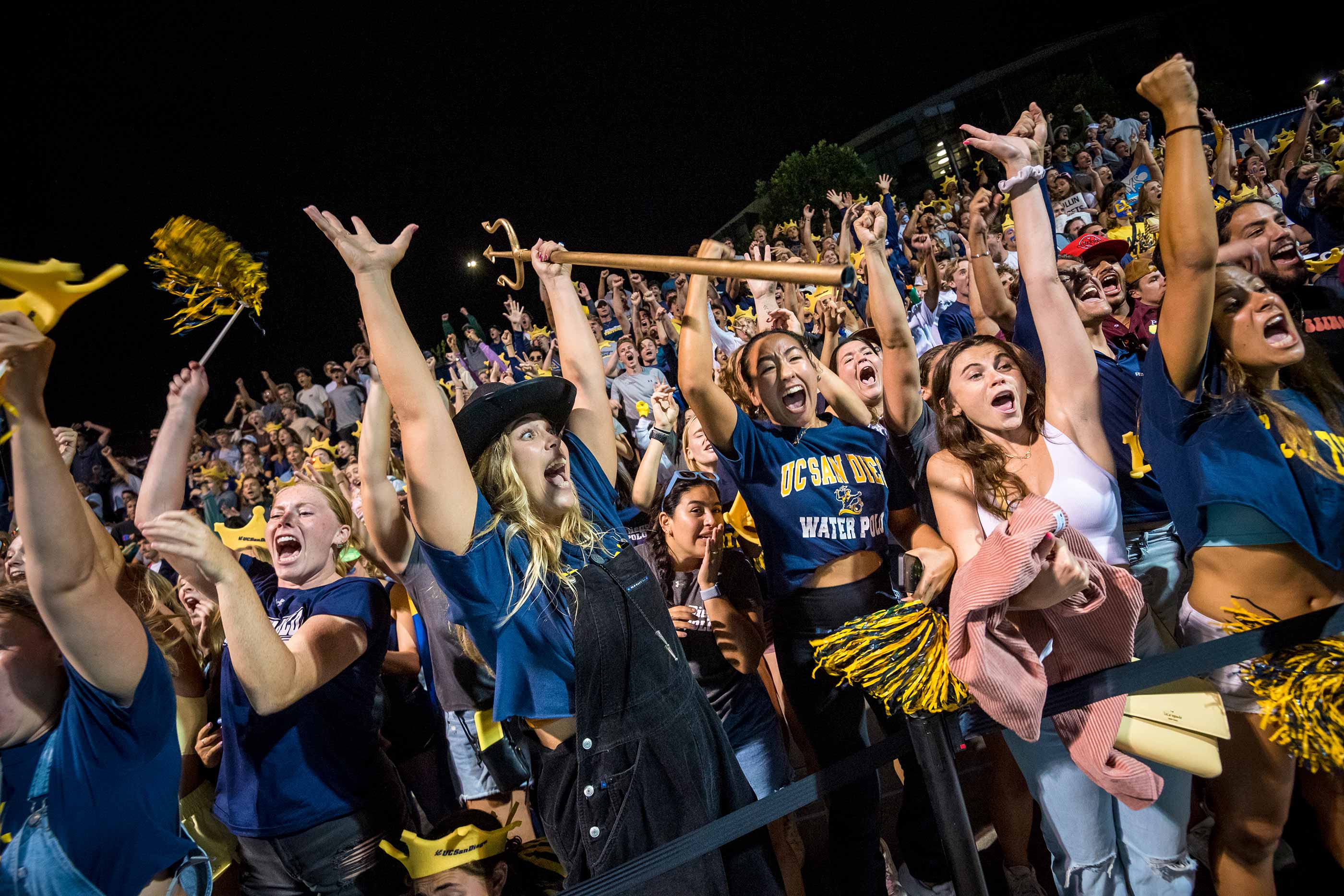 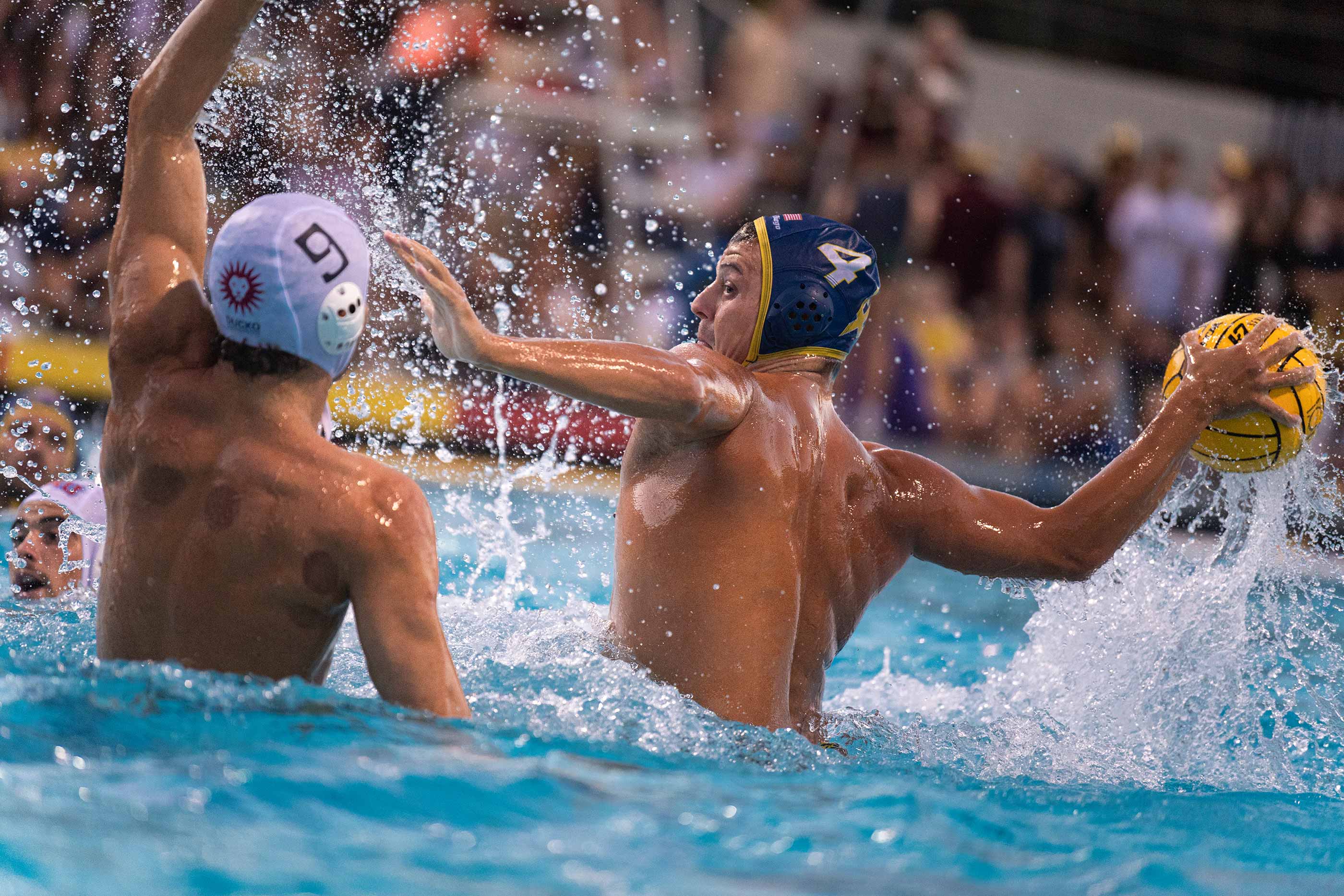 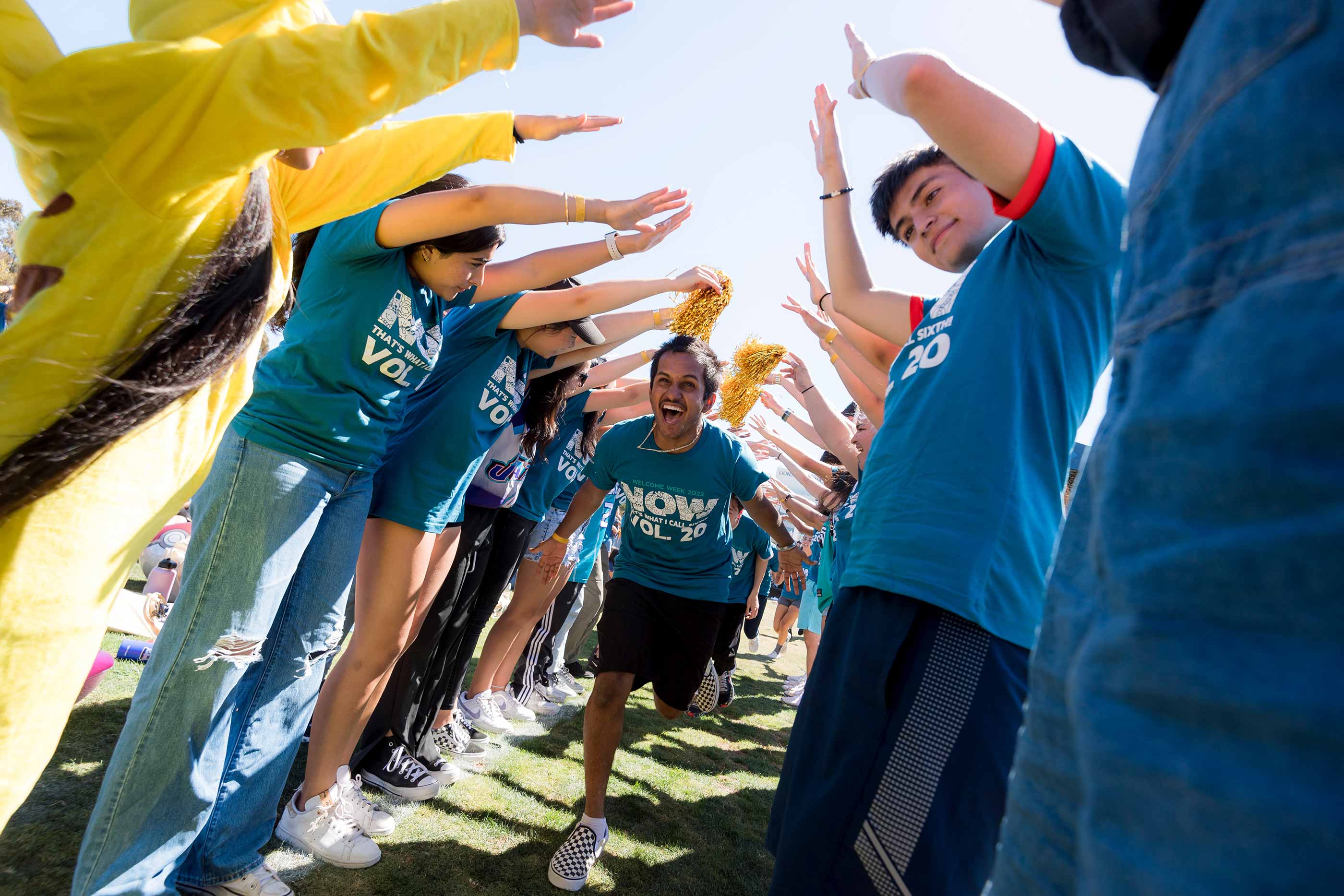 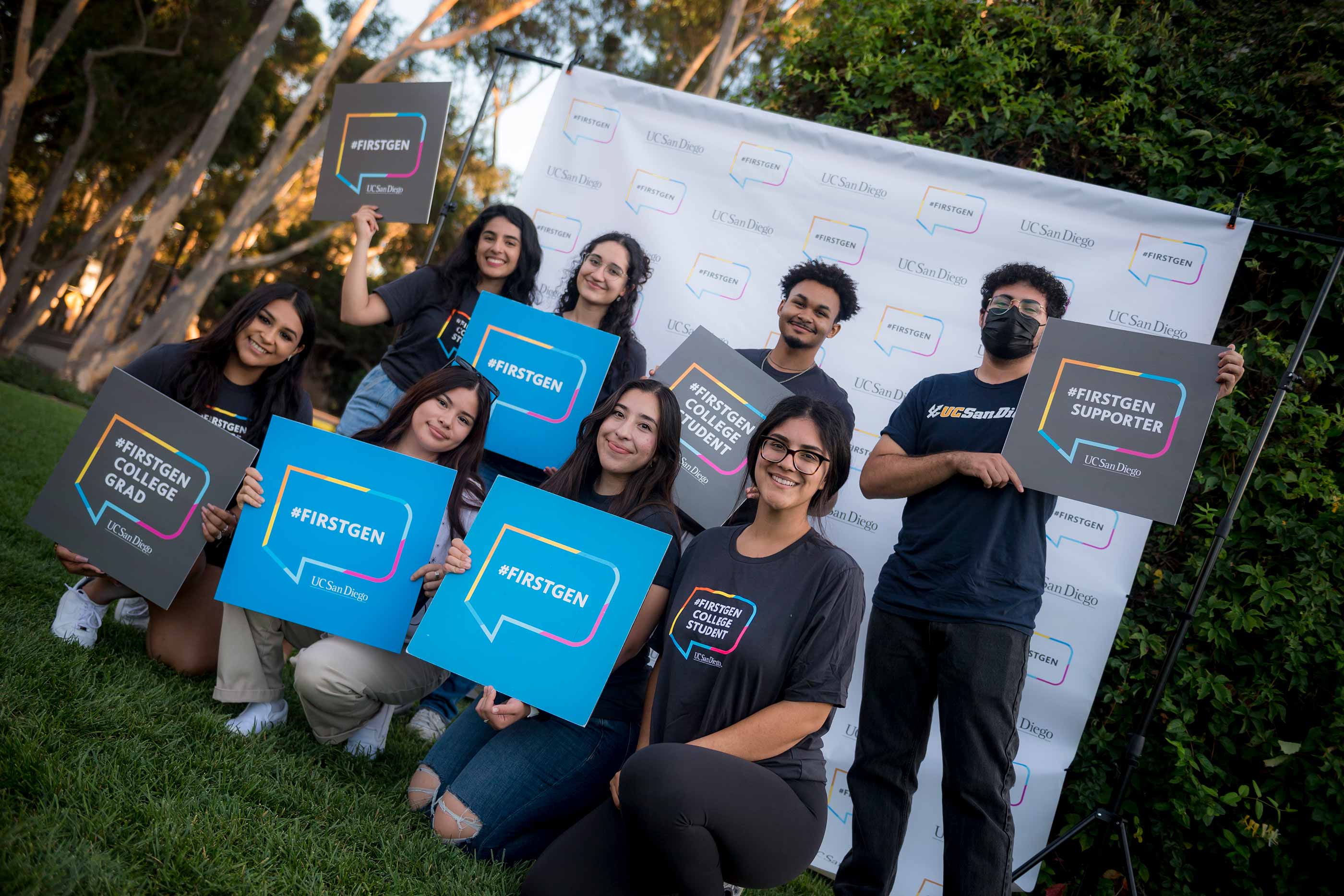 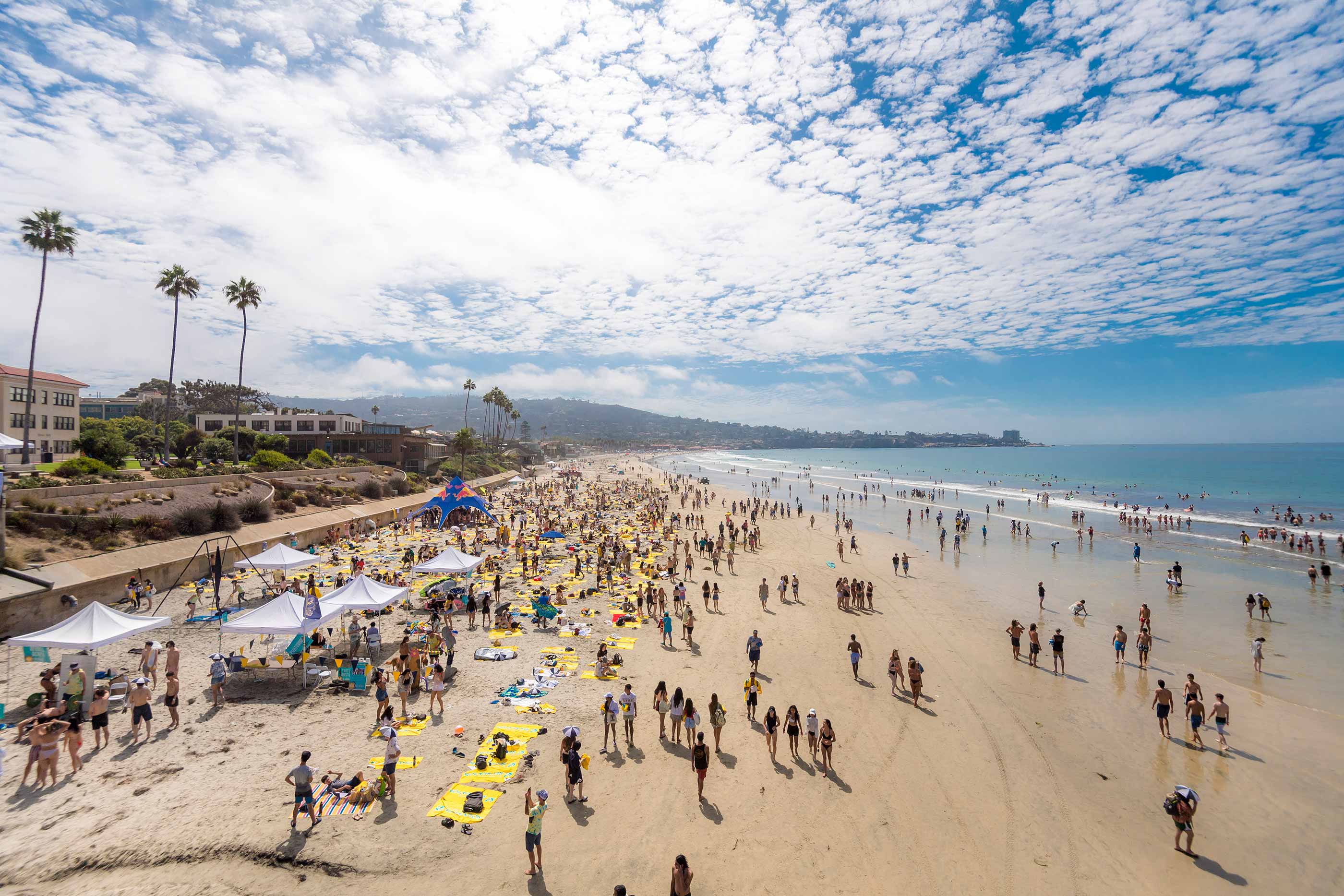 New and returning Tritons had the chance to rent kayaks and boogie boards and venture into the ocean as part of the annual Meet the Beach event, hosted by UC San Diego Recreation.

Students were invited by Housing, Dining and Hospitality to join a fun night of free food, resources, activities and entertainment, including giant inflatable obstacle courses and games like giant Jenga.

The annual UnOlympics event drew hundreds of competitors, each donning their college t-shirt and proudly proclaiming their intention to be victorious. ERC even brought their college namesake, Eleanor Roosevelt, to the festivities!

One of the star attractions during the annual Meet the Beach event was the surfing dogs.

Students slide down a giant inflatable obstacle courses during the Sunset Bazaar party hosted by Housing, Dining and Hospitality.

UC San Diego's women's soccer team huddle together before the start of the second half against UC Irvine.

Sunday, Sept. 18 marked the largest home game crowd for a women’s soccer home game in the Division 1 era in their match against UC Irvine.

More than 1,300 fans filled Canyonview Aquatic Center to witness the “Battle of the Kings,” an annual match between men’s water polo and Loyola Marymount University (LMU).

Students flowed in donning yellow foam crowns, creating a sea of spirit in the stands.

Sixth college forms a tunnel to cheer on their race team at the UnOlympics.

Students pose for a group photo during the UnOlympics.

"Left Shark" made a surprise appearance during seventh college's choreographed dance at the UnOlympics.

Students gather for a group photo during the First Gen Welcome event at Sun God Lawn.

On Sunday, Sept. 24 students were invited to “Meet the Beach,” an annual event hosted by Recreation to introduce new Tritons to the ocean adventures that await just a short walk from the campus.

Students were able to sign up for surf lessons at Meet the Beach.

Triton Fest hosted "Fair at the Square" for new and returning students that include carnival games, balloon animals, a skating rink, and more!

Students show off their balloon animal during Fair at the Square.

Students sit for a cartoon caricatures of themselves at the fair.

Students enjoy the skating rink during the Fair at the Square.

There’s so much to explore at UC San Diego for those who have just set foot on the sprawling campus. As new and returning students arrived for the start of the fall quarter, they were embraced by their college community—including the chance to dance as a group at the annual UnOlympics. Many students were also drawn to the excitement of an athletic game and the joy of cheering for their home team. And what better way to conclude Triton Weeks of Welcome than a big beach party? Hundreds of undergraduates and graduates gathered to enjoy some postcard-perfect San Diego weather and take part in a variety of ocean adventures.

The more than 150 activities held throughout the past three weeks represent the range of opportunities that students have at UC San Diego to get involved and create a memorable college experience. “We try to make it easy for students to find their niche,” said Associate Vice Chancellor for Student Life Patty Mahaffey. “I always encourage students to be curious and involve themselves in something they’re interested in because social, academic and cultural engagement helps you learn about yourself, gain important leadership and communication skills and builds a sense of belonging. College is about developing your identity and interests, and we are here to support you on your journey.”

It was on stage for everyone to admire—the Golden Shoe Trophy. On Wednesday, Sept. 21, each of UC San Diego’s seven colleges desperately wanted to earn the title of UnOlympics champion and see their name engraved on the trophy’s plate. But first, they had to demonstrate their prowess in a series of challenges that tested their teamwork, choreography skills and college spirit.

The annual event hosted by Recreation and Athletics drew hundreds of competitors, each donning their college t-shirt and proudly proclaiming their intention to be victorious. The games began with bat spin–testing balance, speed and agility as students spun around a bat and raced back to their team. They also competed in sack races as well as an egg toss.

But the pinnacle of the event that captivated the crowd were the choreographed college dances. Each student group chose a theme, which also had to demonstrate unity among the colleges. Marshall College tapped into the popular Netflix show "Stranger Things," grooving to classic songs from the 1980s like Michael Jackson's "Thriller." And Scooby-Doo made a debut in the Mystery Machine as Warren College students sought to capture and unmask familiar Halloween characters.

After all of the spinning and hopping and dancing were done, students waited anxiously to hear which college would take home the trophy. After much deliberation, the judges named Seventh College the victor. Shouts and hollers resounded as the students ran to the stage to claim their prize, thrilled that their teamwork and efforts were recognized.

The day couldn’t have been more ideal—sunny with a light breeze, high tide with gentle waves crashing in the distance, cool water to wade in. On Sunday, Sept. 24 students were invited to “Meet the Beach,” an annual event hosted by Recreation to introduce new Tritons to the ocean adventures that await just a short walk from the campus.

After being shuttled from the main campus, students were met with a welcome package consisting of a bright yellow beach towel, an umbrella hat and a sandwich for lunch. From there many rushed to sign up for a surf lesson or to rent a kayak or boogie board so that they could get into the shimmering Pacific. Others took a more leisurely approach and settled onto their new towel to enjoy the views and conversation with new friends. There were also volleyball, football and Spikeball games to jump into.

Near the Scripps Institution of Oceanography pier, students could test their strength at “Muscle Beach,” get acrobatic with aerial silks and get creative at a beach-themed photo booth. The campus’s Deejay’s and Vinylphiles Club (DVC) set the vibe with music, and Recreation’s Class CoordinatorHector Fletes led the crowd in a series of dance sequences that had everyone on their feet—cheering loudly when he revealed an umbrella filled with rose petals when the song “Rain on Me” by Ariana Grande and Lady Gaga started.

And the fun doesn't have to stop. Recreation holds a range of classes throughout the year, including dance and yoga, aerial silks and surfing lessons. And for those who would like to adventure into the wild, they can join Outback Adventures for hiking, snorkeling, backpacking and more.

New and returning students flocked to the field, pool and court to see UC San Diego’s scholar-athletes in action during Triton Weeks of Welcome. Sunday, Sept. 18 marked the largest home game crowd for a women’s soccer home game in the Division 1 era in their match against UC Irvine. The team gained an early lead with a goal from transfer student Natalie Abel, and UC San Diego achieved more shots throughout the game than their opponent (17 total). Triton Soccer Stadium was filled with pride and shouts of encouragement as the game came to a close at a draw.

Three days later, more than 1,300 fans filled Canyonview Aquatic Center to witness the “Battle of the Kings,” an annual match between men’s water polo and Loyola Marymount University (LMU). Students flowed in donning yellow foam crowns, creating a sea of spirit in the stands. The game was full of action, with both teams performing impressively. After two overtime periods, the game ended in sudden victory with LMU taking the lead. Throughout the history of the battle, UC San Diego has won the most games—nine out of the past 16.

On Sept. 23, LionTree Arena was packed with nearly 2,000 people who came to support UC San Diego’s women’s volleyball team in their game against Big West Conference competitors UC Santa Barbara. The game was evenly matched with both teams winning two sets, leading to a fifth set to determine the winner. The arena was alive with applause and cheers as the Tritons jumped and blocked at the net, seemingly flew through the air as they served and dove for the ball for many memorable digs.

These exciting games are just a few of many more planned for this season. For the full game schedule, visit UC San Diego Athletics.