Publisher Springer Nature released an open-access book today in which global experts present climate change as an immediate threat to public health and call for rapid stabilization of the global climate system by bending the curve of pollutant emissions.

Two University of California San Diego scientists, Veerabhadran Ramanathan of Scripps Institution of Oceanography and Wael Al-Delaimy of the School of Medicine are co-editors of Health of People, Health of Planet and Our Responsibility with Msgr. Marcelo Sánchez Sorondo of the Vatican’s Pontifical Academy of Sciences. Creators of the book, available to the public free of charge online, consider it unique in the wide range of its contributors’ backgrounds.

“This book is a product of an alliance between leaders in science, engineering, economics, policy, medicine, and religion, and it is such alliances that can catalyze the sort of transformational change we need to solve the climate change problem,” write the co-editors of Health of People.

“Connection of climate change to health is central because climate change is an abstraction,” writes former California Gov. Jerry Brown in the chapter he authored. “Very few people can actually grasp it—or certainly be moved by it—but the air pollution from carbon emissions is visible and affects people directly. They get that.”

Sorondo, the chancellor of the Pontifical Academy of Sciences, noted that the publication of the book coincides with a call by Pope Francis for day of prayer among people of all faiths for an end to the coronavirus pandemic.

"The book is prophetic because it anticipates what we are currently experiencing with the Covid-19 pandemic,” Sorondo said. “Science shows how much climate influences the spreading of the virus. It is a warning that we have to change and go back to respecting our planet if we want our planet to respect us and our health. Today, all religions in the world unite to pray to God, each according to their tradition, asking Him to free us from this pandemic and asking forgiveness for mistreating the climate. God will heed us if we respect nature and respect our neighbors, according to the Golden Rule, which is followed by all religions.”

The book also focuses on solutions, actions and responsibility. Book contributors point to the need for societal transformation and behavior change in addition to the rapid decarbonization of the global economy to protect “planetary health,” a term that includes not just the health of natural systems but of society as well. Enacting effective carbon pricing will provide the incentives needed to ease the transition but in addition, report editors call for immediate curbs to sources of air pollution. Controls of the super pollutants, methane black carbon and HFCs,  as well as particulate pollution that directly damage respiratory health must be a component of the transition as well.

The book’s origins lie in meetings of the Pontifical Academy of Sciences, a panel of the world’s leading researchers of whom one-fourth are Nobel laureates. Ramanathan has been a member of the academy since 2004. As a member of the governing council of the academy since 2012, he co-convened a series of sessions on the state of nature and society and the moral imperative to protect both.

Those sessions led to Laudato Si, a 2015 papal encyclical in which Pope Francis enjoined society to take heed of what science has observed on the damaging effects of fossil fuel use and soil degradation caused mainly by agriculture. The encyclical was followed by a report by the Lancet Commission on public health effects of climate change and a declaration of the American Meteorological Society that concluded “we are experiencing new weather extremes because we are making a new climate.”

Though production of the book was well under way before this year, Ramanathan said that the COVID-19 pandemic is illustrative of the scenarios presented in Health of People. Several lines of evidence have suggested that environmental factors, especially exposure to pollution, have made certain populations more vulnerable to the virus.

"We are all interconnected,” said Ramanathan. “Emission anywhere can cause warming everywhere and gravely affect the health of everyone. In that sense, it is like COVID-19.  The book documents the huge health co-benefits of solving the climate problem." 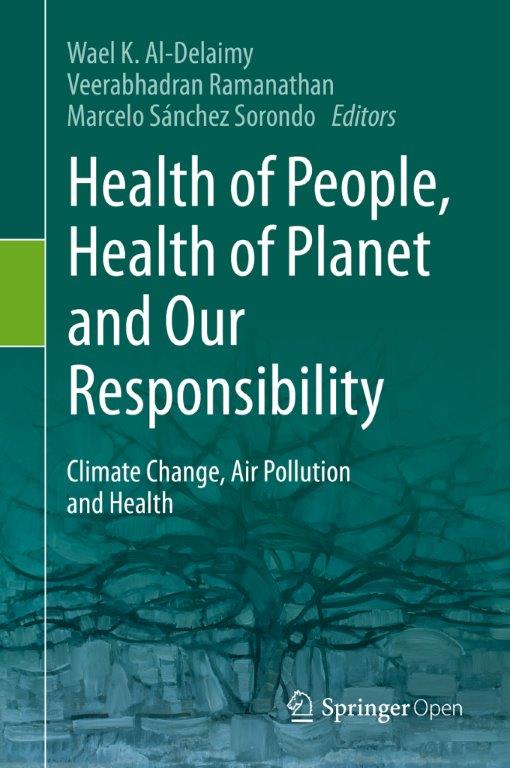 Al-Delaimy said a key purpose of the book is to serve as a reference tool on the kinds of actions needed to mobilize society.  He added that the common thread that will motivate people to read the book and take action “is their health and that of their families and loved ones."

“We are at a pivotal crossroad when it comes to climate change and we must act now to mobilize everyone to understand the risk to our planet and our health,” said Al-Delaimy, a professor and associate director of the Institute for Public Health at the UC San Diego School of Medicine.

"Most people in the world are religious,” said Anderson. “While our beliefs are different we share a common responsibility for the humanitarian needs of our people and planet.  As Christians, we believe God loves our world and we need to reflect God's love in the care of his creation and in the protection of all God's people."

The UC San Diego editors of the book, along with Fonna Forman, a social scientist at UC San Diego and one of the chapter authors, are planning a follow-on event in the fall.