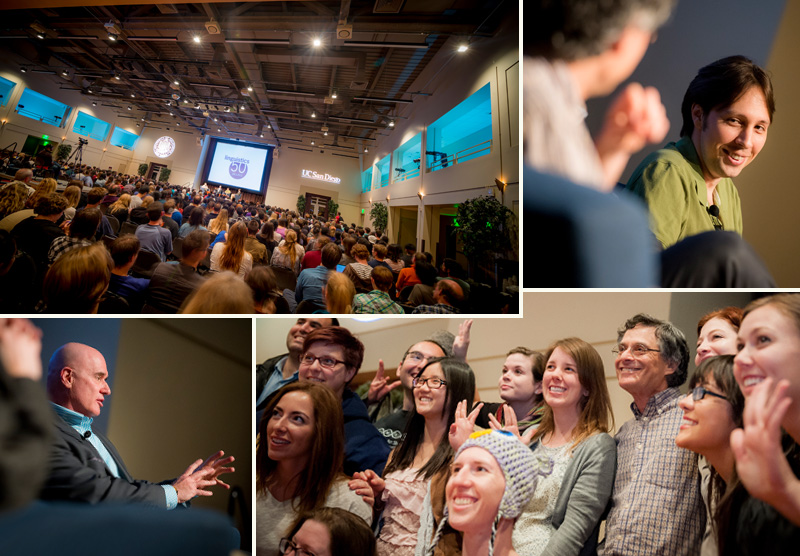 Nobody wore a ridged rubber forehead, or painted their skin Pandora blue. If there were craggy beards and long locks, these seemed more homage to 1960s counterculture than to “Game of Thrones.” Yet the some 700 people who filled Price Center’s Ballroom B last Friday for “Linguistics Goes to Hollywood” were still clearly fans. Fans of what? Not only of the “Star Trek” franchise, the James Cameron film “Avatar,” and the HBO hit fantasy series based on George R. R. Martin’s novels, but also of inventiveness. And playfulness, and craft.

All of that and more goes into making a constructed language, according to the creators of the Klingon, Na’vi and Dothraki languages—Marc Okrand, Paul Frommer and UC San Diego linguistics alumnus David Peterson, M.A. ’05, respectively—who were the evening’s featured guests.

“Linguistics Goes to Hollywood” helped celebrate the 50th anniversary of the UC San Diego department of linguistics. Here are some points of distinction.

Known among hobbyists and linguists as “conlangs,” constructed languages have a long history.

Grant Goodall, UC San Diego professor of linguistics and director of the Linguistics Language Program on campus, moderated the panel. “This idea of inventing languages keeps coming up,” he says, “but for completely different reasons.”

There have been philosophical and scientific reasons, Goodall notes. And there have been such causes as internationalism and world peace—which gave rise to Esperanto (spoken fluently by Goodall since his teens). Then there’s now, when sophisticated audiences demand an unprecedented level of realism and naturalism from their entertainment. Gibberish is a no-go. So are odd-sounding superimpositions on top of an English structure. Only a “real” invented language will do. We can thank Tolkien for that or perhaps Marc Okrand.

Today’s conlangs, says Goodall, who teaches the “How to Create a Language” freshman seminar at UC San Diego, may have small vocabularies, but they are otherwise almost completely indistinguishable from natural languages. And their creators are using everything that language scientists have been so far able to discover—along with a good bit of ingenuity.

Not everyone who creates languages personally identifies with the term “conlanger.”

Okrand, a linguistics graduate of UC Santa Cruz and then UC Berkeley, with a specialty in unearthing and analyzing Native American languages, had never made a language himself until he took a crack at Vulcan for “Star Trek II: The Wrath of Khan.” He was hired in 1984 to develop Klingon (from its original handful of words created by actor James Doohan, aka "Scotty"). And the rest is pop-culture history. Okrand—the author of the international bestseller “The Klingon Dictionary,” who is described by some as the “granddaddy” of contemporary language creation—doesn’t particularly identify with the term “conlanger.”

Same goes for Frommer, the creator of Na’vi. He earned a doctorate in linguistics at the University of Southern California before building a career in the corporate world for ten years. He returned to academia as a business professor. While teaching management communication at USC, he co-wrote a linguistics workbook that he would later send to James Cameron as part of his interview for the advertised job in 2005. Like Okrand, Frommer had not created a language until one was wanted for a Hollywood project. Frommer sees “conlanging” as applying more to the prolific enthusiast.

Peterson, meanwhile, is the conlanger’s conlanger. A cofounder and current president of the Language Creation Society, he has even written something called the “Conlang Manifesto.” He has been creating languages for the sheer love and challenge of it since he (pressured by his mother) took his first linguistics class in UC Berkeley at age 19. That was long before he auditioned for the Dothraki job. Besides working on Dothraki and two new Valyrian languages for the third season of “Game of Thrones,” Peterson is serving as “alien language and culture consultant” for another show: Syfy’s “Defiance.” If that weren’t enough, he has a half-dozen other tongues and writing systems to his name.

Whether they feel they are engaging in “conlanging”or not, all approach their work as a kind of art. And all mention insights into language gleaned from creating one.

Okrand—who jokes about first treating Klingon almost like a prop, not that different from a sheathed plastic knife that photographs pretty well but can never be drawn—has, over the years, become quite passionate about the language. Frommer and Peterson seem to have been serious and meticulous about their languages from the start.

How Do They Do It?

Frommer, Okrand and Peterson all begin with the structure of the language, long before they start inventing words: Deciding on subject-verb order, for instance, or whether verbs will agree with their subjects. Cases. Tenses. What is the possible palette of sounds? The impossible?

“You have to have a lot in place, before you can come up with words,” Frommer says. “You need to think of a framework.”

Peterson compares his process, in the beginning, to a kind of programming or puzzle-solving. Later, when working on the lexicon, or the language’s words, he says the closest analogy is literary. He likens it to writing fiction. 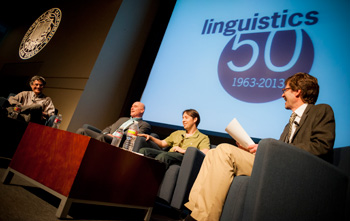 The sources of inspiration and influence vary. To Frommer, Cameron’s original few words of Na’vi seemed vaguely Polynesian and that remains a feature of the language, but he deliberately avoided studying conlangs for fear of too much influence and subconscious copycatting. For Klingon, Okrand picked sounds and structure from existing human languages but only those that were rarest and, often, in combinations that don’t occur on Earth at all. Dothraki is inspired by many of Peterson’s own earlier creations, some of which, in turn, were inspired by such natural languages as Swahili, Turkish and Russian. He credits his graduate morphology professor, Farrell Ackerman of UC San Diego, with influence, too. (He also remembers fondly David Perlmutter from his days at UC San Diego, but the eye-openers on American Sign Language have yet to make a direct way into a televised Peterson creation.)

Peterson also takes into account language evolution, carefully considering possible proto-languages, even if these live only in the archive files of his computer.

All three can’t emphasize enough how important considerations of culture, environment and even biology are to their language creations. The four-fingered Na’vi, for instance, have an octal system for counting, not a decimal one. The Klingon surliness and warrior ethos is reflected in their language, and the nomadic horse culture of the Dothraki is in theirs.

Okrand says that speakers of Klingon – or, more properly, tlhIngan Hol – have anointed him “dictator.” He decides what words are in and which are out. (Or, usually he decides. “Star Trek” scriptwriters sometimes go outside “certified” Klingon, or actors simply goof, and then Okrand figures out a way to reconcile these inventions with the canon.)

Frommer considers himself the “gatekeeper” of Na’vi. The speakers of Na’vi request new words and some even propose them, but Frommer remains the central authority, blessing or passing on coinage.

All three are very careful not to create “native” words that would be outside the fictional worlds. Frommer speaks of not overstepping bounds into realms that are more properly “Cameronian.” (like: Do the Na’vi have a sense of magnetism to go with the other usual five?); Peterson is waiting to see if writer Martin will give a clue on whether the Dothraki keep track of time like a week or a fortnight. 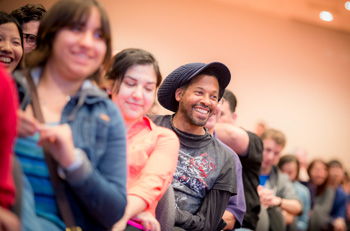 Yet even without the creators creating words that would be foreign to the fantastic or alien people’s worlds, it is remarkable what the language fans can do, Frommer says, armed only with the small-ish vocabularies and the need or desire for a workaround.

Which raises this: Are the creators the best speakers of their own languages? No, they’re not.

Okrand freely admits that some of the members of the Klingon Language Institute, in operation since 1992, speak Klingon much better than he does at this point. Frommer, too, says there are now fans of Na’vi (even though the language is much younger) who use it “with far more creativity and grace than I.”

“If my languages were people,” Peterson adds, “they’d be very disappointed in me.” He’s not as fluent in Dothraki or some of his other inventions as he’d like to be. That’s owing to “a combination of busy and lazy,” he chuckles. He also says that most of his interactions in the languages are online and in written form.

Still, even if in-person gatherings are not frequent, there are undeniable communities that have grown up around the languages—Klingon and Na’vi, especially—and around language creation in general. Peterson’s Facebook group of English-speaking conlangers is about 1,000 strong. And Frommer and Okrand both regularly travel the world for organized meet-ups of Klingon and Na’vi speakers, which are distinct from Trekkie conventions or gatherings like Comic-Con. 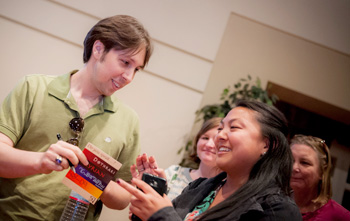 These may not be exactly like the Esperanto clubs of years past, driven by high ideals and recalled fondly by Goodall, but true friendships have also grown out of the more recently created communities.

A Hollywood conlang may look frivolous on the surface, Goodall says, but can function just like any other language: It can connect people. People use it to communicate. “Conlanging points to and asks the same deep and fascinating questions about human languages that linguistics does,” Goodall says.