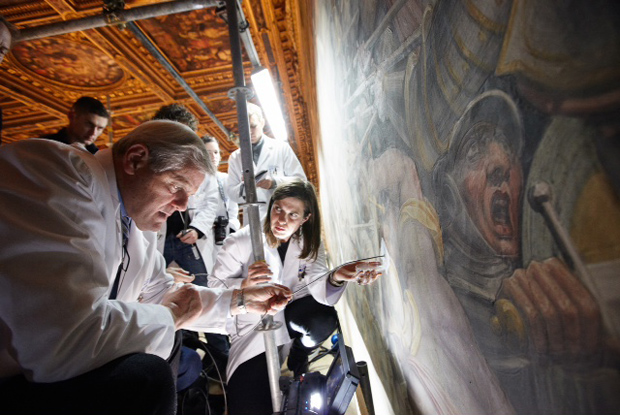 CISA3 researcher and National Geographic Fellow Maurizio Seracini (foreground) and his team view footage captured by the endoscope behind the Vasari wall. All photos by Dave Yoder.

Evidence uncovered during research conducted in Florence’s Palazzo Vecchio late last year appears to support the theory that a lost Leonardo da Vinci painting existed on the east wall of the Hall of the 500, behind Giorgio Vasari’s mural “The Battle of Marciano.” The research team's announcement quickly became one of the top news stories around the world, with more than 100 reporters turning up for the March 12 press conference in Florence.

The story received coverage in The New York Times, BBC, Time magazine, CNN, The Guardian, The Los Angeles Times, The Washington Post and the NBC Today show, among many others. ABC News called the scaffolding where Seracini and his team are working 'the fevered focus of the art world."

The data supporting the theoretical location of the da Vinci painting “The Battle of Anghiari” was obtained through the use of an endoscopic probe that was inserted through the wall on which the Vasari fresco was painted. The probe was fitted with a camera and allowed a team of researchers, led by scientist Maurizio Seracini, to see what was behind the Vasari and gather samples for further testing.

This comprehensive research effort was led by the National Geographic Society and University of California, San Diego's (UCSD) Center of Interdisciplinary Science for Art, Architecture and Archaeology (CISA3), in partnership with the City of Florence. CISA3 is based at the UCSD division of the California Institute for Telecommunications and Information Technology (Calit2). Work conducted in Palazzo Vecchio’s Hall of the 500 was completed in collaboration with the Florentine Superintendency for Cultural Heritage and the Opificio delle Pietre Dure, the Italian state art restoration center based in Florence.

Using endoscopic technology provided by Olympus and Wolff, researchers were able to view the wall behind the Vasari mural and obtain samples for analysis. The data from chemical analysis, while not conclusive, suggest the possibility that the da Vinci painting, long assumed to have been destroyed in the mid-16th century when the Hall of the 500 was completely remodeled, might exist behind the Vasari.

“These data are very encouraging,” said National Geographic Fellow Maurizio Seracini, founding director of UCSD CISA3. “Although we are still in the preliminary stages of the research and there is still a lot of work to be done to solve this mystery, the evidence does suggest that we are searching in the right place.” 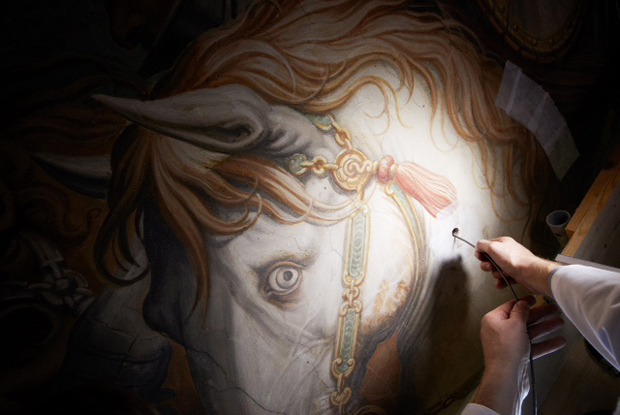 Threading the endoscope into the Vasari wall to find signs of the lost Leonardo painting "The Battle of Anghiari" in Florence's Palazzo Vecchio.

Seracini and his team report four lines of evidence supporting the hypothesis that the lost Leonardo painting is located behind the Vasari mural:

Seracini, an engineer by training and now one of the world’s leading experts in the field of art diagnostics, began searching for the mural more than 30 years ago. In the 1970s, he noticed the words “cerca trova” — “seek and you shall find” — painted in Vasari’s fresco and believed it was a clue to the mystery of the lost Leonardo. Since then, Seracini has conducted laser, thermal and radar scans of the Hall to determine that the likely location of the Leonardo painting is on the selected panel. 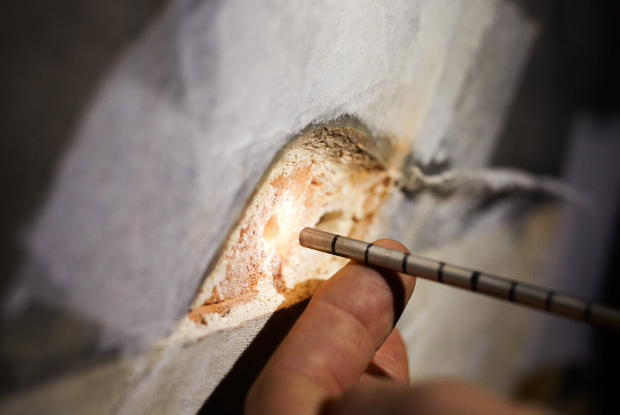 The endoscope and sampling tool used to investigate the air gap behind the Vasari mural in Florence's Palazzo Vecchio.

When presented with the opportunity to conduct an endoscopic investigation through the Vasari wall, Seracini identified 14 areas to be explored. Following ongoing consultation with Opificio delle Pietre Dure officials, six points of entry were ultimately implemented. These entry points were chosen by the restorers of the Opificio delle Peitre Dure in areas free of original Vasari paint, including cracked or previously restored areas, to ensure that drilling would not cause any damage to the original Vasari mural. Opificio delle Pietre Dure officials conducted the drilling, which then allowed Seracini’s team to insert the camera, view the wall behind the mural and obtain samples. Testing on those samples was conducted with portable instruments on the scaffolding itself, in the Florence-based Editech lab and in Pontlab, a private analytical lab in Pontedera, Italy.

“Given that the points of actual entry were on the periphery of our original area of focus, the results we obtained are particularly encouraging,” said Seracini.

“Searching for this lost Leonardo masterpiece, considered by some to have been one of his most significant works, is an important venture for the National Geographic Society, and we are pleased to support the Italian people with this important cultural project,” said Terry Garcia, National Geographic’s executive vice president of Mission Programs. “We’re excited and intrigued by the promising results of this phase of the research.”

In 1503, da Vinci was commissioned by Gonfaloniere Piero Soderini to paint the “The Battle of Anghiari” in the Hall of the 500 of the Palazzo Vecchio, the seat of government in Florence. The painting commemorated the 1440 victory of the battle on the plain of Anghiari between Milan and the Italian League led by the Republic of Florence. The Florentines emerged from the conflict as the most important power in central Italy, re-establishing Papal powers and dominating Italian politics for years to come.

Da Vinci used the commission as an opportunity to experiment with new mural techniques, which did not meet with the results he had hoped for, but nonetheless, this masterpiece was later called “the school of the world.” In the mid-16th century Giorgio Vasari, himself an admirer of da Vinci’s work, enlarged and completely remodeled the Hall and painted six new murals over the east and west walls, possibly hiding the Leonardo masterpiece. Original documents confirm eyewitness accounts of viewing “The Fight for the Standard,” the portion of “The Battle of Anghiari” that was completed by Leonardo.

More information on the project is available at www.nationalgeographic.com/anghiari and at http://cisa3.calit2.net/research/anghiari.php.

The research of “The Battle of Anghiari” will be the subject of the documentary "Finding the Lost Da Vinci," which will begin premiering globally on the National Geographic Channel Sunday, March 18, including a broadcast in the United States that night, and in Italy on Tuesday, March 20, at 9 p.m. on National Geographic Channel HD (Sky platform, channel 403). The Channel can be seen in over 435 million homes, in 173 countries and in 37 languages.

The Italian edition of National Geographic magazine published a story on the “The Battle of Anghiari” project in its February 2012 issue.