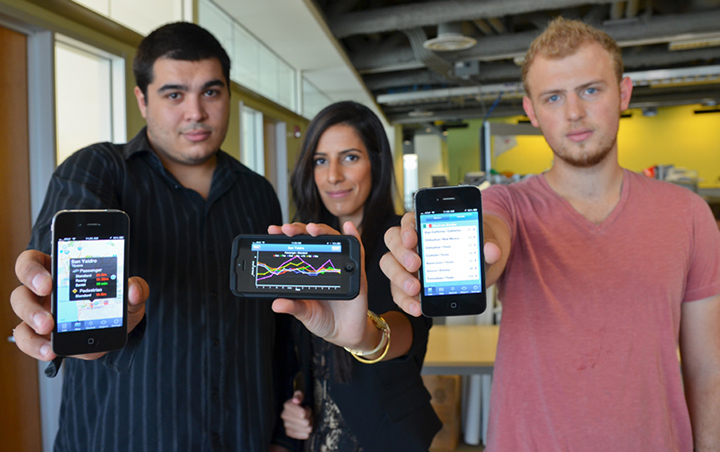 Next time you drive into the United States from Mexico or Canada, you may want to open a new iPhone app and provide an eyewitness account of how long you have to wait. That ‘crowdsourced’ information will then be made instantly available to other motorists and help future border crossers to decide the best time to cross the border by car or truck. This iReport data is meshed with the data on wait times at the border from U.S. Customs and Border Protection (CBP) to improve the accuracy of the wait times.

The new “Best Time to Cross the Border” mobile app is now available in the Apple App store on iTunes at http://bit.ly/P92nNE.

“It includes all of the features first made available to Android app users last April, and in addition, the crowdsourcing component called iReport is also available on the iPhone,” said Ganz Chockalingam, principal development engineer in the California Institute for Telecommunications and Information Technology (Calit2), which publishes both apps, as well as California Wireless Traffic Report apps for iPhone and Android.

“Only commuters who are physically near a port can report wait times for that port,” added Chockalingam. “The app has only been available for a few days, and already commuters have started using this feature and we’ve been collecting user reported wait time data.”

Chockalingam oversaw a team of graduate and undergraduate students from UC San Diego’s Computer Science and Engineering department, who built the iPhone app, including the crowdsourcing feature that allows commuters to report wait times. They included senior Matthew Davis and junior Rodrigo Rallo, and Master’s student Tarfah Alrashed. Tarfah is also a researcher at King Abdulaziz City of Science and Technology (KACST), a government research lab in Riyadh, Saudi Arabia.  Mike Chiu, who is a programmer analyst at Calit2, developed the Web portal (http://traffic.calit2.net/border/). 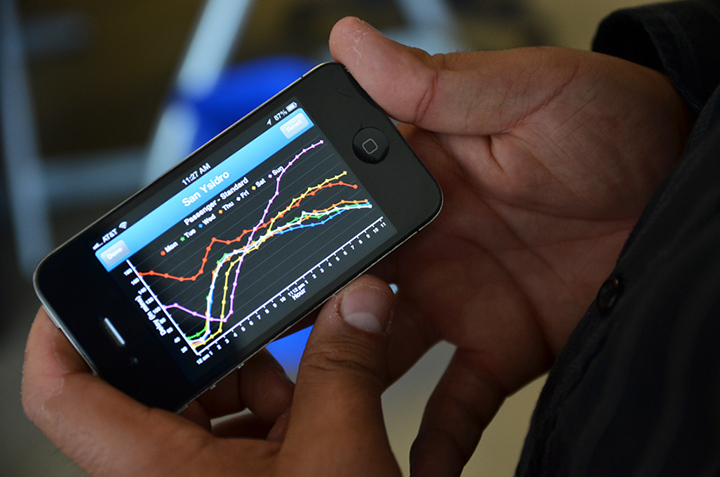 “The students did a tremendous job with the whole design, development and implementation process of the app,” said Chockalingam. “They were extremely motivated in developing a real-world application that could help thousands of commuters. They also did a phenomenal job of pooling their resources and releasing the app in less than three months’ time.”

Some of the early online reviews for the “Best Time to Cross the Border” for iPhone have applauded the new app: “Amazing app! So helpful!” “As a Mexican, I find this app extremely helpful… and I’m pretty sure it’ll be helpful for a lot of people.” “The data is way more accurate than the other app I used to have.”

According to Calit2’s Chockalingam, crowdsourcing information from a cross-section of people crossing the border adds an important extra dimension to supplement the survey that often seemed to differ from the actual wait times. “Crowdsourcing should eliminate the problems that the border patrol has been having with regards to the accuracy of the wait times,” he noted. “We might be able to solve this problem without having to build or deploy any new infrastructure.”

Officials have considered adding more cameras to high-traffic border checkpoints, as well as computer-vision software to automatically capture and calculate how long each car takes to get from the back of the queue to entering U.S. territory. But crowdsourcing offers a way to supplement survey data at no additional cost as long as commuters find the app inviting to use.

“Best Time to Cross the Border” is a service launched last April on the Internet and as a mobile app for Android users (via the Android Market or Google Play at http://bit.ly/RGhheh).  The updated Android version also supports the iReport feature. Very soon, users will also be able to report wait times via the mobile Web. 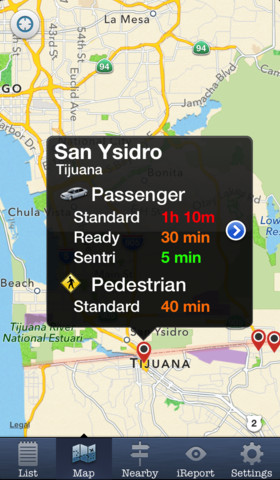 The iPhone and Android apps build on other services that Calit2 offers free of charge to the public, including the California Wireless Traffic Report, which facilitates access to information on commuting times in the Bay Area, Los Angeles, Orange County and San Diego County.

“Travelers routinely run into traffic jams getting into the United States, especially from the most popular crossing points with Mexico,” said Chockalingam last April during the Android app launch. “You may not be able to reduce the congestion, but with a little help from our app, you can make an informed decision about when and where you want to cross the border if time is a factor.”

According to a study by the San Diego Association of Governments and Caltrans, excessive border waits cause $2.5 billion in losses annually to the San Diego regional economy, with typical two-hour delays for trucks at commercial crossings into San Diego County costing the county $455 million in annual revenue from reduced freight activity.

Border wait times are compiled by the CPB and updated hourly. The border agency’s current wait times are supplied by border agents, who survey some commuters about how long they waited to cross the check point. Unlike other applications to help commuters at border crossings, the Calit2 app uses historical graphs to show the commuter the best time to cross. “We average the wait times for the past three months and provide you with historical trends,” said Chockalingam. “It also provides you with the maximum and minimum wait times for any port.”

Users of the iPhone will now be able to correlate the historical information with near-real-time iReports from commuters who may have crossed the border as recently as in the past hour, or at the same time and same border crossing a week or a month earlier. The historical graphs are typically updated several times a day. The graphs depict data from the past three months to show the average border wait, for every hour, and each day of the week (including weekends) at each border crossing.

The average wait can vary substantially. At the high-traffic San Ysidro (Tijuana) crossing into San Diego last week, the app estimated the border wait on a Monday at 8 p.m. to take 106 minutes, while three hours later the average waiting time drops to 71 minutes.  In other words, having that information on a smart phone could save the motorist more than half an hour – so it might make sense to arrive at the border later.