$450,000 Gift from the Robertson Foundation for Government Continues to Create Opportunities for UC

For University of California, San Diego graduate student Chas Culverwell, the only thing that made his summer internship with the U.S. State Department at the American Institute in Taiwan even more extraordinary was the fact that he was able to take his wife, 2-year-old son and 4-month-old daughter with him.

“I had a wonderful experience interning for the State Department, but having my family with me made all the difference,” said Culverwell, who is a student at UC San Diego School of International Relations and Pacific Studies (IR/PS). “We learned a lot together and, most importantly, we had a successful test run at living abroad with our family, which will be very important if I choose to work for the Foreign Service in the future.”

Culverwell may not know if he will work for the State Department after he graduates, but he does know that he will work for the U.S. government. Working for the federal government for at least three of the first five years after graduation is one of the requirements that students chosen to participate in the Robertson Fellows Program must meet. Culverwell is one of six IR/PS students named Robertson Fellows over the last two years thanks to a $450,000 gift from the Robertson Foundation for Government. The gift, pledged over four years, covers expenses for outstanding students to complete their master’s degree at IR/PS.

Established in 2010, the Robertson Foundation for Government (RFFG) will invest several million dollars annually to provide funding for scholarships, graduate fellowships, mid-career training programs and other initiatives to address the talent needs of the federal government in the areas of foreign policy, national security and international affairs. RFFG is one of the only private foundations in the country to support students interested in pursuing federal government careers.

“We need talented students like Culverwell and the other Robertson Fellows in the federal government now more than ever before,” said William Robertson, RFFG chairman. “It is the foundation’s mission to train some of the finest candidates to serve in the U.S. government, in the international arena, and allow those candidates to start the job without being tens of thousands of dollars in debt.”

Culverwell and fellow IR/PS students, Katy Donovan and Sharon McCoy, were the inaugural Robertson fellows in 2010. Three more students have now also been named to receive the honor this school year. They include: 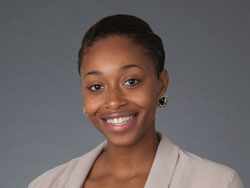 Sadé Diké, a graduate of Howard University with a BA in Communications, recently completed an internship with the Central Intelligence Agency on the economic development of Brazil, Russia, India and China. She studied abroad in Egypt and at China’s Nanjing University. She has also been involved in domestic and international tutoring and education programs for school age children in the U.S., Nigeria, China and Spain. In 2009, she was a named a State Department Rangel Undergraduate Scholar. Diké plans to work in public policy with a regional focus on China and is fluent in Mandarin Chinese. 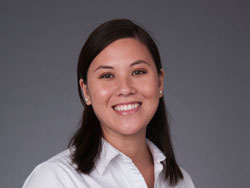 Marian H. Nguyen, a graduate of California State University, Fullerton, with a BA in Business Administration and a concentration in marketing, served as a Peace Corps Volunteer in Peru from 2008 to 2010. She worked to promote small business development and better business practices in rural areas. Her primary project focused on the economic development of a women’s artisan association. Nguyen plans to work in international development with a regional focus in Latin America. She is fluent in Spanish. 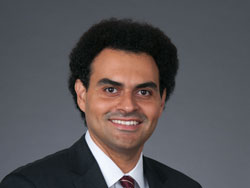 Adrián Pavía, a graduate of University of California, Berkeley with a BA in English/Peace and Conflict Studies, worked as a business analyst for the Los Angeles Unified School District. In addition to his work with the school district, he has also worked for the Center for Asian-American Media in San Francisco. Pavía plans to work in international development with a regional focus in Latin America. He is fluent in Spanish.

“Thanks to the generous gift from the Robertson Foundation, we can continue to attract exceptional talent to IR/PS,” stated Dean Peter Cowhey. “These students could then go on to fill a critical need for high caliber employees for the federal government.”

To learn more about IR/PS and the Robertson Fellows visit www.irps.ucsd.edu