In a bold and singular step toward delivering the therapeutic promise of human stem cells, businessman and philanthropist T. Denny Sanford has committed $100 million to the creation of the Sanford Stem Cell Clinical Center at the University of California, San Diego.

“This gift and the creation of the Sanford Stem Cell Clinical Center will further UC San Diego's leadership in stem cell science and therapeutics, and advance our region's reputation as an international, collaborative hub for stem cell research," said Pradeep K. Khosla, chancellor of UC San Diego. “This Center will support the goals and vision of our strategic planning process by translating discoveries into therapies that will improve and save lives."

The Sanford Center will accelerate development of drugs and cell therapies inspired by and derived from current human stem cell research; establishing, promoting and disseminating clinical trials and patient therapies that will help more quickly transform promise into reality.

The Sanford Center will integrate operations at four locations: the UC San Diego Jacobs Medical Center and a nearby proposed clinical space, both scheduled to open in 2016; the UC San Diego Center for Advanced Laboratory Medicine (CALM); and the Sanford Consortium for Regenerative Medicine (SCRM). It will provide essential physical and human resources needed to leverage stem cell research currently being conducted at the Sanford Consortium – an innovative “collaboratory” of San Diego scientists from UC San Diego, the Sanford-Burnham Medical Research Institute, the Salk Institute for Biological Studies, The Scripps Research Institute and the La Jolla Institute for Allergy & Immunology – and other institutions on and around the Torrey Pines mesa, such as the J. Craig Venter Institute.

“Every day, scientists learn more about the regenerative powers of stem cells, which tantalize with their potential to treat, cure, even prevent, myriad afflictions, including cancer, Lou Gehrig’s disease and spinal cord injury. I see it in the amazing collaborative advances by researchers and doctors in the Consortium and across the La Jolla mesa,” said Sanford. “I believe we’re on the cusp of turning years of hard-earned knowledge into actual treatments for real people in need. I want this gift to push that reality faster and farther.” 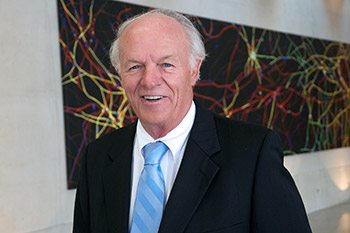 In 2008, Sanford donated $30 million for the development and construction of the Sanford Consortium for Regenerative Medicine facility, which opened in 2011. His gift to create the Sanford Stem Cell Clinical Center is the second largest donation received by UC San Diego in its 53-year history, following only the $110 million gift by Joan and Irwin Jacobs to endow the UC San Diego Jacobs School of Engineering.

Since 2006, the California Institute for Regenerative Medicine (CIRM), the state’s stem cell agency, has awarded UC San Diego scientists more than 60 grants totaling almost $138 million, with millions more given to other area institutions. Lawrence Goldstein, PhD, professor in the Departments of Cellular and Molecular Medicine and Neurosciences, director of the UC San Diego Stem Cell Program, and scientific director of the Sanford Consortium for Regenerative Medicine, said funding from CIRM and elsewhere has already helped push some stem cell-based projects into early clinical trials, with more nearing readiness.

“Clinical trials are not the finish line, but they are essential to advancing the science and ultimately creating much-needed drugs and therapies,” said Goldstein, who will also serve as director of the new Sanford Center. “We have made profound progress in understanding the basic nature and abilities of stem cells. We know a great deal about how they work and differentiate and, in a number of cases, how to make them become the kinds of cells we think we need. Now we have to put that knowledge to the test in people, for people.”

A great deal of the progress in stem cell research has occurred at UC San Diego School of Medicine. For example: 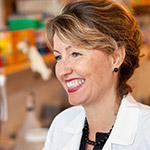 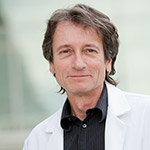 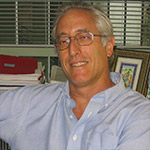 Goldstein’s lab has created, for the first time, stem cell-derived, in-vitro models of sporadic and hereditary Alzheimer’s disease using induced pluripotent stem cells from patients with AD. These functional Alzheimer’s neurons in a dish promise to be an unprecedented tool for developing and testing drugs to treat the dreaded neurodegenerative disorder.

The Sanford Stem Cell Clinical Center will advance these and other stem cell projects in crucial ways, said Goldstein, accelerating their movement into clinical trials with patients. The Center will deepen the connection with stem cell research partners in San Diego, allowing them to collaborate with one of the country’s leading academic medical centers. It will establish the best standards in stem cell testing, safety and efficacy. It will effectively tackle the necessary regulatory requirements. All of these efforts, Goldstein said, are critical to speeding experimental therapies to use by patients.

“On behalf of the University of California, I join with the UC San Diego campus in thanking Denny Sanford for his incredible generosity and visionary leadership in committing $100 million to create the Sanford Stem Cell Clinical Center. This magnanimous gift will markedly advance stem cell science, allowing researchers to accelerate the development of clinical trials and patient therapies that could benefit millions of people.

“Just three weeks ago, I visited the UC San Diego campus and was impressed with the talent and collaboration of its scholars and students, and the quality of research. UC San Diego is a leader in this emerging field, and the campus has helped the San Diego community gain an international reputation as a regional hub for stem cell science.

“This gift is a tremendous act of generosity, kindness, and hope and it will propel our researchers on their path to fulfill the promise of stem cell research.”

“This significant philanthropic gift from Mr. Sanford, combined with funding from CIRM and elsewhere, puts UC San Diego in a unique and advantageous position,” noted David A. Brenner, MD, vice chancellor for Health Sciences and dean of the UC San Diego School of Medicine. “We are the only academic medical institution in the region with the scientists, physicians, facilities and clinical delivery system to bring the promise of stem cell therapies to fruition. No place in the world has a better chance of success.”

Sanford’s donation is the latest in a history of philanthropic largess. In his lifetime, he has given more than $1 billion, primarily to health- and children-related causes, often in his native state of South Dakota. In 2007, for example, he announced a $400 million gift to the Sioux Valley Hospitals and Health System for various health care and research initiatives.

In San Diego, Sanford and his foundation donated $20 million to the Burnham Institute for Medical Research in 2007 and issued a $50 million challenge grant three years later to the renamed Sanford-Burnham Medical Research Institute.

Note: Additional background information, websites and images can be accessed at http://health.ucsd.edu/news/Pages/sanford-media.aspx