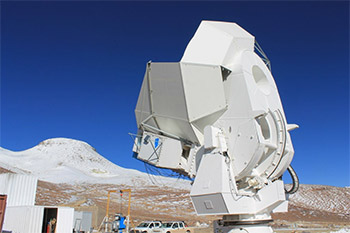 It's the faintest light, yet it carries information from the beginning of time.

A telescope trained on the Antarctic sky has picked up swirling patterns of light believed to be the imprint of the violent expansion of the universe a trillionth of a second after it burst into being.

Excitement swept the scientific community following the March 17 announcement, tempered by caution. If the signal is real, the discovery is the first evidence of an idea proposed three decades ago and possibly worthy of a Nobel Prize. But before any prizes are awarded, the finding must be confirmed by another instrument.

Brian Keating, an associate professor of physics at UC San Diego and a member of the team that made the discovery, also leads another project that could make those necessary observations, and more.

“POLARBEAR is poised to confirm the findings of the BICEP2 telescope, but will also measure masses of cosmic neutrinos, the ‘ghostly messengers’ of the Big Bang,” says Keating, who leads this multi-institutional collaboration along with Adrian Lee, a professor of physics at UC Berkeley.

Despite its name, POLARBEAR is based closer to the equator than either pole, and there's nothing ursine about it. The name is a play on the signal the telescope was designed to detect: polarization of background radiation. That is, the cosmic microwave background radiation, the afterglow of the Big Bang that pervades the entire visible universe.

That ancient light was trapped in a fog of particles for 380,000 years until the cosmos cooled enough to allow the first atoms to form and light to escape. Like the glare of light glancing off of the surface of a lake, this early light carries an imprint of the texture of space in its patterns of polarization.

Distinctive swirls in that pattern are what caused all the excitement a few weeks ago. This curling light is just what cosmologists expected to see, a trace left by gravitational waves – ripples in the fabric of space – wrought by the faster-than-light ballooning of the universe in its first moment.

It's also a signal to probe for details of how this epoch in the history of the universe, invisible to us before now, unfolded. POLARBEAR is set to be part of that exploration, and to extract even more information from these wispy signals.

The sign of inflation is like a palimpsest, a faint primordial trace obscured by the influence of more recently formed structures – clusters of galaxies and even dust in the Milky Way. These subsequent traces were carefully peeled back to reveal the original imprint of inflation, but they aren’t noise.

Instead, the cosmic microwave background radiation acts like an enormous backlight that can reveal the composition of the universe. Measuring that composition will lead to further fundamental discoveries such as the masses of neutrinos, notoriously aloof particles that rarely interact with other matter, making their capture nearly impossible.

Right now, the POLARBEAR project has a single telescope that has been scanning the sky since January 2012. By the end of 2015, it should be joined by two more, collectively the Simons Array, which will boost its light-gathering power, allowing it map and measure the contents of the universe and to delve deeper into the question of what happened at the beginning of time.