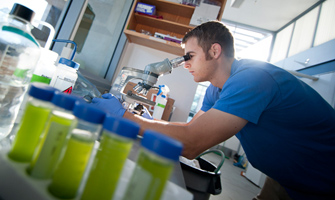 Scientists at UC San Diego are among the workers in the region transforming algae into transportation fuels. Photos by Erik Jepsen/UC San Diego Publications

Despite the sluggish economy, San Diego’s research efforts to produce new transportation fuels from algae continue to grow at a rapid pace, generating more than double the number of jobs for local workers in 2011 than were available in the region just two years ago.

A study conducted by the San Diego Association of Governments, SANDAG, and released this week by its service bureau found that “research in algal biofuels employed 466 workers in San Diego and provided more than $41 million in payroll and $80.9 million in economic activity for the San Diego region in 2011.”

“Algal biofuels continues to show strong growth in the region, despite the sluggish economy,” the agency said in a letter summarizing its study. “The number of jobs in 2011 is an increase over the 410 jobs identified in 2010 and is more than double the number of workers (215) in 2009.”

The SANDAG study found that 366 employees are presently engaged in private sector research in algal biofuels in the San Diego region with an additional 100 academic faculty and research assistants. Their purchase of goods and services in the region generated an additional $32.9 million in additional economic activity in the region in 2011.

Stephen Mayfield, a professor of biology at UC San Diego and director of the San Diego Center for Algae Biotechnology, a consortium of regional research institutions and companies known as SD-CAB, said the growth in jobs over the past two years is a consequence of the investments made in the region’s basic research laboratories to demonstrate that transportation fuels can be made from algae in a commercially viable way. 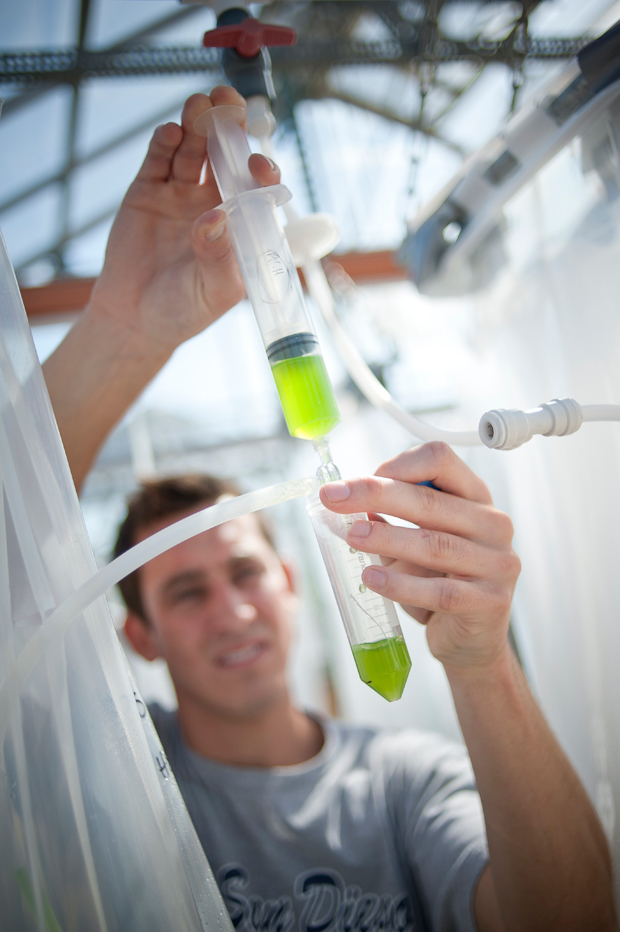 “The research in the laboratory worked,” he said. “We got algae to grow fast in the laboratory, we got that algae to make significant amounts of oil and we found a way to extract that oil to make fuel. The proof of concept is done and now the algae biofuels industry is starting to build commercial facilities that will demonstrate economic viability.”

Mayfield said the completion of those commercial facilities, the first of which is expected to be completed this summer, will provide a further economic boost to the San Diego region and generate even more jobs for biofuel workers as local companies figure out the most commercially viable way to turn the crude oil extracted from algae into diesel or gasoline.

To prepare for this explosion of jobs, a consortium of local groups have been training biofuel workers at UC San Diego and Mira Costa College with a $4-million grant from the state’s Department of Labor under the EDGE Initiative—Educating and Developing workers for the Green Economy. The grant involves the work of a number of local partners, which include UC San Diego, UC San Diego Extension, San Diego State University, Mira Costa College, SD-CAB, CleanTECH San Diego, BIOCOM Institute, BIOCOM, San Diego Workforce Partnership and the San Diego Regional Economic Development Corporation.

“The purpose of this program is to ensure that we have a locally trained workforce that is able to support the biofuels industry in San Diego,” said Jason Anderson, vice president of CleanTECH San Diego. “The updated economic impact numbers prove that the bioenergy sector is growing and creating jobs. Our biggest challenge will be to keep those jobs in California.”