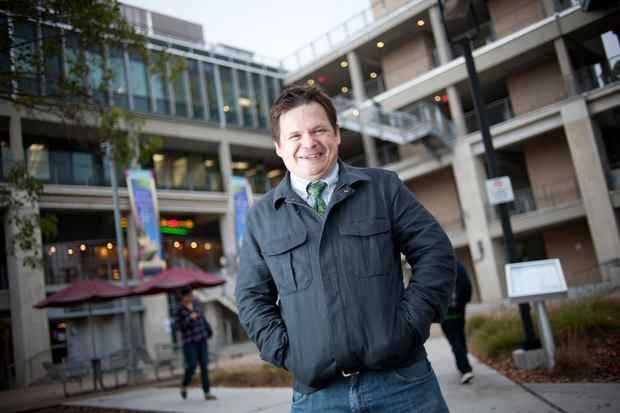 U.S. Army veteran Barrett Blake is set to graduate this spring with a degree in theatre and plans to pursue a career in acting and stand-up comedy. His journey to earning a bachelor’s degree has spanned over 16 years—but he wouldn’t change a thing.

Years ago, after dropping out of Hunter College with just one semester completed because he lacked financial resources, Blake joined the armed forces in the tradition of his father and grandfather. Blake spent one year in South Korea and four years in a high-level assignment in Washington D.C. Today, service—to the country, the community and the world—is a passion for Blake. For that reason, UC San Diego was the ideal fit for the charismatic veteran. The campus is ranked by Washington Monthly as the nation’s top school for positive impact on the country.

“I am so grateful to be a student here because of the values at the school,” Blake said. “I am excited about graduating and, even after I leave UC San Diego, I will remain a Triton just like I will always be a soldier.”

A Triton, and A Soldier
An Essay By UC San Diego
Student Barrett Blake

My name is Barrett Blake. I am 35 years old and am originally from New York City. I joined the U.S Army in 1996 after completing one semester at Hunter College. Unfortunately, after my first college semester, I ran out of financial resources to continue.

So, as I reflected on my grandfather Milton’s U.S Army service in World War II, for which he was awarded a Purple Heart, and that my dad was also in the U.S Air Force, I knew that joining the Army would be the right thing to do. I served in the U.S Army for five years, one year in South Korea, and the others at a high level assignment in Washington D.C.

After I was honorably discharged from the Army in August 2001, I packed my bags and moved to L.A in hopes of becoming a movie star (one can always dream!). September 11th happened soon after and as a New Yorker, I had hoped they would call me back to into service. Though I never received those orders, in hindsight I am grateful that I got out of the military when I did.

After working at some odd office jobs in L.A for a while, I finally decided to pursue my education again and began attending Santa Monica Community College in 2004. Due to another extended break to work in corporate America, in 2009 I finally earned my Associate’s Degree in Theatre Arts. That is also the year that I was fortunate enough to be accepted into UC Berkeley, UCLA and UC San Diego. I chose to go to UC San Diego because of its beautiful and ideal location—really, it doesn’t get much better then La Jolla.

Initially I was a declared communications major because I felt I wanted to pursue something more practical than theatre. I learned quickly, though, to stick to doing what I am passionate about. I am now a theatre arts major at school, entering my final year.

The journey to earning my B.A. has been a long one, sixteen years to be exact, but I wouldn’t change a single step. I am so grateful to be a UC San Diego student, because the values at the school—which is ranked number one in public service and number three in environmental awareness—are ones I care about.

Also, this past year I had the opportunity to attend the Clinton Global Initiative University meetings; it was there that I felt my life had come full circle because Bill Clinton was the president I served under in the U.S Army. To be able to participate in such an amazing weekend, with students from other great universities like Yale, Harvard, and even the University of British Columbia, was incredible.

I am so grateful to be a UC San Diego student, and no matter what happens afterwards, I will remain a Triton, just like I will always be a Soldier.

In recognition of the courage and sacrifices made by made by military veterans like Blake, UC San Diego’s 2011 Veterans Day activities carries the theme, “Honoring Our Veteran Students,” and will be celebrated Nov. 7-11 with various events.

“It’s especially an honor to celebrate Veterans Day as we welcome more and more student veterans to our campus,” said Penny Rue, vice chancellor of student affairs. “They bring a lot of life experience to campus, they have a better understanding of how the world works and they have a strong service ethic. But first and foremost, we strive to educate these students because it’s the right thing to do.”

Many of the week’s events were organized by UC San Diego’s Student Veterans Organization (SVO) (http://studentvets.ucsd.edu).  “Student veterans are very service-oriented,” said Benjamin Seaman, vice president of UC San Diego’s SVO, which supports missions of improving life for student veterans and community service.  “Whether it’s something that directly benefits veterans such as volunteering at the VA Hospital or giving to the community, nearly every veteran I know is involved in some form of community service.”

Jessica Huerta, who graduated from the university in June 2011 with a degree in sociology, said one of the reasons she decided to attend UC San Diego was the campus’s strong track record for commitment to service. She is an Air Force active duty veteran and currently serves with the California Air National Guard.

“I was drawn to Thurgood Marshall College,” Huerta said. “The college encourages students to be scholars and citizens just like the National Guard motto ‘soldier and citizen.’”

The UC San Diego Student Veterans Organization will present a variety of activities on in honor of Veterans Day:

The UC San Diego Veterans Association (http://blink.ucsd.edu/sponsor/veterans) —which is open to faculty, staff, students, alumni and community members to raise awareness and promote respect and appreciation for the sacrifices and contributions made by U.S. Armed Forces veterans—is sponsoring:

UC San Diego consistently ranks among the top military-friendly schools in the country based on the university’s efforts to assist student veterans with new initiatives such early enrollment privileges, financial aid benefits and the additional support of student veterans.  In September, six University of California campuses, including UC San Diego, were lauded by G.I. Jobs magazine for offering veterans “the best education, value, and welcome” among U.S. colleges and universities.